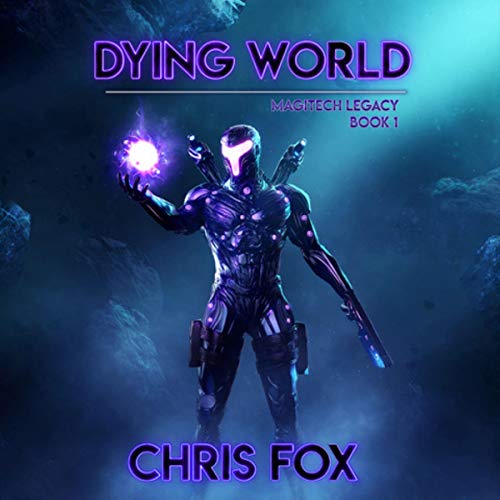 Our world is tumbling into the sun.

The quakes have leveled cities. Soon the continents themselves will break apart. The ships are gone. There's no way off. But I'm not giving up. I'm a Relic Hunter...an archaeologist with a gun, and I have a plan.

Our people arrived on Kemet thousands of years ago in the wake of a terrible space battle. The Great Ships are still up there, ancient derelict hulks powered by a combination of technology and magic, created by gods we no longer remember or understand.

A brand new series in the Amazon Bestselling Magitech Chronicles universe. Magitech Legacy begins several months after the events of Godswar, and as the series unfolds you’ll encounter your favorite heroes from the perspective of a new protagonist!

Want to make your own characters? The Magitech Legacy uses the Magitech Chronicles RPG system, and allows you to be part of the action long after you finish the books.

What listeners say about Dying World

This is a different Science Fiction story with magic and Ancient Gods, lots of action and humour. Plots behind plots. A Saga with so much going for, and just gets better and better. Thanks Chris!👍

Start of an Absolutely Outstanding Series!!

How do you top a series of 7 books spanning across a galaxy, multiple planets (several of which got blown or torn apart), Dragons, Mages, More Magic than you can fling a Fireball at, Demi-Gods and Gods, and Mortal Beings being elevated up to the status of Gods!! Not to mention some of the most outstanding Tech you will ever read in a Sci-Fi novel AND, even better, combing the two so you have spell casting rifles and pistols.
How do you beat that??
Well quite simply you can’t, Magitech Chronicles was one of the most Epic series in the genre to date.
Although this book takes place not long after the events of those in the final book of the Magitech Chronicles Series, ‘Godswar’, I am willing to go out on a limb and say you could get away without having read the Magitech Chronicles and starting this fresh. Whilst you will miss out on some references, or bits along the way, it is not enough that you will feel that you can’t get enough out of the story to enjoy it. (Of course, it is totally worth going and reading the other 7 books first as they are just so damn good!). I am also not sure of how much you will miss in future books, but in book 1, you can get away with it!
This book follows young Jerek, who is kind of like Indiana Jones, if Indiana Jones looked like Sheldon from Big Bang. Jerek is very smart, very clever at his job, a great archeologist, and is very good at a lot of different things, but strength and athletics are not 2 of these. Having only just graduated from the Academy, and looking for work, Jerek leaps at the opportunity to become a ‘Relic Hunter’.
A Relic Hunter is a crazy person who is part of a small crack team that break into the hulks of wrecks in space to find anything valuable. Their employers get the lions share, but they get to keep a percentage.
Whilst it seems like easy money, there are risks in the deep of space, crews are not alone, there are things out there that don’t like ‘Relic Hunters’, such as Lurkers, or booby traps on the wrecks, ancient A.I. that don’t like being tampered with, or competition that wants what is in the hulk more than you do.
Jerek’s Dad, Dag, who was once famous as an Arena champion, but is now only famous for screwing up on a mission, and losing his legs and getting most of his team killed, is dead against Jerek going. But he goes anyway as he needs the money.
It is on this mission that things happen to Jerek that change the course of his life.
First off, he finds a suit of Armour, ancient armour, long forgotten armour, and when he puts it on, he is immediately in contact with something. He also learns that his team is being shredded, all dying, and he has to escape.
As he escapes, he sees a comet coming towards the planet, and notices that it is under the influence of Magic, and it is on a collision course for Kemet.
And this is where things get really interesting for Jerek.
Suddenly, he works out that he is on a ‘Dying World’ (Hey, funny that, given the title and all…), but he also finds out that the armour is linked to the ship that he got it from, and that this is part of something much bigger than he originally thought.
He, his Dad, his friend Briff (a Dragon Hatchling), as well as some others (I’ll let you read about them so as to not give away spoilers), are now in a brutal struggle that is life and death, to not only make it off the planet, but find out the truth about what is happening.
Fox has created yet another exceptional series, using the amazing Universe he created in the Magitech Series. This allows for this unique blend of Magic and Technology that was so brilliant in the original series to again be utilised in this series, but it can be expanded upon, with such cool things as the Heka Aten Armour, as well as all the Magic we know.
The great thing about Fox’s writing is his Characters though, as he creates such in-depth and well-rounded characters and uses them to tell the story, allowing them to develop nicely. This has always been one of his strengths, and it has only improved with each series, from the Void Wraith Series through to now, his character writing continues to be the highlight of the books.
Dying World is the first in what is going to be an outstanding series, now is the time to get onboard!!
Ryan Kennard Burke is a true Master at the art of Narration, and makes it seem easy when performing Chris Fox’s books. He does such an amazing job of narrating the characters, giving them such easy to understand voices, with clear and concise speaking voices so it is easy to understand what they are saying. Each character has a nice distinct voice so that you can tell who is speaking just from the character, without having to be told who is speaking. Best of all is the brilliant emotive content that Burke manages to convey, whether it is just bored apathy at being given a stupid job, or terrified fear, as lurkers come chasing after you and are going to rend you limb from limb, Burke conveys these emotions quite clearly in his characters voices. He is a wonderful Narrator, and does an outstanding job with every single one of Chris Fox’s books – so much so, that it is far better listening than reading these books!!

If you haven't read the Magitech Chronicles or Void Wraith books by Chris Fox, stop reading this and go read them! But pick up this one too and read before or after, it doesn't matter. Chris' stories do relate to others but not in a way you must read them in a specific order. I read the Magitech Chronicles first and absolutely LOVE them and it was a joy to read this one as well. We get a new group of heroes in the same universe, where magic and technology are used hand in hand. And the narrator, Ryan, does an excellent job with the characters and story. Ryan voiced the Magitech Chronicles and Void Wraith as well, which really helps you feel you are still in that same universe. He mentions in his books he is also developing a pen and paper RPG based on these stories and if you enjoy that type of game, check it out! You can see the love he has for the worlds, peoples, the content and even his fans. Please do yourself the favor, get this book (even if your first Chris Fox book) and enjoy yourself.

A Must listen to in the next series

The story line picks up after Mag-Tech and just rolls from the get go. The new characters are awesome. I also loved how he tried in the old with the new.
The story flows effortlessly and kept me wanting to finish it in one setting....

The narration was just OUTSTANDING!!!!

Now I can't wait until the next one hits...

Loved the Magitech Chronicles and can't wait to finish the Legacy series. this book is awesome.

excited to listen to the rest of the series.

I love this fictional universe.... it's got tech, magic, and dragons.... what's not to love?

Half way into the book already and it feels like a fresh yet classic feel to the old books from the magitech chronicles. New first person perspective when it involves the main character, and having recently listened to all 7 of the magitech chronicles it threads right into the overlaying theme and plot of the old books but in a new direction. The world Chris Fox has created is everything I've ever wanted in blending scifi and fantasy and it's done in the best way possible!

Want them all in paper or hardback

Title says it all.
Very good addition to the series. Love the interplay of some old characters and upbringing of new... the family dynamic is a bit harsh but no more than what people already do these days.

Overall: A fine addition to the Audible library

It’s time to get your sci-fi fix

So this is a book in the universe that is Magitech. It’s time to get your geek on. This is great sci-fi mixed with a magical element in the form of blending magic and technology including sentient weapons and ships. There are a bunch more books in the universe and even a table top rot game available based off of the universe. Here you have a down on his luck aspiring mage/warrior/scavenger searching derelict ships for valuable objects. He finds more than he bargained for when he gets a sentient magic armor that will prove to be life saving for him and others and also to set them on a path that will lead to destiny. I was voluntarily provided this free review copy audiobook by the author, narrator or publisher