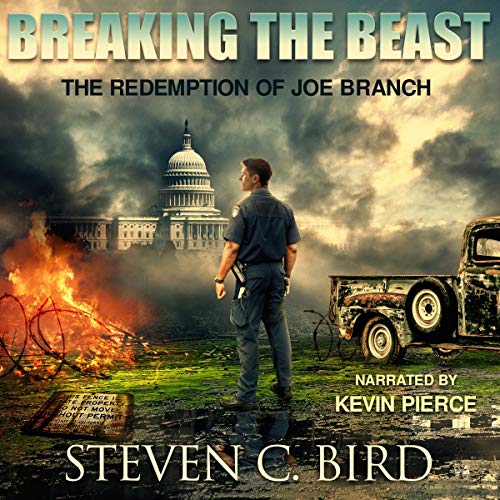 By: Steven Bird
Narrated by: Kevin Pierce
Try for £0.00

Former DC Capitol Police Officer Joe Branch found himself conscripted into service with a new global authority that quickly emerged to save humanity from the brink of extinction following the most significant crisis in human history. Once inside the beast, he became aware that the crisis was the product of the largest, most far-reaching conspiracy in the history of the world.

Can one man make a difference? Can Joe Branch, an average guy caught up in the middle of it all, walk away from everything he has left to try and right the wrongs perpetrated by his new masters?

What listeners say about Breaking the Beast

My first book by this author and I enjoyed it, the pace was great and the characters were likeable.
The story had a new twist which I'd not read before.
I'd certainly read more in the series!

I really liked this story! It shows how far many people are ready to go to help others, and not just how awful people can be to get more power. Recommended!

Highs and lows of excitement

This book follows the adventures of Joe Branch as he starts his journey from a former police officer in Washington DC to a deserter who travels most of the way across the United States to provide information and samples to the resistance in an effort to overcome the One Word Authority. He is forced to fight his way across the country and is troubled by the sacrifices made by many others who assist him in his journey.

This story is well written and backed fact factual historical data that I found interesting as well. The mental anguish Joe suffers is real and you can almost feel his torment. There is never a chapter when there is not some danger that must be faced and overcome and many times you are sure it will be the end of the line for Joe and his companions.

The narration of Kevin Pierce is outstanding. He does an excellent job of voices for the multiple characters as well as putting emotion into the narration.

This book was provided free of charge and this review was done with enthusiasm also.

Breaking the Beast: The Redemption of Joe Branch is written by Steven Bird. The narration is provided by Kevin Pierce. Breaking the Beast by Steven Bird is just a fantastic audiobook. This is a possible dystopian future where a one-world government has taken over. Joe Branch is a lucky survivor of a virus that killed a major part of the population off. As a Former DC Capital Police Officer, he is conscripted into the service of the new Global Authority. The same Global Authority that saved mankind with an antiviral cure that holds the virus at bay. The anti-virus needs to be given at regular intervals. Thus keeping the remaining population in check and killing off those undesirables and deplorables who do not get with the global agenda. The story holds the listener's attention with action, drama, and plenty of mystery as the conspiracy unfolds.

The narration by Kevin Pierce was once again just outstanding. Mr. Pierce always delivers the most fantastic audio performances. The production quality of this audiobook is also of the highest quality. I heard no problems during the entire performance. There were not any detectable flaws that I was able to hear during the entire performance such as loops, breaks, or buzzing. The production was crisp and clear. Steven Bird delivered an excellent audiobook production. I was given this free review copy audiobook at my request and have voluntarily left this review.

I listen to quite a few post-apocalyptic books, and am glad when its Kevin Pierce. To me he is the voice of the Apocalypse, and if the SHTF in real life, its going to be his voice narrating my story.

This book was written as a self contained action story. Its not a to be continued serial novel, which is a nice change from most in the genre which tries to fill your mind of 'how to survive' type of scenarios explaining equipment used, etc. The pace was very fast, which is my only complaint, they sure endured a lot in a few days- I would be exhausted.

I enjoyed the story, and listened to the audiobook in one shot while traveling, I would purchase Steven's stories in the future.

This book is so close to what we are seeing in headlines today! Excellent story. I can’t wait for book 2.

A Good Guy becomes a Bad Guy to save the world...

Or... An officer of the law becomes a fugitive from justice in a race against time to save humanity. A futuristic, present-day survivalist war story.

Joe Branch awakens to find that his world is not quite what it seems, and when called upon to help set things right he embarks on a journey where all is lost before it's begun. His assignment isn't what he's lead to believe, and his teammates aren't who he thinks they are, but his skills, instinct, and a support team he didn't even know he had get him where he needs to be.

I Received a free copy of this audio-book in exchange for a honest review:

I LOVED this book. I was excited from throughout the entire thing. This woulda made a great series. I was disappointed to see there are no other books. But I am excited to see that Steven Bird has other books that look similar. I def plan on reading more from him.

best book from Bird so far!

fantastic book, Mr Bird! The best so far! I'm just sorry I've been carrying it around so long without listening to it.

Great read! After a virus wipes out most of the population,a new order arises.They are The Authority which oversee all things.To get the anti viral that you need daily or weekly...you must obey.After so many years of this,our 'hero' can take no more so he steals packs of the viral and he and a friend escape.They have quite the journey after that! Kevin Pierce was a terrific narrator.I was given this free review copy audiobook at my request and have voluntarily left this review.'

if you are looking for a book where people do the right things for the right reasons, this is it. The author writes stories with strongly principled characters and shows the struggle that doing the right thing can cause in a world full of ambitious and deceitful people with nefarious motives. To me at least, it is a very believable plot in light of the way people are reacting to current events today. You would swear that the author may be able to see into the future.

The first of many books I will read, written by Bird.
It’s a great story that flows and keep you on the edge of your seat!

steven and kevin make a great pair.
such a good story in the troubling times we live in. it's very easy to lose yourself in the story.