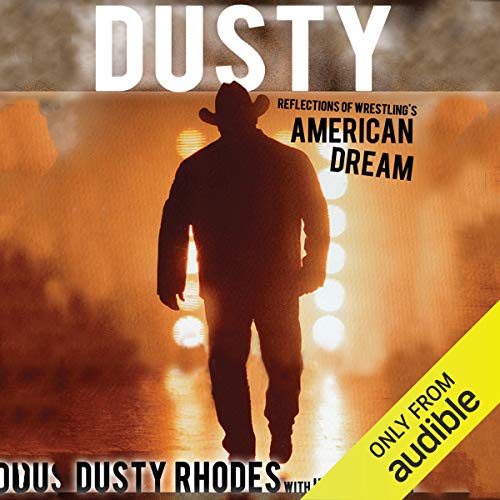 By: Dusty Rhodes,Howard Brody
Narrated by: Kerry Woodrow
Try for £0.00

Virgil Riley Runnels, Jr,. is a wrestler (and former journalist) better known as Dusty Rhodes, "The American Dream". Dusty, written with Howard Brody, is the story of a man whose dreams have come true through a larger-than-life career.

In chatty, expletive-laden prose, Rhodes takes the listener from his first wrestling match to the heights of the sport, and includes accounts of his friendships with other famous wrestlers like Andre the Giant and his rival Ric Flair.

There has been much said about Dusty Rhodes, the 'American Dream', over the years by both his fans and peers. Aside from the frequent fictional prose penned by wrestling magazine journalists and internet smart marks that run rumor-mill websites, however, there has not been much written about him. Until now.

With the exception of a select few, there has been no bigger name or personality in the annals of pro wrestling history than Dusty Rhodes. Of those few, none of them can claim the compelling back story Rhodes shares in Dusty: Reflections of an American Dream of an industry plagued with political loyalties and disloyalties, greedy promoters, manipulative bookers, destructive personalities, multi-millionaires, and great leaders. Behind the "million-dollar smile" and the million dollar gate receipts is a man with a story to tell - not just of tall tales, yarns, and fabrications, but of a life filled with aspirations, dreams, disappointments, challenges, controversies, angst, conflict, success, and reflection.

What listeners say about Dusty

The narrator pronounced many names wrong which took me out the story. Expected much more.

poor narration and pronunciation
story was repetitive and self serving
wouldn't recommend to anyone except a completist. It became irritating and i deleted from my phone

reader should be sacked

I thought I really liked dusty, however the book seemed to be him just saying how much he loved his colleagues with some weird advertisements within...
as for the narrator.. he cant of done any looking into the names he was reading out such as "Eric bitch coff" and Verne ga-gagne worst narrator I have ever heard and would rather listen to a sat nav reading it!!!.
overall I thought the book was the worst wrestling bookings ever read,
must read daniel Bryan's book or jim Ross's now that's a wrestling book done right!!!

stories were great, narrator was awful. get Bruce Prichard to read it in Dustys voice

Some good stories in this book. A little too much background on his time growing up. But overall a good book. However, the narrator is just plain awful. He clearly had no knowledge about the wresting business or the people in it. He mispronounced many names in the book. Really took away from the enjoyment of the book.

What a horrible job

The narrorater ruined this book, he butchered every name he tried to say. Who ever was in charge of the audio version should be ashamed

man I wish the dream read this himself. long live the American dream dusty rhodes

It was an ok bio. Would have liked more in ring stories. The narrator is at times so bad it makes it "good". It made me lol at the various name pronunciations. For example, the guy had at least 3 or 4 different ways to say Jarrett. And let's not forget the classic Bis-ch-off

I liked the stories and the writing style, but the narrator was absolutely awful. Not only did he mispronounce most of the names (e.g. Ted DiBiase [DEE-Be-YAH-See] he says "Ted DeBase." Additionally, he tries to do the voices of the people who are quoted, but shouldn't even bother if he isn't going to sound anything like them (KEVIN SULLIVAN HAS A THICK BOSTON ACCENT. JIM ROSS IS AN OKLAHOMAN WITH BELL'S PALSY. JUST STOP.)
All in all, I enjoyed the stories, but if Kerry Woodrow is featured on other books, I will avoid them like the grating plague his voice made this listen.

Who would you have cast as narrator instead of Kerry Woodrow?

If you are going to narrate a book at least research the subject matter. I know this is not Shakespeare or Austen but for the love of God at least learn how to pronounce the names of the characters.

Story is good, the guy reading it does a horrible job trying to sound like Dusty. If you don’t understand Dusty and his family it is slightly condescending.

Great stories from one of the all time greats in wrestling. The narrator though may be THE WORST of all time. He reads in a fake, overly exaggerated southern accent with mispronunciations galore. He obviously did ZERO research on how to pronounce names, towns, etc. Just GOD AWFUL.

Has to be the worst audio book I’ve ever experienced. The narrstor was the world’s worst, constantly pronouncing names wrong. Some of the most famous names in the wrestling industry. It was a pathetic take on the man’s legacy.

Additionally, production was absolutely horrendous. Constant random cuts and pastes as if it were skipping. Tone changes in the middle of a sentence. At one point, there was a countdown from 10 to 1 and it went 10, 9, 6, 7, 6....... how does that past quality assurance checks?