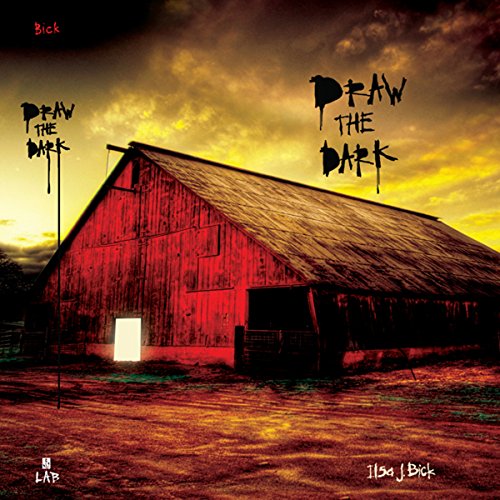 There are things in Winter, Wisconsin, folks just don't talk about. The murder way back in '45 is one. The near-suicide of a first-grade teacher is another. And then there is 17-year old Christian Cage. Christian's parents disappeared when he was a little boy, and ever since he's drawn and painted obsessively, trying desperately to remember his mother.

The problem is Christian doesn't just draw his own memories. He can draw the thoughts of those around him. Confronted with fears and nightmares they'd rather avoid, people have a bad habit of dying. So it's no surprise that Christian isn't exactly popular. What no one expects is for Christian to meet Winter's last surviving Jew and uncover one more thing best forgotten the day the Nazis came to town.

Based on a little-known fact of the United States' involvement in World War II, Draw the Dark is a dark fantasy about reclaiming the forgotten past and the redeeming power of love.

The narrator of Draw the Dark, Joshua Swanson, was handpicked by author and Audible listener Ilsa Bick. Swanson is known for his excellent work on Ship Breaker and the Crystal Doors books.

What listeners say about Draw the Dark

I loved Christian Cage, the first-person protagonist of Draw The Dark. And I adored the narration by Joshua Swanson. Seriously... that guy's got a voice that makes you feel all tingly and warm. I don;t often choose books based upon narrators, but I'll be keeping my eyes open for more books read by him. But anyway, back to the protagonist! The first person narrative really allows the audience to get inside Christian's head. He sees his flaws and puts them under the microscope while Bick's writing allows us to see how many of his flaws are forgiveable sins. That takes some seriously good writing.
The semi-love-interest of the book was the only aspect of the book which irritated me. I couldn't warm to her as she seemed to lack empathy for Christian's plight. She was shallow and irritating. But then... she was a seventeen year old girl. I'm not saying all seventeen year old girls are shallow and irritating. What I'm trying to say is that she wasn't this perfect, smart, beautiful-without-knowing-it, Bella Swan type! She was kind of annoying at times, but she really did seem to want to do the best by Christian.
The premise of the book was one which I didn't think I'd be able to engage with. I'm not really that "in to" the cold case sort of mystery explored in the novel. I am a big fan of the "otherworld" idea. Again, Bick's writing drew me in (...he he he..."drew"...). I was fascinated by Christian's narrative and was honestly gripped by the story.
Some of the psychology discussed in the book made me wonder about Ashes. There's a passage where brainwaves and sleep are discussed and I wondered as I was listening if I might have been listening to the light-bulb moment for that book's creation. I like that sort of inter-connectivity of books, (like the intertextuality of King's work. See, another similarity).
Overall, I loved this book. I'm going to hold back half a star because I can't see any mention of a sequel anywhere and I bloody well want one!

Do a little research

The premise of this book sounded interesting. When I saw that it was set in Wisconsin, not too far from where I live, I decided to get it. The story isn't bad, but I wish the author had checked out a map of Wisconsin. Winter is nowhere near Milwaukee. Not remotely close. It was enough of an error, mentioned several times, to really irritate me. The author shows stretches of promise where one can get lost in the story, but those stretches are punctuated by awkward uncertainty. I wouldn't recommend it.