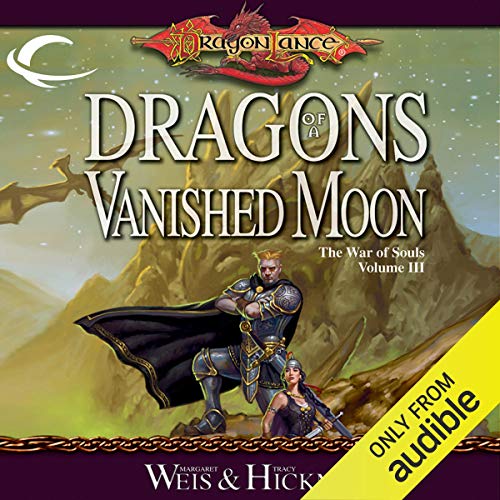 Dragons of a Vanished Moon

By: Margaret Weis,Tracy Hickman
Narrated by: Marieve Herington
Try for £0.00

The flames of war devour Ansalon. The army of dead souls marches toward conquest, led by the mystical warrior Mina, who serves the powerful One God.

A small band of heroes, driven to desperate measures, leads the fight against overwhelming odds.Two unlikely protagonists emerge. One is a dragon overlord who will not easily relinquish her rule. The other is an irrepressible kender who has been on a strange and remarkable journey that will end in startling and unforeseen fashion.

The stirring climax of the War of Souls.

What listeners say about Dragons of a Vanished Moon

My ears. Save my ears.

Horrible narration- Needs to learn to pronounce the characters names not just make them up on the fly. Voice like nails on a chalkboard when portraying Elfs. They’re not chipmunks.

This is book...12? of the main story. I love these books but the constant mispronunciations were incredibly jarring. That being said Herrington is not a bad narrator. Great story, but I suggest reading it. Mixed review I know, but that’s how I felt about it. Mixed.

reaching to tie it all together

this book tries too hard to make everything fit. the new characters are so blah and the personslities of the old characters have all changed drastically . it feels like the first half of book one and the last half of book 3 were written first then everything else is just filler.

What disappointed you about Dragons of a Vanished Moon?

The reading of the text was abysmal.

The character of Mina and her (spoiler) misguided devotion was interesting. The constant overt reminder that (spoiler) the gods had left Krynn was a bit boring.

The reading of the text was abysmal. Constant incorrect pronunciations and simply misread words... examples: liches should be pronounced lih-Chez, but she read it as lik-Es. Another instance the word was immortality, and the narrator read it as immorality, in spite of the context. Finally, the name Majere is pronounced mah-Zheer, but the narrator constantly reads it as ma-Jeer-ey. It's pretty bad.

See my review of Book 1.

I would like to get my money back on this series.

Great Story pulled me past the voice actress

If you could sum up Dragons of a Vanished Moon in three words, what would they be?

The end of another fantastic trilogy by Margret Wise and Tracy Hickman. This book left me wanting to know more about the fate of the peoples of Krynn, as Wise/Hickman usually do. I'm a big fan of Gerard uth Mondar and Odila Windlass. There is a distinct lack of Dwarf in this trilogy that does bug me though. So much elf, so little dwarf. =(

What other book might you compare Dragons of a Vanished Moon to and why?

Chaos Gate of the Deathgate cycle (5th book). This book doesn't feel like the end of the story by any means. It leaves you feeling like events continue, which they do. They continue in the books of other authors which, sadly, don't live up to the legacy of Wise and Hickman.

Who would you have cast as narrator instead of Marieve Herington?

Nick Sullivan (for the male cast)

The finale battle between men and a god.

Marieve Herington isn't a bad Narrator by any means, but she clearly isn't familiar with some of the terminology in the DnD lexicon. Which at times is jarring. Additionally, her portrayal of elves left me feeling a bit ruffled. I've never thought of elves as sounding so much like Santa's little helpers in any of the DnD worlds. Hearing the men as high-pitched, squeaking voiced, waifs bugged me. Particularly when the female elves have lower more stately voices. All in all, I think these books should be given to different voice actors per part. I can't think of a better Mina, Alana, Odila or Laurana, but I'd have loved to hear all of the male parts done a bit more justice, particularly Gilithis and Alana's second in command.

the narrator is AWFUL!

who the heck picked this narrator is crazy...who wants minnie mouse to do the voices of dragons and warriors for crying out loud..she just about ruined my favorite series of all time!

once again a great book, really messed up by bad pronunciations. they really should get someone to coach the readers.

I only suffered this narrator butcher the English language because I currently don't have the time to read. But the story is amazing and when I have time (and I have cooled down from having suffered Marieve) I will read it for myself.

Basically the story is amazing but the narrator was absolutely awful.

great story disappointing ending. frustrating narration, narrator once again made everyone sound like a child.