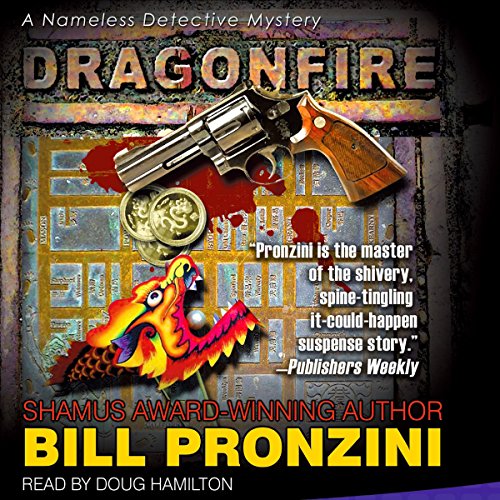 It's a lazy mid-August Sunday afternoon. The nameless detective and his old friend Lieutenant Eberhardt are relaxing on the patio, drinking beer and shooting the breeze, when the doorbell rings. As Eberhardt answers the door, the detective hears two sharp echoing reports - gunshots; they could only be gunshots.

Rushing into the house, Nameless glimpses the bloody body of his friend sprawled on the floor - just before he feels a bullet strike his own chest. While Eberhardt lies in a coma, Nameless is released from the hospital and hits the San Francisco streets, determined to track down the gunman. Facing the toughest case of his career, Nameless doggedly pursues the secret behind his friend's shooting - only to find himself plunged into an action-packed intrigue involving murder, bribery, violence, and the forces of organized crime in San Francisco's Chinatown. The inimitable Nameless Detective, an overweight private eye of Italian descent with a penchant for pulp magazines, is in top form in this gripping, fast-paced tale.

"Pronzini makes people and events so real that you're living those explosive days of terror." (Robert Ludlum)

What listeners say about Dragonfire

Another in an excellent series of short-ish, punchy novels. Mr Pronzini knows how to tell a story with short sentences, noirish similes and descriptions and a well-meaning but vulnerable central character. Women are more weakly portrayed than men, as so often in noir being mostly stereo-type victim or femme fatale etc, and there is the added bonus of the audio books of sounding as though they are addicted to helium - Mr Hamilton also struggles with the Chinese accents a little in this particular novel, though in general his reading is spot on. Very enjoyable, and thankfully in today's fashion for weighty tomes, not too long.