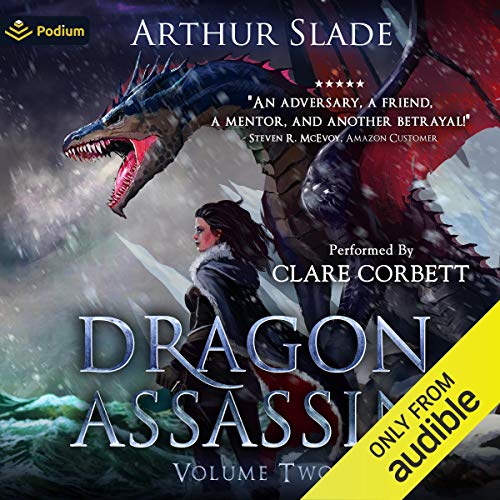 By: Arthur Slade
Narrated by: Clare Corbett
Try for £0.00

Crossing the Bitterwaters is dangerous. Fulfilling her oath is twice as deadly. Will Carmen survive?

She has promised her dragon that she will assassinate a target for him. But he won't name the person or thing he wants her to kill. And he keeps taking her further and further into the deadly land of Drachia, where dragons rule. And, as if that's not enough, every single one of those dragons wants to kill Brax.

Contains the next episodes in the Dragon Assassin series (Bitterwaters, Elder Magic, and Royal Blood.

Feisty Dragon and his Assassin Companion!

This second 2 books 5-6 are even better then the first bundle of books 1-4, and they were great now the wait for the next bundle books 7-8 which are still in the process of being recorded. The Narrator does a superb job with the characters and storyline and is very pleasant to the ear. This author wrote a extremely interesting and Wounderful story that I highly recommend!!

Beat book I have read in years

I can’t wait to read the last two books

This has quickly become one of my favorite series ever. The narrator is outstanding and the book is witty and fun as well as masterfully written. I can’t wait to start the next.

I absolutely love this book series!! I wish they would make the MC a tad smarter…she is smart but misses a lot of easy problems. She does however get it right when it really counts! I hope they continue to strengthen the bond between Karman and Brax in future books!! Only BAD thing in this book is Chapter 57🤨…it is just STRANGE!!! Doesn’t make ANY sense and could have used that chapter to strengthen the ending. Instead of this random jumble of nonsense. Other than that, Amazing read!

Such a frustrating book

I think I've never listened to such a book that would piss me off so badly. The main character has special skills but doesn't know how to use them after being trained her whole life to kill. She can't even kill anyone because she has "morals".....an assassin.....with morals, what the actual heck was the author thinking.

I gave up on this series after trying to give it a shot. Cursing to myself for the main character bring so stupid and weak multiple times was the final straw.

A wonderful story enhanced by an exceptional voice talent. Highly recommend this series to anyone!!

This chapter has a fault in it and repeats a past exert and then continues along, I think you miss a bit of what was said in this little bit.

Another great story. I look forward to reading volume 3 and getting to know the characters a little bit more.

It just keeps getting dumber and dumber?

First of all, the audio had random skipping issues which was odd. Not a problem that showed up in the first book so I'm not sure what went wrong here.

Second of all, the dragons were not dragons in earlier drafts and you cannot change my mind about that. There is no indication that these dragons even needed to be dragons. They act far, far too human and it's a bit annoying.

Third of all, Carmen is the absolute worst assassin in any book I have ever read, and I have read some abysmal assassin books. There's having a heart of gold and then there's just being awful at what you do. Her choices and decisions are god awful. An assassin who doesn't want to kill defenseless opponents is not an assassin.

I'm sticking with this series out of spite. I've come this far. Might as well suffer the pain the rest of the way.

My advice would be to skip this series entirely. If you have come this far and have been frustrated, annoyed, bored, or just generally not entertained at any point (and aren't a spiteful moron like me), it doesn't get better. Back out now.