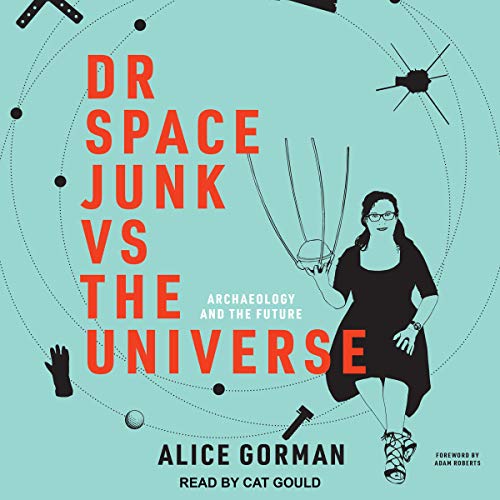 Dr Space Junk vs The Universe

Alice Gorman is a space archaeologist: she examines the artifacts of human encounters with space. These objects, left behind on Earth and in space, can be massive (dead satellites in eternal orbit) or tiny (discarded zip ties around a defunct space antenna). They can be bold (an American flag on the moon) or hopeful (messages from Earth sent into deep space). They raise interesting questions: Why did Elon Musk feel compelled to send a red Tesla into space? What accounts for the multiple rocket-themed playgrounds constructed after the Russians launched Sputnik? Gorman - affectionately known as "Dr Space Junk" - takes listeners on a journey through the solar system and beyond, deploying space artifacts, historical explorations, and even the occasional cocktail recipe in search of the ways that we make space meaningful.

Engaging and erudite, Gorman recounts her background as a (nonspace) archaeologist and how she became interested in space artifacts. She shows us her own piece of space junk: a fragment of the fuel tank insulation from Skylab, the NASA spacecraft that crash landed in Western Australia in 1979. She explains that the conventional view of the space race as "the triumph of the white, male American astronaut" seems inadequate; what really interests her, she says, is how everyday people engage with space.

"A pleasing narration by Cat Gould makes "all systems go" as this audiobook explores archaeology beyond Earth.... Gould's friendly Aussie voice draws one in as the author deftly analyzes each item of space detritus, making this a fun, informative pop-science listen." (AudioFile Magazine)

What listeners say about Dr Space Junk vs The Universe