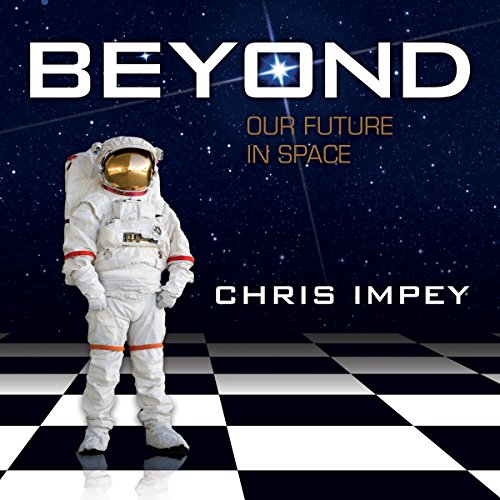 By: Chris Impey
Narrated by: Julie McKay
Try for £0.00

Beyond dares to imagine a fantastic future for humans in space - and then reminds us that we're already there. Human exploration has been an unceasing engine of technological progress, from the first homo sapiens to leave our African cradle to a future in which mankind promises to settle another world. Beyond tells the epic story of humanity leaving home - and how humans will soon thrive in the vast universe beyond the Earth.

A dazzling and propulsive voyage through space and time, Beyond reveals how centuries of space explorers - from the earliest stargazers to today's cutting-edge researchers - all draw inspiration from an innate human emotion: wanderlust. This urge to explore led us to multiply around the globe, and it can be traced in our DNA.

Today, the urge to discover manifests itself in jaw-dropping ways: plans for space elevators poised to replace rockets at a fraction of the cost; experiments in suspending and reanimating life for ultra-long-distance travel; prototypes for solar sails that coast through space on the momentum of microwaves released from the Earth. With these ventures, private companies and entrepreneurs have the potential to outpace NASA as the leaders in a new space race.

Combining expert knowledge of astronomy and avant-garde technology, Chris Impey guides us through the heady possibilities for the next century of exploration. In 20 years, a vibrant commercial space industry will be operating. In 30 years, there will be small but viable colonies on the Moon and Mars. In 50 years, mining technology will have advanced enough to harvest resources from asteroids. In a hundred years, a cohort of humans born off-Earth will come of age without ever visiting humanity's home planet. This is not the stuff of science fiction but rather the logical extension of already available technologies.

What listeners say about Beyond

After listening to Chris David Impey’s book, “Beyond: Our Future in Space”, traveling to other worlds seems distant and practically un-achievable. Impey cleverly begins his story about space travel as though the first human who permanently leaves earth is born in the 21st century. Impey’s novelist beginning is revisited twice, but the true subject of “Beyond: Our Future in Space” is the physics, astronomy, and observational cosmology of the present day.

One presumes Impey’s purpose is to encourage the possibility of reaching the stars but by the end little optimism remains with the listener. The daunting tasks of overcoming gravity, surviving an inhospitable environment, and leaving the only home humans have ever known proffers a gob of pessimism. Some minor relief is offered with a comparison of human migration across the continents in earth’s history but one questions the analogy. With that correlation, Impey speculates that history’s adventurers on earth have something in common with future adventurers in space.

In support of Impey’s speculation: In ancient history, who would have thought human beings would sail for a new world when many thought sailing from land meant you would fall off the edge of earth? Maybe that is where space exploration is today. Impey’s fictional character arrives at an exoplanet with her team. She and her team are at the end and beginning of “Beyond: Our Future in Space”. Now that is optimism.

Good, But a Bit Pedantic

I am a big fan of Chris Impey's work and brilliance, but I was disappointed by the fact that this book is fairly pedantic, with low horizons.

It's pitched as an insider's look at futurist speculation about our prospects for space exploration. In practice, it's more of a TED talk for why we should invest in current space science.

I'm a huge supporter of space science, so I am sympathetic to this impulse, but I'm left wondering who Impey and the publishers imagine as their audience.

For a young student or layperson mostly new to these topics, it's a pretty good survey of the present and near-ish future. However, works of popular science are generally read by well-informed amateurs and professionals from related fields -- i.e., people who are already fairly conversant in the topic.

That's the demographic I fit, and if that is you as well, then most of this book consists of history, science, and technology that you've probably learned about more than once from other sources.

There is also a rather tedious amount of detail on this decade's business leaders in the space industry, which mostly reads like a series of "Who's Who" bios + business plans. That's the section most like a TED talk and most exasperating.

Only the last 3 chapters out of 11 (a bit under 2 hours) really get into speculation about the future. That material was much more interesting, but felt totally inadequate given how long I waited for it.

I certainly don't begrudge a choice to write an "Intro to Space Exploration, Then and Now," but that's not how this book has been portrayed in its promos, NPR interviews, etc -- the focus has almost exclusively been on the "juicy" stuff at the end, which only comprises a couple podcasts worth of material.

Would you listen to another book narrated by Julie McKay?

Additionally, Julie McKay's narration was somewhat exasperating and further reinforced the sense of being subjected to a TED talk.

She is clearly quite skilled and professional so this may just be a discrepancy in my aesthetic, but she read the book with frequent use of two particular intonations that I found frustrating. First, she often adopted a tone of exaggerated wonderment, as if to say, "It might sound crazy today -- but hey, it could happen. You just don't know." Second, she also frequently adopted a chiding tone, as if repeating a cliche scold: "If you fail to plan -- well. That's a plan to fail."

It would be unfair and simplistic to say that's all her narration consisted of, but for me, all the forced profundity eclipsed the otherwise very competent and appealing aspects of her voice and delivery. And that mix of faux wonderment + smug chiding is exactly the kind of patronizing delivery endemic to the delusional nonsense preached by the cult of TED.

That said, this sort of issue may well have been a production / direction choice. I haven't heard other works by McKay, but I wouldn't hesitate to buy one -- I think it was just performative choices specific to this book that I didn't care for.

Do you think Beyond needs a follow-up book? Why or why not?

As for a follow-up book, I see no particular point unless Impey were willing to write an entire book expanding on the futurism of the last few chapters. A popular-science review of the sort of scholarship and speculation being produced by organizations like "100 Year Starship" is what I was really expecting and hoping for. But that's not so much a follow-up as an alternate book.

In summary: Non-essential listening, but recommended for young listeners and newcomers. Recommended with reservations for listeners versed in this topic.

That said, Chris Impey's work is definitely worth exploring in other volumes. I haven't heard other works read by Julie McKay, but I'm certain her other work elsewhere is also excellent and worthwhile.

I felt that the narrator was not the best fit for the book and it’s content. Her intonation and vocal fry would have been a better fit if I was getting relationship advice, rather than the latest thinking on human space travel.

The reader has this strange stilted style that puts all the emphasis in the wrong place. It doesn't actually make any sense, so I never finished listening to the book because it was so distracting.

this is a very well written, relatively short and informative book, the narrator is a very experienced person, her voice sure supplements the excellence of this audiobook.

Superb intro to the wonders of space travel

I found this book to be a mesmerising account of space travel; where we've come from, what's the current situation, and what are the likely horizons ahead. Impey has a beautiful command of the English language and his writing was intellectually and linguistically stimulating. He attempts to be quite comprehensive but his accounts are brief; however, I felt this to be perfectly adequate for someone new to this topic. More than this would have been overwhelming as a start. The choice of narrator was intriguing as I think the initial expectation is that a man would narrate a book like this, so I enjoyed the alternate approach. I have not listened to many female narrators but I felt that Julie McKay did a good job, she has a pleasant voice and narrated with appropriate feeling for a non-fiction book. I highly recommend this to anyone keen to learn more about space and space travel, and I have purchased another Impey book.

Just the right level of technical mixed with a practical and common sense approach. Highly recommend for those looking to contribute to humanity's future in space in some way.