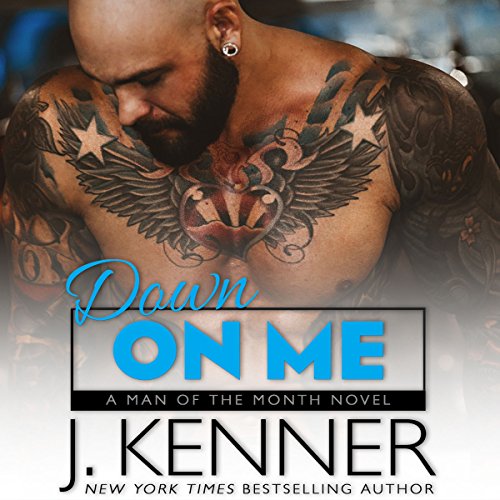 With his tight muscles and vibrant ink, certified bachelor Reece Walker is the kind of man who’s used to having any woman he craves in his bed - except Jenna Montgomery. She’s been his best friend for years, and that’s a line he just can’t cross.

Until a wild, stolen kiss changes everything. Now anything goes, and Reece is determined to use every wicked skill in his sensual repertoire to claim Jenna as his friend, his lover, his everything.

What listeners say about Down on Me

I enjoyed this and Noah Michael Levine was fantastic doing the narration! It was emotional.

Genna, Brent and Reece have been bff since middle school, and have been through many ups and downs together. Genna had moved from Austin, TX to LA for a job but that went kaput so now she's back...and job hunting. Brent and Reece have learned that the owner of the bar where they work, as well as a long time friend, is having financial trouble and may soon have to close the bar. Brent and Reece decide to become a partner in the bar, but they have a short timeframe to drum up enough cash to stave off foreclosure. This is where Gen comes in...her field is marketing. Genna comes up with the idea of 'man of the month' contest. Meanwhile, Reece and Genna finally admit that they have more than platonic feelings for each other and begin dating. Will Reece's childhood influence how far the relationship will go? Will Genna fight for her guy?
Quick story, good narration...now on to the next book in the series.

**uncertain of the spelling of character names**

This 12 book series covers the 12 male calendar models. The calendar was created as a source of marketing revenue for The Fix on Sixth bar. TFo6 loan is due at the end of the year and Tyree can't afford it. Reece, Jenna & Brent join Tyree as partners to save the bar.
Reece Walker (tattooed, shaved head) manages TFo6, his mom left him with his dad when he was 15, 2 stepmoms after his mom left, becomes partners with Tyree-Brent-Jenna at TFo6, had been saving to build a house after he bought a foreclosed plot of land, restored his grandfather's 1972 yellow El Camino & gave it to Jenna. Jenna Montgomery (28; aka Jen) was raised by a single mom, went to school for marketing, moved to L.A. 8 months ago, employer went bankrupt, landlord sold the building where she was living so she returned to Austin. Brent is TFo6 security, an ex-cop, has a 5 year old daughter named Faith, wife Olivia left when Faith was a newborn. Reece, Jenna & Brent have been best friends since the 6th grade. When Jenna returns home she realizes how much she loves Reece. Their relationship quickly escalates to living together, then she finds out she's pregnant, then she leaves him because she wants her baby's father to be her husband. After some soul searching Reece proposed after being a surprise January entry for the bar's calendar.

Epilogue introduces Spencer Dean lurking at the bar planning the construction to be done at TFo6 and that Brooke is his ex-fiancée.

Side characters:
Tyree (aka Ty; black) is a widower (Teiko), son (Elijah) bought The Fix on Sixth (TFo6) 6 years ago, ex-military officer, in the military with Vincent & stayed with his body when he was mortally wounded but is about to lose the bar. Elijah (16; aka Eli; 1/2 black & 1/2 Japanese) is Teiko & Tyree's son, wants to go to med school, interviewing for an internship in a lab at the hospital, and will inherit their house when he's 18. Teiko (Japanese) Tyree's wife, died in a car accident 7 years ago.//Griffin Draper (aka Griff) regular at TFo6, has a podcast, is a writer, right side of his face is scarred.//Cameron (24; aka Cam) bartender at TFo6; sister, Kiki. Kiki won a Grammy.//Michael (18; aka Mike) Reece's cousin, father Vincent died when he was 4 or 3.//Megan (aka Makeup Megan) Reese's one night stand, from L.A.//Tiffany & Alley (TFo6 waitstaff)//Amanda Franklin Jenna's former college roommate; has gone out with Brent & Easton.//Olivia (Brent's ex; Faith's mom)//Nolan (Amanda's stepbrother; works in radio)//Vincent (Mike's dad, Reece's uncle; died is Afghanistan; 15 years younger than Reece's dad)//Easton Wallace (Amanda's former boyfriend; lawyer; has gone out with Jenna a few times)//Eric (TFo6 bartender)//Maia (Jenna's friend; in marketing)//Arlene (Jenna's mom; never married Jenna's dad; married Doug 5 years ago)//Brooke Hamlin (looking for a high end construction project; Spencer's ex-fiancée)//Edie (Charlie's girlfriend)//Charlie Walker (Reece's dad; smoker; married 3×)//Oliver (Edie's grandson)//Doug (Arlene's husband; Jenna's stepdad)//Spencer Dean (Brooke's co-host on a remodel show)//Taylor (grad student Jenna hired to help with the TFo6 event)//Beverly Martin (event emcee; just did an Indie film) JP

Down on Me
Man of the Month, Book 1

I Picked Up This Book Because: Wanted a quick listen.

A great friends to lovers tale.

CAN FRIENDS REALLY BE GOOD LOVERS

Friends for years, one nights events brings it all to a point. Reece finds that he cannot cross that line with the one woman that knows him so well. She could change it all for him, but he was not really ready to make the kind of changes that would make the fiery redhead happy for life. Jenna was not willing to cross that line. She was willing to just lust after the man she has loved.

J. Kenner gave us a good story that shows friends can be lovers and sometimes with time and effort more.

The story was okay but it didn't grab me and keep me interested. The model on the cover is sexy and that is what drew me to get this book!