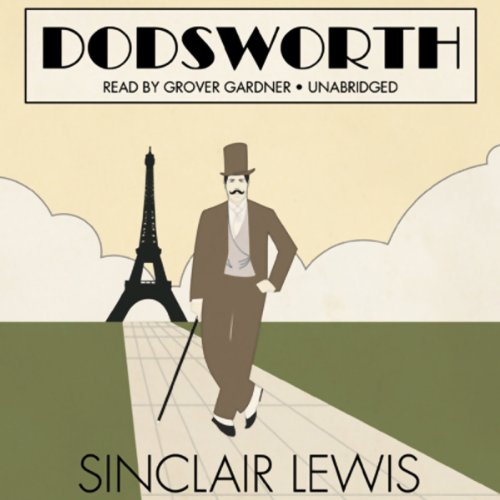 Meet Sam Dodsworth, an amiable 50-year-old millionaire and "American Captain of Industry, believing in the Republican Party, high tariffs, and, so long as they did not annoy him personally, in Prohibition and the Episcopal Church". Dodsworth runs an auto manufacturing firm, but his beautiful wife, Fran, obsessed with the notion that she is growing old, persuades him to sell his interest in the company and take her to Europe. He agrees for the sake of their marriage, but before long, the pretensions of the cosmopolitan scene prove more enticing to Fran than her husband.

Both a devastating, surprisingly contemporary portrait of a marriage falling apart and a grand tour of the Europe of a bygone era, Dodsworth is stamped with Sinclair Lewis' signature satire, which is wickedly observant of America's foibles - and great fun.

What listeners say about Dodsworth

The narrator's voice was a little distracting at first when he read the females dialog. ...but I soon grew accustomed to it.
Once again, the book was far better than the film.

A Very Good Novel About 1920s America and Europe

As an audiobook product, the product is excellent. The narration by Grover Gardner is very professional. I liked the novel, but the subject matter may be more or less interesting to an individual reader as explained below.

"Dodsworth" is a very well written and interesting novel authored by Sinclair Lewis. It is set in America and Europe in the late 1920s. Samuel Dodsworth is a middle age American family man and travels abroad with his wife. There are many characterizations about the differences in American and European Cultures. There are also some "mid life crisis" issues, although that term is not used. As is common of the era, there are numerous references to ethnicity that are now considered offensive.

The novel is really interesting to me. There is a certain time capsule element to the novel as it is both written and set between the two World Wars. Obviously Sinclair Lewis cannot know what is coming in a few years.

I am reading Sinclair Lewis novels in order of publication. Each novel stands on its own. However there are some vestiges of previous novels within this one. As an example is the city of Zenith in the United States.

I liked this novel a lot. I can imagine it not appealing to the taste of every reader. I enjoy Sinclair Lewis novels and read one very several months. Thank You....

A wonderful story that updates the tradition of travel satires about Americans in Europe - but now for the 1920s as only Lewis can describe it.

An American classic of the existential crisis of an expatriate. Should not be essential reading for the college student....but set aside for those changing careers, spouses or retirement. A great companion to Walter Huston’s classic film.

The trip and the book sort of went on too long

Dodsworth started out well. Sam Dodsworth picks Fran for his lifelong sweetheart, marries her, and they live more or less happily together for thirty-something years. Before they married, he promised to one day take her to Europe. After he has built up an automobile manufacturing business and become a millionaire (but not a multi-millionaire), his company is bought out by a larger company, and he opts to retire instead of joining the new company in a subsidiary role. Finally, he can take Fran to Europe. So they set out.

Sam has mixed feelings about his travels. There are scenes and people he enjoys, but Fran spoils much of the trip with her attitude about the people they meet, the service, etc. She seems to mostly want to go where she can be admired and party, and doesn’t at all like the same people as Sam. Eventually they break up, and Sam meets someone more congenial after wandering around alone for a long time. Then Fran’s great romance breaks up, and suddenly she wants to go home with Sam again.

The book, like the tour of Europe, seemed to go on too long, making scenes that ought to have been beautiful dull and tawdry after all the unsatisfactory company.