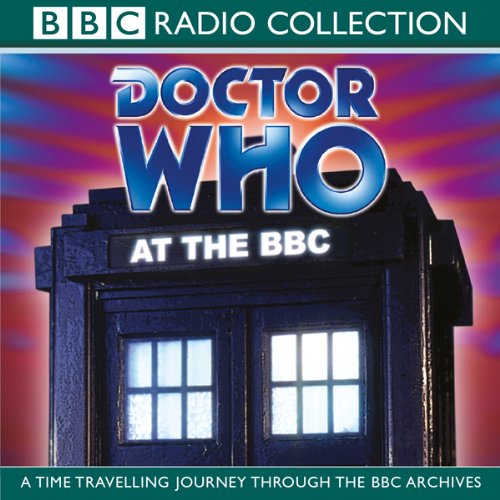 Doctor Who at the BBC, Volume 1

Celebrating the 40th anniversary of Doctor Who, this release looks back through the radio archives and highlights the wide variety of Doctor Who features and interviews which have been broadcast over the years. Dozens of extracts - many of which have been unheard since their first broadcast - illustrate how the programme has been a national institution, held in fond regard by adults and children alike. Amongst those featured are Jon Pertwee, Tom Baker, Terry Nation, K9 and, of course, the Daleks. Also included is a one-hour documentary tracing the series' first thirty years, narrated by Nicholas Courtney.

What listeners say about Doctor Who at the BBC, Volume 1

A wonderful slice of nostalgia and a must for any who nut ..get this now ..if not sooner!
Jon Kolchak Pertwee

First documentary is presented by Nicholas Courtney, (the Brigadier) and includes interviews by early key figures (including Verity Lambert and Terry Nation) in celebration of Thirty Years of Doctor Who (1993). Sound quality is a bit patchy - some interviews sounded like they were conducted by telephone (Frazer Hines). However, it was chock full of interesting anecdotes about the early days of Who.

The Second one is presented by Lis Sladen (Sarah Jane Smith) and celebrates Forty Years of Doctor Who (2003). Includes a bit more on why Doctor Who is so popular and includes interviews with the likes of Douglas Adams, John Pertwee, Tom Baker etc. The last 20 minutes includes two or three short skits – the Doctor phoning Directory Enquiries asking for the Master was quite wonderful.

Both these Radio documentaries were made and aired during the “wilderness years” when Doctor Who was no longer being filmed by the BBC.

As a Who aficionado I really enjoyed this download and it was a treat to hear the presenters, both of which have recently passed away – hence the high rating.

Only for those who need a history lesson

Unlike so many of the recent releases, this is not a new story, or narrated version of one the books or original TV shows, but rather a simple history of the original show from various clips, interviews, TV and Radio events, and segments. Overall, not all that interesting unless you are utterly devoted to the show.
I do have to say that hearing Elisabeth Sladen's voice again was a bit of a jolt, as it was her normal voice, rather than her Sarah Jane Smith character.