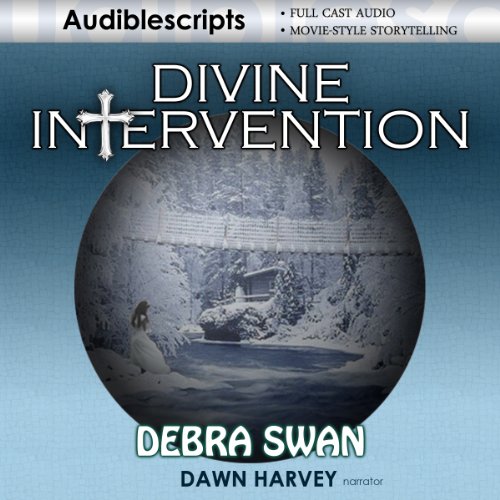 In 19th century New Brunswick - during a time when Catholics where shunned and struggled to survive - Alice, abused and corrupted by her father's bigotry, weaves a web of deceit that eventually affects the whole town. To achieve her ultimate goal of independence from her father, the town Pastor, she must stoop to unthinkable depths even she can't fathom.

Believing the hand of God is guiding her way, and unaware of the events spiraling out of control, she is led down a path of no return, hoping that in the end the man she secretly loves will be at her side. Unbeknownst to Alice he is battling his own demons, not the least of which is choosing between the woman he is obligated to take care of and the one he secretly loves - neither of which is Alice.

What listeners say about Divine Intervention

I finished listening to Divine Intervention by Debra Swan a few days ago and I haven't stopped thinking about this story yet. The story centers on Alice, a pastor's daughter living in 19th century New Brunswick, Canada. She is abused and corrupted by her father's bigotry against Catholics, as are many of his congregation. What Alice wants more than anything is independence from her father and love from the man she works for, Simon, who is the town doctor. However, Simon is interested in another young lady who lives just outside of town. How Alice reacts to this revelation is at the heart of the story.

Although Dawn Harvey is listed as the narrator, this production includes an ensemble cast of actors lending their voices to the characters. Written in a screenplay manner, this story has multiple tragedies packed into two hours. The voice actors did a commendable job reflecting the proper amount of tone and emotion. Several even speak with an Irish brogue as if they were born and raised in Ireland.

Because I keep recalling this story, despite listening to two other audio books since finishing this one, I definitely recommend it. As an added bonus, at the conclusion of the story, there is an interesting interview with the voice actors!

I had a wonderful time listening to this audio book play. The narration was excellent, made me feel like I was there. the characters were very well designed. It was very easy to pick up and hard to put down, I heard it one sitting while doing my daily activities in the morning. I also loved the Q&A at the end. I would recommend it.

I received this audio book in exchange for an honest review

Would you listen to Divine Intervention again? Why?

Definitely. Like any good movie or book, it's always worth a second listen/look to be sure I didn't miss some teeny thing.

What was one of the most memorable moments of Divine Intervention?

Realizing who the killer was!

An enjoyable listen. Liked the crisp narration. Easy to imagine the characters and places. Great drama with a really surprising end.

Please note that I received a free copy of the audio book in exchange for my review. Thank you.

This was really good.In New Brunswick a new church is coming,the old reverends mind is leaving,Alice is caring for her ailing father,the reverend and trying to learn nursing from the town doctor.There is an evil in the town.A twisty,turny good tale! Narration by Fran McClellan, Chris Abrahamsen, Natasha Lisle, Caroline Spencer, Liz Joseph, Scott O'Neill, Dawn Harvey, and Jack de Golia was wonderful! I was given this free review copy audiobook at my request and have voluntarily left this review.'

What made the experience of listening to Divine Intervention the most enjoyable?

The different voices & accents made it more enjoyable for me!

What was one of the most memorable moments of Divine Intervention?

After all everyone had been thru, I liked the happy ending where Simon and Alice are walking down the isle.

Yes, I listened to The Yellow Wallpaper. Dawn Harvey has a nice enjoyable soothing sound to her voice, easy to follow.

I liked the multiple characters in this story which all the different voices. Loved the accents! The accents made this story different from others. The story itself was very good & very surprising. The Father/Reverend was a really mean man! I couldn't believe all the things he did!!!