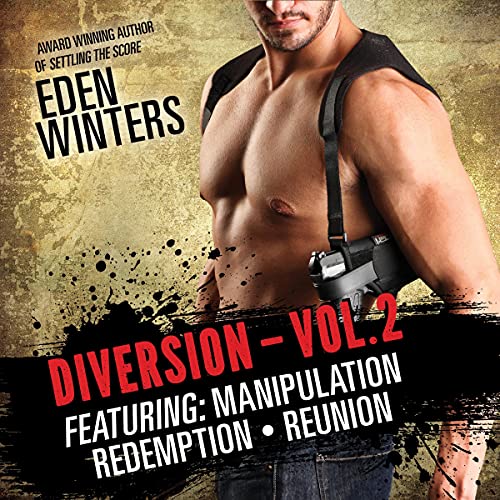 By: Eden Winters
Narrated by: Darcy Stark
Try for £0.00

This audiobook contains volumes four, five, and six of the Diversion series: Manipulation, Redemption, and Reunion.

Lucky Lucklighter has a new life. His old life wants him back.

He traded trafficking for taking down criminals with the Southeastern Narcotics Bureau, and a drug lord lover for a man on the right side of the law. Bo Schollenberger found the way past the thorny defenses of Lucky’s heart, and made Mr. I-Get-Along-Fine-Alone think about him and his closets, stevia in the sugar bowl, and a picket fence - with a good lock on the gate.

Now, Bo is missing, and a voice long silenced asks, “Did you miss me?” Lucky must deal with a devil from his past to get Bo back.

And if Bo isn’t willing to come? A drug ring needs its back broken before flooding the US with a designer high, seductive, and undetectable. But there’s a fine line between good and evil and a truckload of temptation urging Lucky to cross.

Living is the easy part.

Agent Lucky Lucklighter and his partner escaped Mexico alive, only to plunge into bureaucratic fallout from their mission. Hell, maybe Lucky should have stayed south of the border. Especially when the Southeastern Narcotics Bureau places Bo into rehab, and Lucky’s facing both therapy and an inquiry into a fatal shooting. Watching over his shoulder for a vengeful drug lord or a cartel don calling in favors leaves him scarcely able to imagine a future for them as agents, or as a couple.

Bo Schollenberger once had a vision for their life together, but he’s bowed beneath the weight of his undercover work. Lucky’s hanging on by his deeply chewed fingernails, clinging to hope by making Bo’s dreams of a home into reality. The last thing he needs is a phone call from a dangerous man who knows too much, summoning him back to Mexico for “an early Christmas present”.

Not when the SNB brass asks tough questions, like “How well do you know your partner?”

Reunions can be murder.

A dial tone instead of a human voice announced Lucky’s ousting from the Lucklighter clan over 12 years ago. After living a life of crime. After testifying against his drug lord lover. After receiving a 10-year sentence. Ah, hell. Lucky would’ve disowned himself, too.

Now, life’s better. He’s done his time and earned a place in the Southeastern Narcotics Bureau’s Department of Diversion Prevention and Control. He has a house. He has Bo, his partner both on and off the job. And pets. But not his folks. The worst part? He’s not sure exactly why they disowned him. Too late now - they think he’s dead.

Now, his father needs a gift only Lucky can give. And Lucky’s family has something that may destroy all he believes: the truth.

This series follows a hard headed ex-con redneck with attitude and a penchant for pi$$ing people off and his super sunny, nearly perfect sappy on the inside partner. The relationship is set by book 4, but the self doubt and worries eat Lucky up sometimes. The book is told from the outside looking in, and the reader gets a great look at what Lucky is thinking and feeling and how he appears so different to the outside world. We never ‘hear’ Bo’s thoughts, although generally he is the more open of the two. He actually communicates effectively (where Lucky does NOT), something happens to change his personality and ability to speak honestly with Lucky in this set. The stories in this set were seriously emotional because Bo, the happy, upbeat, kind, empathetic one has seriously life altering trauma and Lucky has to put his partner’s needs first. There is also the first time Lucky kills a man in the line of duty, the ex who is supposed to be dead (but maybe isn’t?), they’re trapped, kidnapped, shot, murdered (again), intense and very complicated family drama where somebody loses a liver(sort of, but I don’t want to spoil it for you!) a few great pets, Walter finally giving Lucky a hug- oh! And Lucky actually gets a friend! There is so much personal growth in this box set that although it is painful at times to see their struggles, it is equally as joyous to see the deep love being built. As always, the plots are super solid, with twists and mysteries and unique situations that come out of left field to make your jaw drop. Not a light read, but definitely worth it if you like an intensely series that has an equal amount of action/suspense/law task force/love/emotions. Each book focuses squarely on Lucky and Bo’s life and their undercover work. with the same characters in the spotlight in every book. I tend towards liking male narrators with a deeper voice, but once I got used to Darcy Stark’s voice, and the character voices he portrayed, I really ended up enjoying his narration quite a bit. He does redneck proud! He also does a good job distinguishing Lucky’s thoughts and the words that usually flow out of his mouth immediately afterwards. The way Lucky thinks one thing and speak something completely different to protect himself from the world is a huge part of why I like this book series.