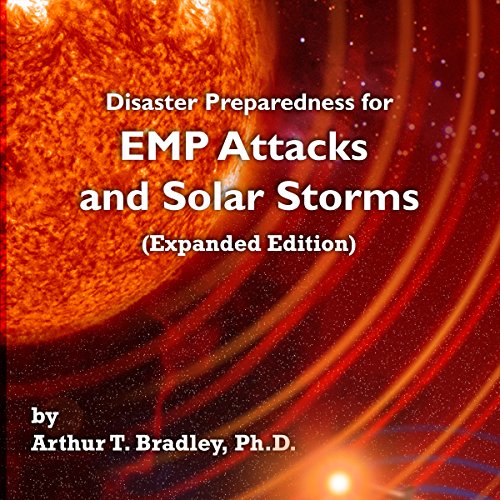 What would happen if terrorists detonated a nuclear device high above the United States? What about if the sun emitted a large coronal mass ejection that resulted in a damaging geomagnetic storm? In either case, electrical power could be lost for months. Shortages would quickly ensue - food, water, and fuel would disappear within days. Widespread panic and suffering would be unavoidable. Are you prepared for these large-scale disasters?

This audiobook will help you to prepare for two the-end-of-the-world-as-we-know-it (TEOTWAWKI) events: the EMP attack and the solar storm. Each threat is carefully studied with analyses of its likelihood and potential impacts on our nation's critical infrastructures. Practical preparations are outlined, including steps to meet the 14 basic needs in the absence of modern utilities, and the use of Faraday cages and uninterruptible power supplies to protect personal electronics. Several techniques for constructing ad-hoc Faraday cages are presented. The shielding effectiveness of homemade Faraday cages is measured and compared, including metal garbage cans, foil-wrapped boxes, fire safes, anti-static bags, ammo cans, microwave ovens, and full-sized protective rooms.

This material would be better in hard copy.

As an avid reader who performs hours of manual labor a day, I try to introduce reading books via Audible. This material (for me) was not easily digestible via Audible on two levels. The first level is formatting. I wanted to listen to the section about building Faraday cages and I listened early to the text tell me that material would be in a certain chapter and because the book is not long, I listened straight through only to discover that the material I wanted was not as expected in the section expected. Upon trying to re-hear the desired section it became clear that "Chapter 7" was the section of importance and that "Chapter 7" held two items seemingly of separate book chapters (unrelated) before it got to the information of interest. Trying to get to that desired section took frustration and time and could have easily been done if this book had meaningful chapter starts and stops. The second reason this book was not good in my opinion is a combination of writing style combined with narration delivery that makes listening diifficult to engage. That same style/delivery has me *outa here." Paraphrasing: this book is boring.

It's worth the listen, but was hoping for more.

I was looking for more usable information about preparing for an EMP event specifically. A lot of time in this book is spent on basic preparedness.