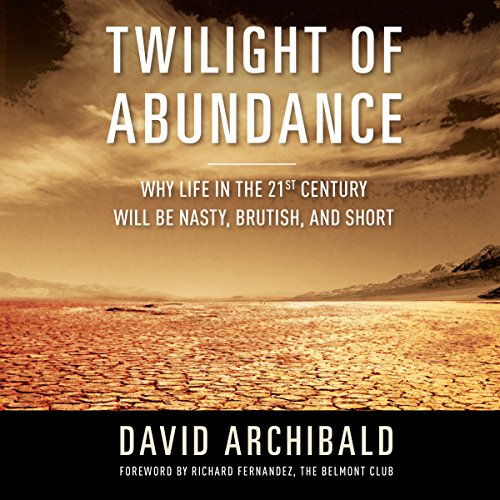 Why Life in the 21st Century Will Be Nasty, Brutish, and Short
By: David Archibald
Narrated by: A.T. Chandler
Length: 6 hrs and 44 mins
Categories: Politics & Social Sciences, Politics & Government
5.0 out of 5 stars 5.0 (2 ratings)

Baby boomers enjoyed the most benign period in human history: 50 years of relative peace, cheap energy, plentiful grain supply, and a warming climate due to the highest solar activity for 8,000 years. The party is over - prepare for the twilight of abundance.

What listeners say about Twilight of Abundance

Q. The most important book you will ever read??

Where does Twilight of Abundance rank among all the audiobooks you’ve listened to so far?

A. I think so. This does not compare to anything else that you will have downloaded. I had already had my epiphany on climate change through other research, which this book proved invaluable in substantiating. Knowledge is power. We must pull our heads out of the sand and beckon in a new age of truth and understanding, or perish in ignorance.

What was one of the most memorable moments of Twilight of Abundance?

Which character – as performed by A.T. Chandler – was your favourite?

Yes, but you'll listen to it repeatedly. Trust me!

John L Casey (former White House Advisor & NASA Scientist) is due to release the audio version of his book 'Dark Winter' on July 26th 2016. Must read!!

This is a MUST LISTEN Audio

What was one of the most memorable moments of Twilight of Abundance?

The future will probably turn out the way David tells it

What does A.T. Chandler bring to the story that you wouldn’t experience if you had only read the book?

This is read in keeping with the author message

This should message should be compulsory

Don't believe that the world is warming anymore

Truth in an easy way to understand.

I see the truth which David Archibald has written about in his book Twilight of Abundance everyday. We all should stop marching in lockstep to MAN MADE GLOBE WARMING NEO-NAZIS

What would have made Twilight of Abundance better?

His fundamental thesis that earth's temperature is controlled by sun activity is rejected by virtually all scientists. He rejects anthropogenic global warming.

Would you ever listen to anything by David Archibald again?

The cold coming down from Canada and destroying American agriculture.

What character would you cut from Twilight of Abundance?

It is nonfiction and doesn't have characters.

He is generally correct about the ecological disaster that we are facing, and I would agree with him on peak oil, but he wrote when prices were rising. The world recession killed demand and, paired with U.S. unconventional shale oil output, drove prices down, so at least for a time his comments on this issue were dated, though I expect the price spiral will return at some point and he will be correct on it at some not far distant future date. But the thesis of a cooling world is so far off as to spoil the book entirely as a work of environmental science. Archibald is regarded as a crank by actual scientists. He holds only a BA, does not publish in peer reviewed journals, holds no academic position, and works mainly in the oil industry, which may explain his bias against the idea that carbon dioxide in the atmosphere from the burning of fossil fuels is heating the planet.