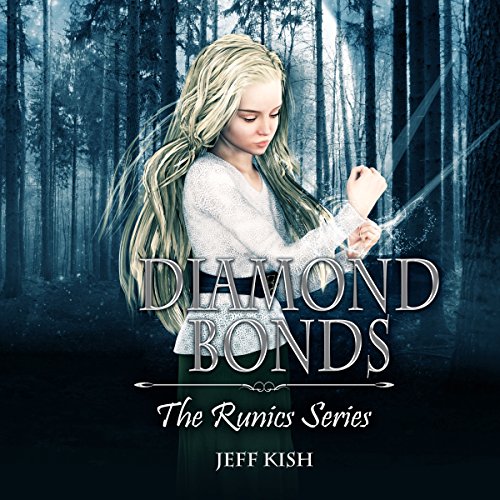 By: Jeff Kish
Narrated by: Aaron Cleveland
Try for £0.00

A kidnapped girl. Nations in conflict. Legends of an ancient kingdom. And one amateur thief finds himself at the center of it all.

Era cares only of surpassing his father's infamy as a master thief - until he stumbles onto a kidnapped girl and promises to return her home. Dreaming of a quick and easy reward, Era and his thieving partner Jem set off to return the girl to her wealthy father. However, when bounty hunters and elemental mercenaries attack to recapture the girl, her claims of ignorance begin to ring hollow. When the girl's own elemental talents are revealed, Era begins to question what else she may be hiding.

As Era fights off foe after foe with his untrained earth shaping skills, the temptation to simply collect the reward on her head sparks an inner conflict between his moral foundation and the future he has always wanted.

In this first book of the Runics series, Jeff Kish delivers fun characters, escalating stakes, and even a hint of romance as this exhilarating novel introduces listeners to the unique and marvelous continent of Castuni.

What listeners say about Diamond Bonds

Would you listen to Diamond Bonds again? Why?

Yes. The story was instantly gripping and fast paced.

What other book might you compare Diamond Bonds to, and why?

I could not compare it to any other book as it is a good book in its own right.

There was a scene at the end of a chapter about 75% of the way through that completely shocked me as I was not expecting it! I will not say any more in case I give anything away.

I struggled with this book from the begining, but I wasn't going to let that deter me from completing it. And I'm happy I didn't toss it aside for another.

Once I got to know the main characters, I cheered them on to complete their missions. It just shows how working together you can achieve your goals.

I think the story ended too abruptly for my taste. Too many open questions that go unanswered. I didn't feel fulfilled at the end. I felt like it was goating me into purchasing the next book in the series. Each book in a series should stand on it's own and invite you to continue reading the next.

I thought the narration was particularly awesome. He was true to form throughout the book using many voices.👍

Great rookie effort! I forgot it was a first book

Would you consider the audio edition of Diamond Bonds to be better than the print version?

For me, yes. I on't have the time to read books, due to a busy schedule, but during business travel listen to them all the time. I am not saying the audio is better, just better for me.

Creative use of gifts that each character had. Good character development.

What does Aaron Cleveland bring to the story that you wouldn’t experience if you just read the book?

Aaron did a great job of capturing the personality of the characters with accents and voice intonation. I was not that fond of the voice chosen for Di, but as the story went on, it blended well.

I never have time to listen to any book in 1 sitting, but the story and acting were compelling for me to return over several days.

Looking forward to book 2. I liked the balance of humor and suspense.

This book was just not my genre.

It just went on and on about Di but did not say who she was til very late in the book.

If you’ve listened to books by Jeff Kish before, how does this one compare?

No I have not listened to a book by Jeff Kish before.

Which character – as performed by Aaron Cleveland – was your favorite?

All of them he did a great job.

Could you see Diamond Bonds being made into a movie or a TV series? Who should the stars be?

Where does Diamond Bonds rank among all the audiobooks you’ve listened to so far?

Diamond Bonds ranks towards the bottom of all audiobook I have listened to. I honestly had I hard time listening to it. The story was okay but he narrator when he did the voice of Di was so annoying. It was awful. Others may like it but I did not.

Would you recommend Diamond Bonds to your friends? Why or why not?

No I would not. I felt that the story was average and the narration was not to my liking.

When the narrator did the voice of Di it was so annoying. It was awful, his characterization of female voices was terrible. I honestly do not like to be critical but it made listening to the audiobook very hard. I only finished it due to my OCD to finish audiobooks and stories.

Get ready for adventure

This review copy audiobook was provided by the author/narrator/publisher free of charge via Audiobook Boom."