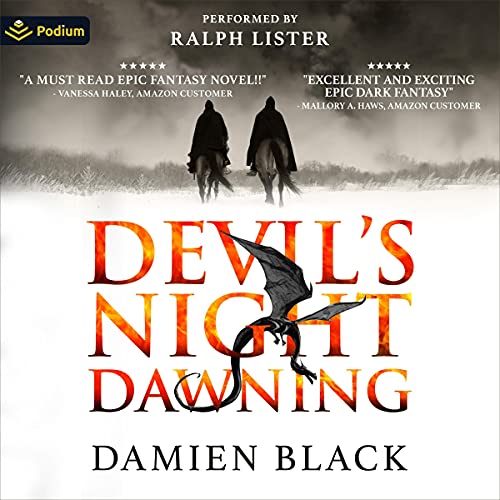 By: Damien Black
Narrated by: Ralph Lister
Try for £0.00

As a kingdom teeters on the brink of war, two witch hunters fight to stop a warlock before he unleashes an ancient evil.

For centuries, the Argolian Order has protected the mortal vale from the dark forces of the Other Side. Now the barrier between worlds is breaking down, and two monks must survive a civil war before they can stop the wizard responsible.

When Adelko is assigned to legendary exorcist and witch hunter Horskram, he expects an adventurous life. Death by adventure isn’t what he had in mind - but it seems the only outcome when they learn of a sorcerous theft that threatens the world.

The thief wants to silence them - permanently. And so, Horskram and Adelko flee from one danger to another as the Jarl of Thule leads a rebel army against the King of Northalde, plunging the realm into conflict.

And on the Other Side, demonkind reawakens....

Not sure about this one

Some of the characters and history seemed totally irrelevant and I couldn't wait for some parts to be finished so I could find out what the three 'main' characters were up to. I almost gave up on this book a couple of times and don't think I will get the sequel although I liked the characters mentioned before.
I get what the author was trying to do in letting you know the background etc but I was bored for a lot of this book.

Sure about this, have given it quite a few hours but really can't listen anymore, don't like the thinly disguised Christianity either, could evole into a really good story though the narrator was annoyin'.

Exciting from the start..knights..wizards..demons..a fantasy with vivid insight to how knights suffered on the battlefield..with wizardry & magic but so much more..this kept me interested to follow all the characters in their quests & Ralph Poster's narrative of the story is second to none!!

i am sorry but the blurb does not desribe this book. it isnt two main characters but 6. he is not grrm. the narrator is dull. and the 30 min plus info dumps at multiple times is just boring. this is a loosley realised post greco magical fantasy bigged up . when it should have been edited and revised down. please only listen to kill time.

I thoroughly enjoyed this book and look forward to jumping straight into the second book!

I'm not a fan of knowing much about a story before I head in so I won't mention much about the story in my review. In brief I found the Christian allusions refreshing in a fantasy and really liked the exorcisim aspects of the story. their are multiple povs and I liked them all. The overall lore and mythos of the world is quite close to many real world cultures and even some names sound sort of familiar but for all that they are their own thing and for the world well.

There's a lot to like in this whole story although it could perhaps do with a little tighter editing. There are a few sections which are a bit info dumpy but to be fair you often don't notice as much because the mythos being told is interesting. There are times where the Pov changes quickly and without much warning and you can find yourself lost if you drift off. Which with audiobooks can happen more easily. Ralph Lister does a faithful job with the story and I had no major issues with his narration at all. he doesn't quite have the range of voices that other narrators have had and this very minor thing lends to occasionally getting lost when the Pov shifts. This is a very minor criticism however.

overall it's worth a punt and really enjoyable I would definitely recommend it.

Nothing spectacular about this one. I started and stopped this book several times during the past two months. There are lots of characters, lots of foolish decisions and plot conveniences. I have listened to other books where you can ignore these items, but this book seemed to drone on. I lost track of the princes, the princesses, the warriors, etc...I suppose some of the blame would fall on the reader...maybe it was a mismatch between the reader and the story.

Can I recommend? Eh. I have listened to worse.

Eventually decided to stop listening at chapter 27 when I had to go back several chapters for the ....th time in an attempt to try and pick up the story line.

A little less than OK

The author had a good idea and I generally liked the dark fantasy tones. However, the story was slow and the author skipped around a great deal when he didn't need to. I was bored.

In terms of "Epics" this is a good tale . Ralph Lister made it great.