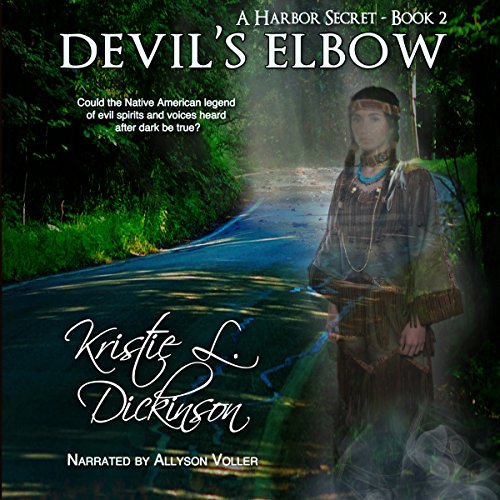 Harbor Springs, an idyllic resort town in northern Michigan, has always drawn visitors. However, hundreds of years before it was known for sailboats, cottages, and fudge, it was known for its hunting, fishing, and tribal conflict.

Kylie Branson thought she was getting a quiet day at the Good Hart Beach with her boyfriend, Jason, and dog, Cupcake, until a fawn ventures down to the water for a drink. When Cupcake takes off after the fawn, Kylie and Jason chase her to the ravine of Devil's Elbow, where they discover what appears to be human remains. Intrigued by the DNA results and the types of bones left behind, Kylie delves into the history of the area and soon uncovers a secret that has been kept for hundreds of years, discovered, and then hidden again. Could the Native American sign at the bend warning of an evil spirit be more than a legend? Could there be a deeper meaning behind the local ghost stories, reported sounds of a drum, voices after dark, and even apparitions? Follow Kylie as she learns about the history behind the treacherous curve in the Tunnel of Trees known as Devil's Elbow.

A wall is layed to old walls.

Devil's Elbow is almost two books spliced into one. Firstly there is a cozy mystery set in the present day, replete with cup cakes and light comedy. Then there is the real story, perhaps to be uncovered, one of the love between a young woman, Little Fawn, and the son of the chief of the Lease, an hunter and a warrior. It is this latter which really grips the reader, simply told but vibrant with emotion, as the distant past is alternated with present day, a device which works well. The mystery, too, is that for the current day protagonists in the story to uncover as much from the past has already been made clear to the reader.

Narrator Allyson Voller reads with a clear, mid tonal voice, her expression following the text. Although not usually overly differentiated, she makes it clear who is saying what at all times. But it is in her relating of the historical parts of the story where she really excels, her performance sensitive and beautiful, pitched perfectly for the characters, and she speaks unfamiliar names with consistent fluency. A fine performance.

Based at least partially on oral history and local legend, the author, Kristie Dickinson, has clearly researched extensively to provide the powerful feeling of it's being true. And, in a brief note afterwards, she mentions that, if Googled, the Devil's Elbow is supposedly the most haunted place in Michigan.

Devil's Elbow is not the book I had thought it would be when I requested it from the rights holder, via Audiobook Boom, and was freely gifted a complimentary copy. It is an unusual book and one I very much enjoyed. I think it would also appeal not only to fans of cozy and paranormal stories but also to all with an interest in Native American life before their world was disrupted.

a very nice book it was a fun ride I liked it very much it was nice and entertaining and very interesting I think the narrator did a good job with the book I liked it
I was given this free review copy audiobook at my request and have voluntarily left this review.

This was an intriguing, historical, legendary and beautifully written and narrated story. I really enjoyed it! I'm a fan of Indian legends & lore, and really thought it was well done. Great characters, great story, great narration. I would definitely recommend it to my family and friends, and anyone who would like to read a great story :) Well done!
I was given this free review copy audiobook at my request and have voluntarily left this review.

Where does Devil's Elbow rank among all the audiobooks you’ve listened to so far?

What was one of the most memorable moments of Devil's Elbow?

When the fatal arrow was let loose

Have you listened to any of Allyson Voller’s other performances before? How does this one compare?

first listen for me

If you could rename Devil's Elbow, what would you call it?

I have no idea

I freely received this audio book from the author/narrator or publisher and am freely offering my unbiased review.

I enjoy how the story flowed from past and present.

Being familiar with the Harbor Springs area, I was especially drawn into the story with the interesting historical and present day perspectives. I found myself caring deeply about the main characters and could not put the book down. I highly recommend this book!

Where does Devil's Elbow rank among all the audiobooks you’ve listened to so far?

I have to admit I wasn't sure if I was going to like it at first, but it soon grabbed me and I now rank it right up there with the best I have heard. It took me into a whole other world, and isn't that what good entertainment is supposed to do?

I felt like I came to know and more importantly care about the characters and my attention was held throughout the story.

I thought the author captured the essence of what Native American life might have been like and I found it very believable and listenable. I know she had a lot of work invested in doing research, and it paid off in my opinion. It kept my interest.

They were people from a different time and culture facing human situations - something everyone can relate to from any generation. Well done.

I thought the battle scenes really painted a picture as did Onadesh accidentally killing Little Fawn with the arrow. Very poignant and it grabbed my attention. I thought the actress who read the story was very well placed also. She did an excellent and effective performance.

I think I already used it in my title for this review. :)

I have read other books by Miss Dickinson and I find her to be an unbelievably talented, diligent and prolific author. Her details and research are evident in all her work, and if I see a title by her I know I won't get cheated on content and entertainment value. The lady does her homework so the reader can escape into the story no matter what it is.

As I saidI really didn't know what to expect from the early chapters of this particular story, but it did win me over shortly thereafter and I really enjoyed it all the way through. In this age of short attention spans that's not easy to do. I commend her well written story line.

I also enjoyed how she tied in the characters from the modern generation (and her first book in the series) so it had continuity for me as a reader and fan. I know how much work goes into a project like this, and I commend Miss Dickinson for not only tackling such an impressive workload but delivering another fresh interesting product.

I'm already waiting for the next one! I know already I won't be disappointed.

I was given a copy of this audio book so that I could listen and then provide an honest review. If you love learning about Native American Lore, you will most likely enjoy this book. The back story provided enough of a mystery to keep my interest. The narrator, however, has a very slow cadence. Sometimes when listening to dialogue, I felt very aware that I was being read to. I did not feel as though the narrator gave me the opportunity to 'feel' the characters. Credit worthy listen.

A bit formulaic and predictable. I could see the potential of this book and just wish it was reached. The present characters were not very interesting. The best part of the book was the Little Fawn indian flashbacks. The flashbacks themselves were somewhat annoying since the present action just didn't flow already. This could have been better with a different narrator, possibly. . I was voluntarily provided this free review copy audiobook by the author, narrator, or publisher.

Two stories being told at the same time

I think I would have enjoyed it more if it was just the Indian story being told with more detail. I don't think it was necessary to bring the more recent story of the discovery into it.

She was ok. I wasn't crazy about her male voice but I'm sure that is difficult to do.

I don't think I would

I was voluntarily provided this free review copy audiobook by the
author, narrator, or publisher.

It's funny how past and present come together some times. This book is absorbing to listen to as the narrator brings the characters to the forefront of this tale. I received a free copy, but voluntarily left a honest review.