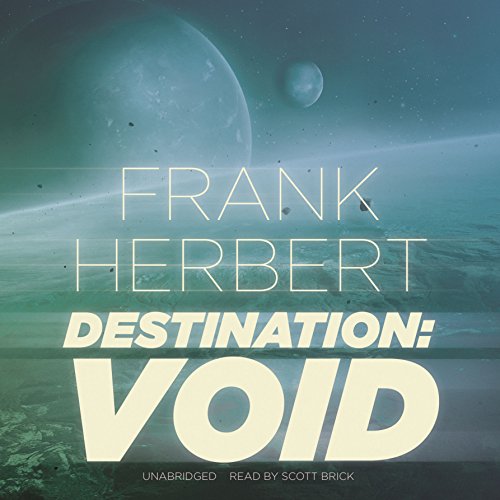 By: Frank Herbert
Narrated by: Scott Brick
Try for £0.00

The starship Earthling, filled with thousands of hibernating colonists en route to a new world at Tau Ceti, is stranded beyond the solar system when the ship's three organic mental cores - disembodied human brains that control the vessel's functions - go insane. The emergency skeleton crew sees only one chance for survival: build an artificial consciousness in the Earthling's primary computer that can guide them to their destination - and hope it doesn't destroy the human race.

What listeners say about Destination: Void

bit trivial and predictable but consider..

when it was written !!
would have been fairly groundbreaking at the time!!

impressive really...
lots of parallels to other works of same authors.

Not the best Herbert

A long, way too long, discourse on artificially created consciousness...I did not buy it. The narrator's voice has a tendency to whine,... Sorry, but I am a disappointed fan of the sci-fi Master.

Decent but not Herbert's best work

As the title says, it was decent but not a scratch on other works by Frank. however it was well read by Scott Brickk as always.

It did not age well

I remember the series from when I was younger and wanted to revisit it.
Started with this one and I am considering dropping it.

The main idea is very interesting but the story itself is so full of quasi-technical mambo-jumbo that I just want to skip to the end.
It's like the pre-80's SciFi movies with everything atomic this and protonic that.

And the narrator is one of the worst parts. He manages to exaggerate the bombastic and presumptuous stile to such a measure that i really had to struggle to finish this book.

Just skip this one and read a summary.

The author explores the nature of consciousness, intelligence, and the consequences of creating an artificial intelligence that is self-aware.

Destination Void's a fairly difficult read and an even tougher "listen." Herbert's writing is dense with techno-babble and conceptual exposition. I had to, at many points, go back several paragraphs and re-read. Listening to the audiobook demanded extreme attention - and even then it was difficult to 'follow' the story in anything but a superficial way.

I cannot recommend the audiobook despite Scott Brick's excellent narration. This is a book that must be read to be understood. If then ...

Wait until the end

Just the last hour of the Audible make it worth the listening, not an easy listen, and this comes from a tech/engineering aficionado. Recommended, though.

At turns intriguing and frustrating

I first heard of this book in a Modern Scholar audiobook on Science Fiction (also available on Audible). I later came across a paperback copy of this book for a long time, but flipping through it I could tell this would be a book I would have a hard time wading through. The audiobook version proved me right!

On the one hand, this book has intriguing concepts about artificial intelligence and the dangers in creating it. The characters are basically forced into a situation in which they have to create a functional AI under duress. The ways they are manipulated, and their efforts to produce a mechanical analog to the human brain using their ship did create many neat and thought-provoking moments.

On the other hand, the book is filled with technical details that went right over my head. Herbert seems to have done quite a bit of work to make this a piece of Hard SF, but the problem is that the kinds of machinery he bases his work on (huge computers with magnetic tape readers, tons of plugs and relays, and a fraction of the computing power of my laptop) make the book quite dated. I'm not a luddite, but I wonder if someone more steeped in the technology of the time would have an easier time following the logic of the character's building process.

Also, the characters at times seem more less like round characters and more like vehicles to have a discussion about AI. Much of the book is spent with them chucking scientific revelations at one another followed by philosophical introspection. It felt too contrived.

Scott Brick's superb narration made this audiobook readable (or listen-able, I guess). It's a difficult text to begin with, but his efforts brought out the drama and its nuances. If he wasn't the narrator on this one I am uncertain as to whether or not I would have downloaded it.

I knew this would be a difficult book going in, and since I plan on listening to the next book in the series, The Jesus Incident (which from the reviews I have read is much more readable for a contemporary audience), I am glad I picked up this one.

I would recommend this book to die-hard Herbert fans looking to branch out from Dune and Hard SF geeks interested in how AI was discussed before the digital revolution. Casual science fiction listeners will be put off by all of the technical discussions of dated technology.

“Theoretical Discussions Regarding the Nature of Consciousness”

…would have been a much more fitting title for this book.

While not uninteresting, and maybe a welcome respite from sci-fi saturated with meaningless action and senseless violence, this may just go a tad bit overboard in the other direction. Imagine the last 30min of 2001 Space Odyssey written out in book form.

The story required continuous suspension of disbelief. Very little of the story was credible. Many times I was tempted to stop, but I went on. Having finished it, I can say I wouldn't have missed anything by stopping.

A very deep and complex book. I found too much of it to technical jargon to enjoy. The story itself is explained very simply in the first chapter of the second book.

Scott Brick's reading was what I found interesting in this book. The way he read chapter after chapter of electrical hook ups and definitions of consciousness.... I applaud his masterful skill.

I wouldn't recommend it to anyone as an introduction to Herbert's writing.

The premise of this book is interesting – maybe even enticing.

Don’t fall for it.

Imagine to listening to someone else’s friends discuss the nature of consciousness and what constitutes true AI…for several hours. It’s fun when you and YOUR friends talk about it, or when actual philosophers and scientists discuss it, but as a pure bystander event? Hardly.

And that’s this book. Everything else, including the entire plot, feels like a postscript.

I got through the entire book on sheer willpower, but now I wish that I hadn’t.

read like a bad 60s scifi but that's ok

the presenters were excellent, just the book pace and tempo read like a 60s scifi. was it good? depends on how you like 60s scifi.
in a world where a spaceship is piloted by thinking computer mind construct. the machines go insane and they need to be replaced from scratch...

Ever Read a Book Three Times in a Week!?!

Frank Herbert wrote wonderfully interesting hard science fiction books..that may sound odd but it’s true. Having listened to this twice in one day (I make art while listening) I just knew there was more that I had missed..so I waited a few days and listened again. Still enjoyed it as much if not more because I had prior info..you won’t regret this listen..