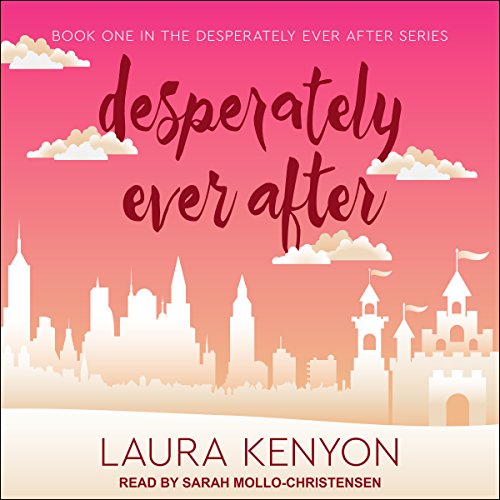 By: Laura Kenyon
Narrated by: Sarah Mollo-Christensen
Try for £0.00

Years after turning her husband from beast back to man and becoming his queen, Belle finds out she's finally going to have a child. But before she can announce the wondrous news, she catches him cheating and watches her "happily ever after" go up in flames. Turning to her friends for the strength to land with grace, she realizes she's not the only one at a crossroads:

Cinderella, a mother of four drowning in royal duties, is facing her 30th birthday and questioning everything she's done (or hasn't) with her life. Rapunzel, a sex-crazed socialite and one-woman powerhouse, is on a self-destructive quest to make up for 20 years locked away in a tower. Penelopea, an outsider with a mother-in-law from hell, is harboring a secret that could ruin everything at any moment.

One part Sex and the City, two parts Desperate Housewives, and three parts Brothers Grimm, Desperately Ever After picks up where the original tales left off - and reimagines them à la Gregory Maguire's Wicked. With the wit of authors like Jennifer Weiner and the vision of ABC's Once Upon a Time, the women of Desperately Ever After rescue each other from life's trials with laughter, wine, and a scandalous new take on happily ever after.

What listeners say about Desperately Ever After

I rely heavily on reviews when choosing a book but there were none so I put on my pioneering attitude and took the plunge. I really wasn’t sure about this one at first but once I got the ‘feel’ of the story then I was hooked. Let the story take your imagination to where you can enjoy this very different genre. It’s fun and a little kooky in parts (well what else could it be?) but never boring.
I’ve now read all three of the series. Don’t try reading book two or three without reading book one.
The narrator did a fabulous job with all the characters although I loved the gossip columnist best.