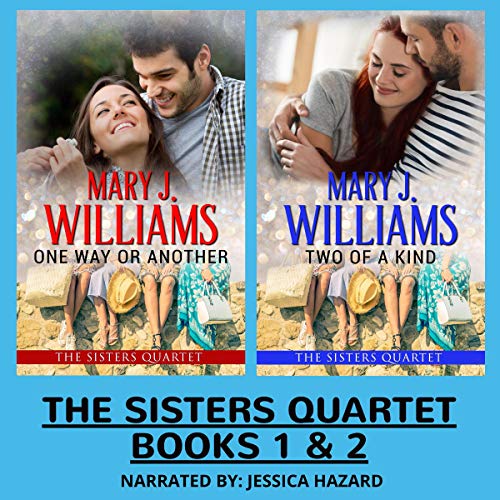 By: Mary J. Williams
Narrated by: Jessica Hazard
Try for £0.00

This special audiobook duet contains books one and two of the best-selling Sisters Quartet series.

One Way or Another

A friends to lovers romance.

He isn’t what she wants. But he’s exactly what she needs.

One Woman. One Man. One unforgettable love story.

Calder Benedict was labeled nothing more than a rich girl with too much time on her hands. Determined to prove the world wrong, she turned a fledgling charity into a successful multi-million dollar organization. Her only goal - to help as many people as humanly possible.

Adam Stone wasn't born rich. Everything he had, he earned. While over the years, he'd acquired a certain amount of polish, his blood would always be working class red - not high society blue like Calder's.

An unlikely duo, they keep running into each other in the most unexpected places. What starts out as a scorching-hot attraction neither can ignore, fun and games quickly turns into something more. Calder wants to believe Adam cares about her - not her money - but she's been burned before. Can she trust her heart? Can she trust Adam?

When a dangerous force comes after everything Calder holds dear, she'll have to decide if Adam is part of the threat, or someone she never thought she'd find - the love of her life.

From the outside, the world of the ultra-rich might seem exciting and glamorous. But the Benedict sisters know the truth. Deception and deceit have followed them since birth.

Their parents are emotional train wrecks. Men care about nothing but their money.

One by one, four sexy, determined men will do their best to prove them wrong.

Two of a Kind

An enemies to lovers romance.

A romance for the ages.

Zach Devlin always got his way. Until he met Bryce Benedict.

Hardheaded. Opinionated. She's everything he doesn't want in a woman. Beautiful. Sexy. Wickedly funny and smart as a whip. She's completely irresistible.

Bryce needs one thing from Zach - to turn her best-selling book into a movie. He's impossible. Arrogant. Frustrating beyond words. And the most exciting man she ever met.

They say opposites attract. But Zach and Bryce are about to find out they have more in common than they realized. More than sizzling chemistry. More than their need for each other. Turns out they just might be "Two of a Kind".

What listeners say about The Sisters Quartet: Books 1 & 2

Definitely part of a series. If read alone, it would be incomplete. I’ve now read all the books, but not in order before. On to the next one.

Loving this series the most so far out of all of Mary's series. I want to be part of this family.