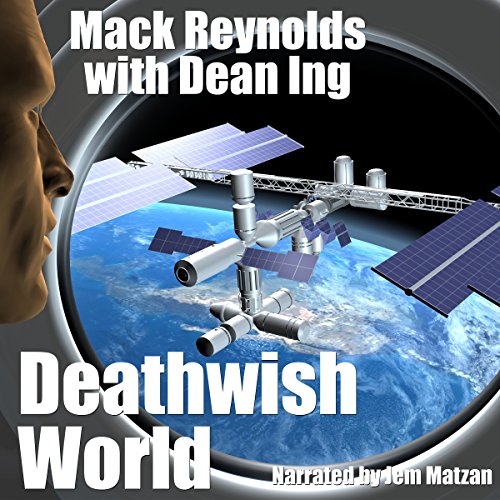 On a future Earth wracked by strife and shortages, Roy Cos buys into a lifetime of ease through the Deathwish Policy, but his privileged status makes him a target for killers hired by the elite Worldgov.

What listeners say about Deathwish World

some interesting ideas but weak

nothing. ia a matter of the story not the narrator

Has Deathwish World put you off other books in this genre?

Who might you have cast as narrator instead of Jem Matzan?

i think ~he did an okay job

a bit of disappointment. it had legs to be a good story

This audiobook was provided by the author, narrator, or publisher at no cost in exchange for an unbiased review courtesy of AudiobookBlast dot com."

I have mixed feelings about this book.

The good: it had an interesting enough story line that was mostly held together well. At times it has brilliant moments of social commentary that make you think, even when you do not agree with the view being presented. At other times it is rather overly done. There were some holes in the plots but they did not detract too much from the overall story. This was likely a product of the multiple story lines, but since I love stories with multiple plot lines that converge, I did not take off points for that. The book takes place in what is supposed to be a possible futuristic point, and to that end it includes some historical info which helps it feel realistic and like a plausible future (if we aren’t already on the way to it now).

The bad: As I mentioned before, there are some points the story tried too hard to get its point across. It was like beating a dead horse. It overly focused on some points, at the expense of leaving others which had plenty of potential unexplored. The worst offense for me however, wasn’t plot wise, it was the constant ‘….he said…..he said…he said.’ It felt like an editor needed to go through and rework some of the sentences so they didn’t all follow the ‘ x-character said “…”, ‘y-character said “…” ' formula on repeat. It may not have grated on my nerves so much in print, but in audio format because the narrator also had a habit of pausing before saying ‘he said,’ it was hard to ignore.

The narrator did a good job with having different and distinct voices for the characters. One or two of the accents left a bit to be desired, but most of them were quite good. In an audiobook with lots of characters it can be really important to keep vocal mannerisms of characters straight. The narrator did a good job of that, especially with the character Horace Hampton. I hadn’t listened to this narrator before, but I would listen to more of his work.

One thing to note: the cover at this review’s writing indicates a space station. While space colonies are mentioned and feature at some point in the book, the story itself takes place on earth.

Overall, the story was interesting and had some nice twists. If you like multiple plot lines like I do, then this will be worth your while. The narration delivered the story well and kept all the important characters straight.

In the year 2086, automation has made the production of food and basic needs so inexpensive, poverty is all but eliminated. Only about 5% of the population needs to work to supply the needs of the rest. The problem is, there aren’t any more jobs for the others. To keep everyone happy(ish), 89% of the industrialized world is on global assistance, or welfare. They have their basic needs easily met, clothes, food, housing, entertainment, and cheap booze, but not much more. The final 1% of the population are so rich they live in extreme luxury and leisure, bored, jaded and racist. They spend their time thinking up ways to smooth out what few obstacles remain to their permanent and absolute control of the world.

A global government is in sight as countries merge. The United States has invited its geographic neighbors to join them: Canada, Mexico, and many countries in South and Central America into a new larger country, now called, United States of the Americas. It works pretty well, except many of the new countries are not so white, and that doesn’t sit well with the all-white ruling class.

Death wish, in the title of the book, refers to an illegal insurance policy on someone’s life. A person (sick of life) agrees to a life insurance policy drawn against him by a foreign agent in exchange for the ability to spend up to one million dollars per day. The goal is to stay alive long enough to enjoy the money while simultaneously avoiding the many assassins hired to end the policy quickly. It is a lottery of extreme wealth measured in days or hours.

It is important to note that Deathwish World was written in 1986. The future described is 100 years in its own future. There are a lot of important societal ideas explored in the book: racism, mass unemployment, crony capitalism, socialism, anarchism, globalism, and wealth inequality. All of this is wrapped up in a satirical Batman/Bruce Wayne kind of vigilantism theme. It is difficult to describe the many sub plots and intrigue without spoiling the plot. Deathwish World is fun, action based, highly entertaining and insightful in unusual ways. The high-tech gadgets thought up in 1986 may sound a little off, but the story does not feel dated, quite the opposite, it seem even more prescient then when it was written.

The story is narrated by Jem Matzan. His performance is quite extraordinary when one considers the variety of characters, genders and accents he must portray in this complex novel. There is an undertone of mischief in his voice that reveals the satirical nature of the story ever so subtly. Each listener may have his or her own biases about how a character should sound, but other than these personal preferences, one would have a difficult time arguing Matzan’s great talent.

This is a unique novel in so many ways, thought provoking, futuristic, satirical, and a warning of what might come. Some of the characters are over the top, Hamp, for example (how can anyone function while drinking that much), but that’s what makes is so fun. Highly recommended.

Would you consider the audio edition of Deathwish World to be better than the print version?

Yes, I would opt for the other edition. Be ready for some dark views of the world.

Expected more science but it turned out ok. It has some very interesting concepts.

Did Jem Matzan do a good job differentiating all the characters? How?

I never got into it. Not sure why, but I found Jem's delivery of this book somewhat less inspiring than of some other books.

Not really. The book was just too dark for my taste.

First and foremost, the cover of this book has nothing to do with the story. The story contains no space stations, or astronauts looking out port windows at space stations.

Nevertheless, it's still a very good story that deals with many contemporary issues, even though the book was written in 1985!

The biggest theme of the book is what happens when our society becomes so automated that 90 percent of the workforce persists on government annual stipends and the government is controlled by the 1 percenters. Like I said, very contemporary issues.

The narrator does a fine job with the various voices and accents he has to deal with (there are a lot of them!) although some of them come off as caricatures of what they're supposed to be. His German access is particularly cartoonish.

Overall a good listen with contemporary themes, well worth the credit!

Would you listen to Deathwish World again? Why?

Did a good job