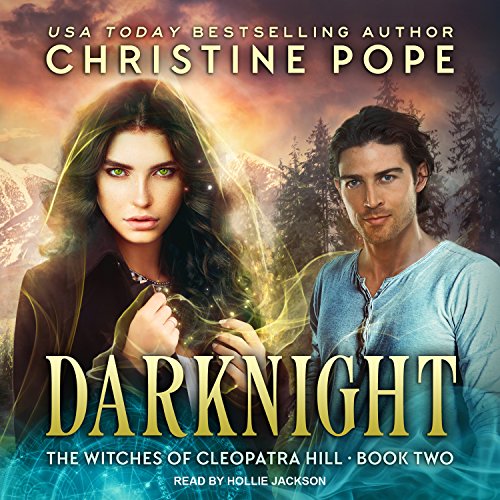 Kidnapped by a rival witch clan, Angela McAllister envisions a dark future for herself until she discovers her captor's brother is the unknown man who has haunted her dreams since she was a child. Forced to re-evaluate everything she's ever known about the Wilcox witches, Angela begins to explore the powerful connection that binds her to Connor Wilcox, despite the generations of hostility between their families and the disapproval of those closest to her. And when a dark, malignant force arises, Angela knows she must draw on her growing powers as prima to protect enemies and allies alike...even if her choice threatens to tear her new and fragile love apart.

What listeners say about Darknight

A pair of passive, milquetoast characters

I read this ebook a while back. Revisiting the story in audio format seems to have magnified the flaws I was able to overlook the first time. This book is saddled with a hero and heroin who allow themselves to be managed by their families, even against their own wellbeing. Perhaps this is a consequence of the insular clan structures of their respective families but I found it difficult to engage with two such passive main characters. Connor demonstrates that he won't risk his own comfort or convenience to protect Angela from his brother and Angela accepts that as reasonable remarkably quickly. When Angela finally grows a spine and makes her own choices she is unreasonably shocked and dismayed to discover that her controlling family will push back. I found myself chastising the characters and couldn't finish the book this time.

Hollie Jackson's narration was good. No issues there.

Love the story except

Narrator only good thing about this book

First book was so good. Then we get to this one where our strong heroine becomes a victim of Stockholm syndrome and completely abandons her family for a man. I get he was her soul mate but she would still throw everything away for him was nauseating. Lets not also mention the huge plot holes.

This book is very preditable and ends up getting boring. I kept forgetting I was hearing a story about someone in her twenties not a teen. It's just not believable and there is no action up to the point I am at which is chapter 7. I don't want to continue with the story, I don't care what happens to the characters and I cannot believe how selfish and idiotic this girl is. She tries only twice to free her self then she is like oh well. Her family does not know what is happening and she never bothers to tell them. After a while all you think is blah blah blah and end up rolling your eyes. I just cannot take any more of the stupidity. I won't continue the series this is a ya tittle if that. Holly as always is good but all the male voices sound the same so that is a little disapointing as well.

Heroine started to annoy me

Spoiler : In Book one Heroine gets kidnapped.

In this book she discovers her long desired consort who was in on the mentioned kidnapping. Because she now is in love everyone ignores the kidnapping and her being held hostage until such time she accepts her consort. It takes her maybe a week. Family also seems lamely unable to do anything about her being kidnapped.

Then she gets annoying. She ignores her family, failing to tell them her shocking news about the Consort or even that she is no longer kidnapped till she suddenly turns up in person with her consort in tow. Family needless to say is not thrilled by her news and she like a spoiled little girl bails on her family and Prima duties after about two days and goes back to the other town she has no responsibility for, ignoring her town and the reason she she gained all that inheritance. Despite the first books talking about her being a Prima this book pays no attention to that or the dark force that freaked her and her town out in book 1.
Then at the end they suddenly focus on the threat and Damon mentioned in the book blurb and suddenly she remembers she is the Prima with sad consequences. Book ends.

OMG! I can't believe he wanted her to go! After everything his family did to her. he even went after girls that looked like her. UGH. I loved​it I couldn't put it down I even got mad at my husband for talking to me lol. I can't wait to listen to the next book..