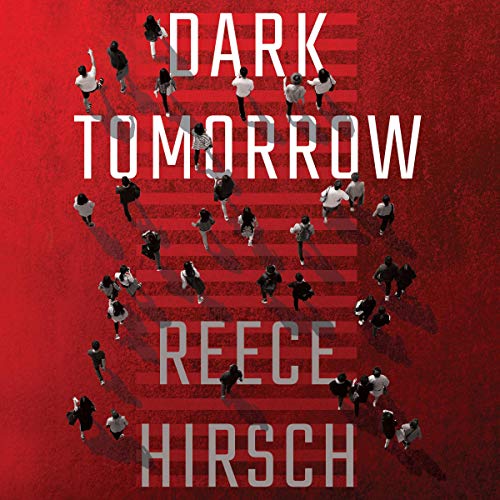 By: Reece Hirsch
Narrated by: Emily Sutton-Smith
Try for £0.00

FBI special agent Lisa Tanchik is skilled at handling cyber threats, having recently taken down a Dark Web black market worth billions. But ruthless hacker NatalyaX always seems to be a step ahead.

The government calls on Tanchik’s expertise when an email attachment causes a fatal seizure at US Cyber Command. But before she can get her feet under her, the entire East Coast goes dark. A sinister plan is unfolding before her eyes - and no one knows who’s behind it.

Tanchik plunges into chaos to hunt down the true source of the attacks. Close dealings with shadowy figures both online and off expose her to extraordinary danger as the country teeters on the brink of catastrophe.

A soldier on the front line of a cyberwar, Tanchik must nullify the threat before it deals a death blow to America’s institutions - and puts millions of lives in jeopardy.

What listeners say about Dark Tomorrow

Dark Tomorrow is the second book in the Lisa Tanchik series. The first book was basically a retelling of the Ross Ulbricht/Silk Road story put to fiction. I very much enjoyed it. These books can easily be listened to as stand alone novels.
Lisa Tanchik is a flawed protagonist. She deals with depression and alcoholism, yet she continues to perform balancing on the edge.
This book is very different from the first. Although the plot is not totally unique in that it deals with the Russians hacking into US computer systems, the actual story is excellent. Tanchik and her nemesis, an American born woman with Russian heritage duel the safety of the US through hacked security. To make matters more interesting there seems to be a mole working in the task force and keeping the Russian saboteur one step ahead.
Emily Sutton Smith is one of the best female narrators. She does an outstanding job narrating this book.
If you have kindle unlimited this book is free to borrow with the kindle edition.
VERY HIGHLY RECOMMENDED.
If you found this review helpful please indicate so.
Thank You.

DARK TOMORROW has everything I could want in a suspense thriller audio book including a great plot, a well developed and likeable protagonist character, edge of my seat suspense, and truly outstanding narration. Give this one a try. Thanks to Audible listener Shelley for recommending this series!

So real and relevant. Epilogue was intriguing and a nice touch. Don’t enjoy hearing so much about Lisa’s alcohol dependence and her depression. But makes her real and not a stereotype. Natalya the antagonist seems too perfect but probably a necessary foil to Lisa.
Narration is a problem when Orlof speaks. Yes it has a Russian accent but the woman’s voice sometimes throws me off!

I loved it. I loved the characters and the story. I can't wait to listen to the next book in the series. The narration was excellent also.

An engaging tale with nice sprinkles of realism.

This was a joy to listen to with a stellar reading. This is a no frills story that doesn't delve into espionage fantasy. Bravo!!!

Dark Tomorrow is the second book in the Lisa Tanchik series, and what a series it’s been so far. Hirsch writes technothrillers that feel like they could happen at any moment and Dark Tomorrow is another one of those books. The first book, Black Nowhere, introduces us to Tanchik and shows exactly what she’s capable of – but also the “black dog” and her depression and alcoholism. All of these things are back in this book and definitely become major plot points at times.

Let me just say that Hirsch does a great job setting the stage for these attacks and spends a lot more time in the field than at the computer. I enjoy both parts of it, but Dark Tomorrow was balls-to-the-wall action with lots of running around and playing catch up. There were a few times that I wasn’t sure how NatalyaX was going to go down or if she would. And there were definitely times that I hoped that Lisa would come out okay.

The overall story in this was really good, a bit different than the first book. Lisa relies on some of her friends in this one, and she gets to play more of a spy/counterspy than in the previous book. We also get to pry her brain wide open and live in there. Seeing just how good she can be when she’s up and how bad it is when she’s down. It was a great book for character building while also not losing the main story.

Overall, Dark Tomorrow was an enjoyable thriller that I couldn’t put down. Lots of action while still keeping the main characters grounded in realism. Not something the books like this can do all the time.

For those of you, like me, that enjoy action and intelligence plots that have a realistic cyber threat component, this one delivers. A modern twist that it’s a female lead and flits between East and West coast pulling in global elements. Hooray that Emily Sutton Smith narrates - she’s fabulous. Hope there’s more books in the series!