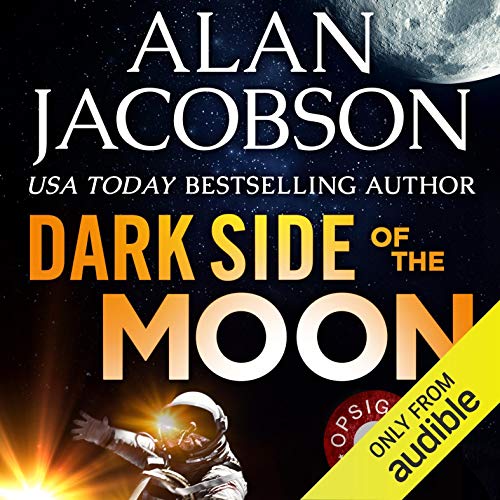 Dark Side of the Moon

By: Alan Jacobson
Narrated by: Paul Christy
Try for £0.00

The OPSIG team must literally leave Earth to save it in this “thriller ride of a lifetime” from the USA Today - best-selling author of The Lost Codex (Gayle Lynds).

In 1972, Apollo 17 returned to Earth with 200 pounds of rock - as well as something far more dangerous than they could have imagined. For decades, the military concealed the crew’s mysterious discovery. But now a NASA contractor has leaked the intel to conspiring foreign powers, putting in their hands the most powerful weapon of mass destruction yet created.

While FBI profiler Karen Vail and OPSIG Team Black colleague Alexandra Rusakov try to root out the NASA mole and break up the spy ring, covert operatives Hector DeSantos and Aaron Uziel prepare for a mission beyond anything they’ve ever attempted - a spaceflight to the moon itself - to avert a war that could not only disrupt the global balance of power, but also end in catastrophic annihilation....

Dark Side of the Moon is the fourth book in the OPSIG Team Black series, but you may enjoy listening to the series in any order.

What listeners say about Dark Side of the Moon