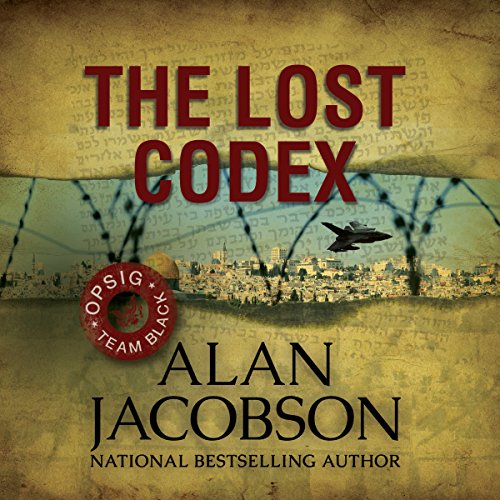 By: Alan Jacobson
Narrated by: Jeff Harding
Try for £0.00

In 930 CE, a revered group of scholars pen the first sanctioned Bible, planting the seed from which other major religions will grow. But in 1953, half the manuscript goes missing while being transported from Syria. Around the same time, in the foothills of the Dead Sea, an ancient scroll is discovered - and promptly stolen. Six decades later, both parchments stand at the heart of a geopolitical battle between foreign governments and radical extremists, threatening the lives of millions.

With the American homeland under siege, the president turns to a team of uniquely trained covert operatives. Their mission: to find the stolen documents and capture - or kill - those responsible for unleashing a coordinated and unprecedented terrorist attack on US soil.

What listeners say about The Lost Codex

Complete waste of time and money

Rarely have I ever come across such a shallow and poorly performed audio book. I really should have abandoned it and asked for a refund.

horrible, remedial and predictable. not worth it

not a good book, predictable and took headlines from the news to make a generic book on terrorism

Barely even about the Codex

What would have made The Lost Codex better?

The book has very little to do with the Codex. It would have been better if he had spent at least 5 of 69 chapters dealing with the Codex instead of a sum total of 2 of 69. It should not be classified as historical fiction because there is so little of it.

What could Alan Jacobson have done to make this a more enjoyable book for you?

He could have named it CIA/FBI/Mossad on a Road Trip. The book was mainly about the interactions and conversations of these 4 people and little or nothing to do with the Aleppo Codex.

Did Jeff Harding do a good job differentiating all the characters? How?

He did. His accents made it easy to differentiate the characters. The book was just so boring. He did the best he could.

If you could play editor, what scene or scenes would you have cut from The Lost Codex?

The detailed description of killing by knife over and over again.

Would love to get my money back.