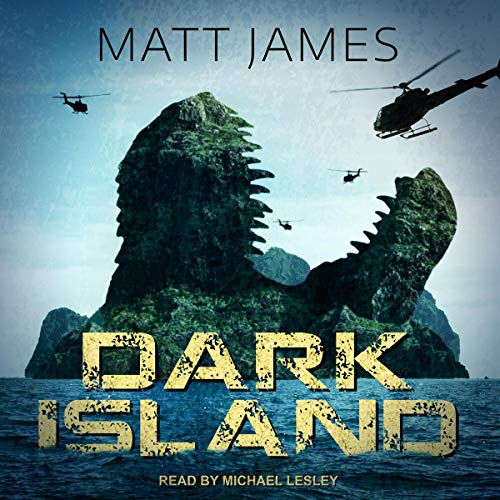 By: Matt James
Narrated by: Michael Lesley
Try for £0.00

Like the "Dark Continent" of Africa, the dark island of Madagascar holds many chilling secrets. One of them is a long-thought extinct species of dinosaurs living at the country's core.

A massive earthquake rocks the mountain range within the Andringitra National Park. The splitting Earth reveals a network of tunnels, hidden away for millennia. Responding to the series of violent upheavals, a pack of hypersensitive predators flee their subterranean home; frenzied and hungry, they head for the surface.

Former Navy SEAL Ian Hunt begrudgingly accepts an offer to lead an exploratory team. What they uncover is the find of a lifetime... if they survive long enough to tell anyone.

Dinosaurs are alive and well at the heart of the dark island.

What listeners say about Dark Island

I feel this story has been told so many times, this is a good book for teenagers who are new to the storyline. The narration was very slow, lots of pauses and I think one was supposed to be an Australian.

I liked the story a lot. I have always been a Jurassic fan. i was on the edge of my seat several times. I loved the characters especially Max. I found the narration a little distracting though

A trend I've noticed with these "lost world" stories is that there is little substance beyond a team of scientists/explorers trekking into unknown territory and getting attacked by virtually everything. There's no sense of adventure or discovery to me, just characters getting eaten before they're developed enough for me to care about them. What'd I'd like to see from a story like this is some time spent on the researchers actually studying the environment. There's a lot of worldbuilding potential with this kind of thing that I think is wasted on overemphasizing action.

I also did not like the audiobook narrator. He tended to read with a lot of awkward mid-sentence pauses and his attempts at the various accents featured in the story were pretty cringy.

I really enjoyed this book. I would listen to a follow up book if it came out

I would not recommend using a credit for this book. I have listened to over 150 books and have never wanted it to end as I did with this title.

loved this book. you can really live yourself into it while listening imagining the moments bit by bit

the reader was horrible.

I could barely listen to the book because the reader was so bad. weird pauses and annoying voice

Please, make this a movie or television series

Loved it. Great book, I hope you have a sequel coming soon. I will purchase the digital/audio as soon as it comes out! I got to find out what happens when Ian and his group go back in.

The book hits the post, but not the target.

Lots of interest in the book, the story was lackluster at best. Such a disappointing story when the story had moments to shine. It was like watching a film that the characters weren't relatable, side characters sucked, and it seemed like a dragon meets Jurassic Park survival story with little character development and iffy action at best. The ending seemed like a failed cliffhanger too.

This book was awful. I have never been so disappointed in a listen/read before. Don’t waste your time.