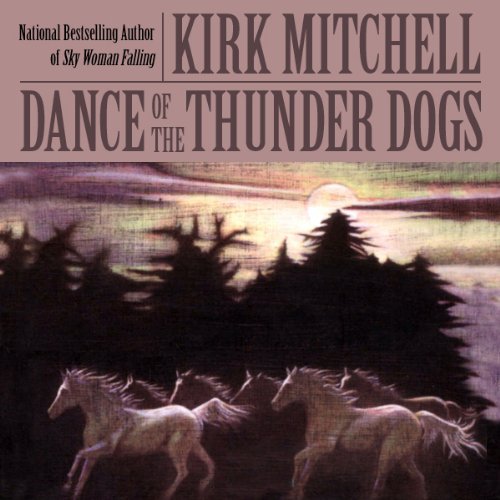 Dance of the Thunder Dogs

By: Kirk Mitchell
Narrated by: Stefan Rudnicki
Try for £0.00

Badly wounded and estranged from his partner and love interest, Anna Turnipseed, Emmett Parker has come home. After 13 years of federal law enforcement assignments that took him to every Indian nation but his own, the veteran investigator for the Bureau of Indian Affairs has finally arrived in Oklahoma on convalescent leave. At once a son of the Nuhmuhnuh ("the People," as the Comanche call themselves) and a government investigator, he has ties to both sides - and is about to discover which side pulls harder.

On the reservation, Emmett finds an intricate web of familial and tribal duties - and what could become a massive class action suit. Indian plaintiffs are suing the BIA for oil well funds they never received. Drawn into the controversy, Emmett is accused of murder by an investigator of his own blood, and now, the man who used to be the law is running from it.

What listeners say about Dance of the Thunder Dogs

This has always been my favorite of the series

Emmett Quanah Parker, BIA investigator, is on his own in this book. He thinks about Anna Turnipseed of the FBI, but she's not playing a part in this one.

Emmett receives an honor dance as a gesture of recognition for his hard work, but it goes downhill steadily from there, as old friends start getting dead and injured. Worse, it's all being set up so that it looks like he's become a crazed killer, gone rogue on the res.

While he's trying to stay ahead of a major manhunt, he also must find the real killer. He revisits old haunts from his childhood and draws support from friends, but it looks more and more hopeless that he'll be able to clear his name.

Meanwhile a native woman is engaged in a shyster royalty check cashing scheme, taking the funds that belong to legitimate recipients, cashing the checks and disappearing with the cash, which goes to her controller. She used to have a husband who participated in this crime with her, but he got on the bad side of the controller and wound up dead in the motorhome bathroom. Now she's desperately following the instructions of the controller while hoping for revenge. She's never met this man who keeps ordering her around and threatening her life...but she'd like to, just once.

The narrator does a decent job with this one. In fact, all of them except "Ancient Enemy" are done by the same narrator, but in that particular book, it just didn't quite work for me. In the other books, it's okay.

Hard to Follow. ..couldn't finish it. Plot poor. The series started out strong and took a nose dive

The book was great until the end. Too confusing of who was doing what and who was who. Pretty long sometimes it got boring.

Is This Really the End?

I binge-read all five books in this series, and am distraught that there aren't any more! After five books, a reader gets pretty attached to the series characters. Hey, Mr. Mitchell, why did you leave us hanging?

Now, the quibbles. First, while Dick Hill is a good voice for certain types of fiction, I found Book Four very disappointing due to his narration. He made Parker sound like a belligerent adolescent, and Turnipseed a whiny girl. I would love to hear this novel re-released with Stefan Rudnicki's interpretations, which fit my mental schema much better.

The way Turnipseed just disappears in Book Five was alarming. She could have been eliminated satisfactorily in Book Two, and a new female siren introduced to torture Parker. Honestly the whole deal about the couple going to counseling when they weren't even engaged or committed was very unrealistic. I've tried dragging three significant others to therapy, and even husbands are generally resistant to the idea. For a hot-blooded Comanche man to turn down every romantic opportunity for over a year just doesn't tilt my reality meter.

Book Five was the least credible of the entire series. I really didn't get on board with first having the U.S. President honoring Parker at the ceremony, and then suddenly Parker is the bad guy? After all his years of heroic sacrifice for the Bureau of Indian Affairs? Some suspicion, gossip, even altercations might have been more convincing, but not the all-out manhunt. Especially when he was not even fully recovered from the serious injuries sustained in his last case (Book Four).

I had the impression that the author was simply bored or tired of his characters. He definitely left them hanging out to dry, so to speak!

I am a Hillerman fan, and studied under First Nations/Native American authors including James Welch and Michael Dorris. Mitchell's plots, with their integration of tribal lore, were compelling. I definitely would have liked to know more. (Banging my head here!)

Thunder dogs, is this the end?

Thunder Dogs was a good book. I gave the story four stars because the author waited until the story was half way through before the character Eli Cusetta was introduced. But then it was his story to tell. Kirk Mitchell is a good storyteller and I enjoy his books.

Best book yet! Wish there were more! Better without Turnip seed!
Stefan Rudnicki was awesome too!

Disappointing to say the least

I really enjoyed the other books but didn't get this - no turnipseed, no chemistry, none of what made the other books so unique and engrossing. Felt like a very unsatisfying and random end to an otherwise enjoyable series

Much of the territory included in this story are old stomping grounds. I am fascinated at the historical relationship between the Native American tribes and peoples. Enjoyed the stories and traditions and legacies that were shared in the story. Very much appreciated the reader, his accents and the way that he presents the material.

great listen, took me a bit to suspect the woman whoseemedto be friends with protagonists, I'll read another of his books