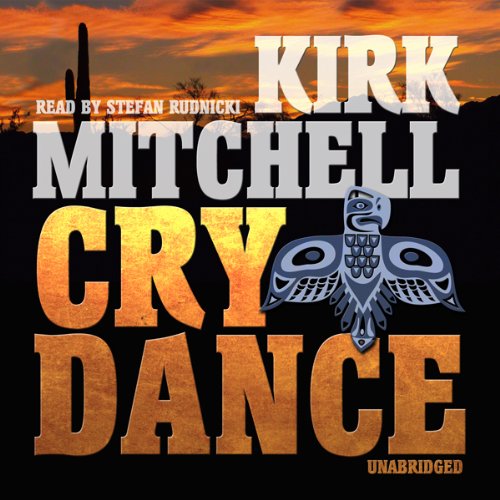 By: Kirk Mitchell
Narrated by: Stefan Rudnicki
Try for £0.00

If there's one thing that Bureau of Indian Affairs Investigator Emmett Quanah Parker knows, it's that the dead don't always stay dead.

When the corpse of a woman, brutally murdered and bizarrely mutilated, is discovered on Havasupai Nation land, Parker is paired with FBI Special Agent Anna Turnipseed in a hastily assembled task force of two. The two share a mixed Native American ancestry - and little else. As they are pulled deeper into a complex case, Parker suspects they are being led, like Custer to a Little Bighorn, into a killer's trap.

What listeners say about Cry Dance

For someone who lives in the area, hearing "Havasupai" and "caliche" mispronounced was tough, but I enjoyed the story and hearing places around me referenced, I could easily visualize the landscape .

I know this part of the country well, and I found the mystery realistic. It has a character driven plot with enough complexity to make it intriguing without slowing down the pace.

Intriguing story. I couldn't stop listening. I had to listen straight through to the end. Stefan Rudnicki is a most excellent voice actor! Thank you.

Author is great! Narration is excellent.

K. Mitchell has the same depth and breadth about his writing as Michael
Connolly, who I hold as a standard for realistic police procedurals. S. Rudnicki
is paired perfectly with this work. Thanks. I'm glad I found this combination!

This first in the Emmett Parker and Anna Turnipseed Mysteries is an edge-of-your-seat ride through Indian territory in pursuit of pure evil. The rookie, Anna paired up with the battle fatigued, Emmett make an odd pair, mixing like oil and water at first, yet as time goes on Emmett is strangely drawn to the young FBI agent. When the faceless body of a young woman is found and the two are assigned to the case, the investigation will take them on a chase for a killer that will pit them both against the forces of pure evil. I really like the American Indian lore in the story, the descriptions of the western landscape and the interaction between Parker and Turnipseed. Excellent story and resolution. I'm looking forward to the next in the series.

Loved the information on Native American beliefs distinct for various tribes. The mystery kept me guessing.

Silence of the Lambs Meets Days of Our Lives

Way too much soap opera drama and the repeated mutilations were just not my thing.

Really enjoyed this story and look forward to more in this series. Interesting characters and storyline and it moved at a good pace.
An inexperienced FBI agent, Anna Turnipseed, is paired with a BIA agent, Emmett Parker, to look into the death of a BLM employee whose body was found on Havasupi land. They are both of native American descent and it is thought that this will help when questioning the locals. They don't seem to get along at first. Anna goes undercover at an Indian casino and encounters some people who seem to be keeping secrets. Several others connected with gambling have been killed and there is quite a range of people getting involved including some Jamaicans, Vegas thugs, other tribes and tribal officials.
Some interesting tribal traditions are discussed. The clues lead them all over the southwest thru some desolate country. It appears as if some people from Emmett's past are involved. The killer is quite brutal in his killings and Anna fears she is on his radar.

Couldn't get too engaged in this one. Characters a bit shallow. Will likely try another.