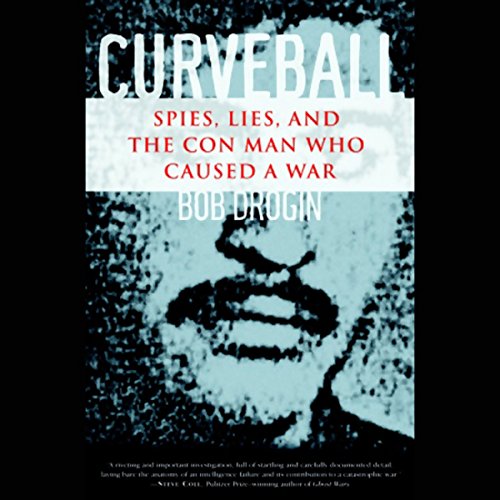 Curveball answers the crucial question of the Iraq war: How and why was America's intelligence so catastrophically wrong? In this dramatic and explosive audiobook, award-winning Los Angeles Times reporter Bob Drogin delivers a narrative that takes us to Europe, the Middle East, and deep inside the CIA to find the truth - the truth about the lies and self-deception that led us into a military and political nightmare.

In 1999 a mysterious Iraqi applies for political asylum in Munich. The young chemical engineer offers compelling testimony of Saddam Hussein's secret program to build weapons of mass destruction. He claims that the dictator has constructed germ factories on trucks, creating a deadly hell on wheels. His grateful German hosts pass his account to their CIA counterparts but deny the Americans access to their superstar informant. The Americans nevertheless give the defector his unforgettable code name: Curveball.

The case lies dormant until after 9/11, when the Bush administration turns its attention to Iraq. Determined to invade, Bush’s people seize on Curveball’s story about mobile germ labs - even though it has begun to unravel. Ignoring a flood of warnings about the informant’s credibility, the CIA allows President Bush to cite Curveball’s unconfirmed claims in a State of the Union speech. Finally, Secretary of State Colin Powell highlights the Iraqi’s “eyewitness” account during his historic address to the UN Security Council. Yet the entire case is based on a fraud. America’s vast intelligence apparatus conjured up demons that did not exist. And the proof was clear before the war.

Most of the events and conversations presented here have not been reported before. The portrayals - from an obdurate president to a bamboozled secretary of state to a bungling CIA director to case handlers conned by their snitch - are vivid and exciting.

Curveball comes across like an investigative spy thriller. Fast-paced and engrossing, it is an inside story of intrigue and incompetence at the highest levels of government. At a time when Americans demand answers, this authoritative audiobook provides them with clarity and conviction.

"Just when you thought the WMD debacle couldn’t get worse, here comes veteran Los Angeles Times national-security correspondent Drogin’s look at just who got the stories going in the first place.... Simultaneously sobering and infuriating - essential reading for those who follow the headlines." (Kirkus Reviews)

"In this engrossing account, Los Angeles Times correspondent Drogin paints an intimate and revealing portrait of the workings and dysfunctions of the intelligence community." (Publishers Weekly)

What made the experience of listening to Curveball the most enjoyable?

Bob Drogin tells the story well - not even letting the 'Good Guys' entirely off the hook! The facts have been meticulously researched and carefully laid out for the reader, layer by layer, so that you see how the dreadful truth became clear to all - even those who blinded themselves to the truth.

Erik read very well - He had clearly studied the material and his pronunciation of the plethora of difficult names was excellent and clear (even to us English!).

... So often the claim by partisans who are more interested in their party than the nation. Mr. Drogin's inimitable research encapsulates the failures that led to the US invasion in Iraq. While the Bush administration is not innocent, Drogin's narrative really clears the air on where the fault should be... the ego-centric culture of the CIA.

Being someone in the know, I'm disgusted by the entire thing, but empathetic to how it happened. I think the community has addressed many of the 9-11 and Iraq war Intelligence errors, but only time will tell.

This account is a non-partisan examination of all the key players. Liberals should read this so they don't sound so stupid and partisan when they try to smear W. Conservatives should read this to realize that W's administration created the culture in which the intel was allowed to fail. In short everyone can learn something from this, if only they get beyond their preconceptions and biases... the very lesson of the book.

Great book... This is one of those books that makes you go "Hummm....." I highly recommend this book to anyone who wants to know the "truth" as this author puts it.

Its amazing to me (maybe not to others) how messed up the whole hunt for WMD's was and how gung ho people in the CIA and other foreign intelligence agencies were.

Interesting read on what could have been an otherwise boring topic. I read it for research purposes to add context to many things that were going on in the intelligence field at the time.

scary what a prideful person can do

amazing book, it is quite te horror story on human pride and inability to accept a mistake and defeat