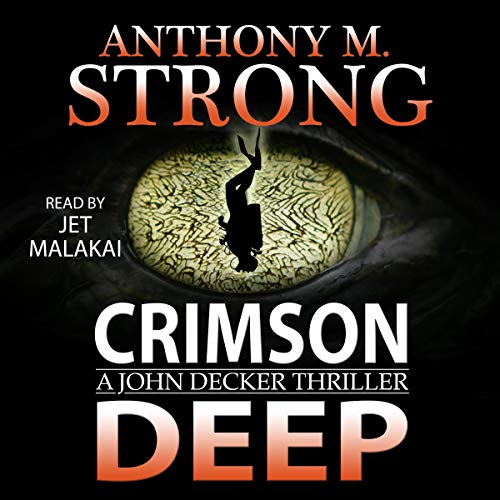 Something ancient has found new prey: us.

Deep in the Florida woodlands, a pair of recreational divers are attacked and killed. Miles away, a research team captures an impossible sight on their remote-operated submersible. Meanwhile, a team of bank robbers speed toward their Florida hideout.

As deaths mount, ex-sheriff John Decker is called from a much-needed vacation by a longtime friend to help a baffled police department track an impossible enemy. Thrust into one of the most dangerous situations of his life, Decker must combat not only a ruthless killer but a cadre of criminals with nothing to lose.

And the stakes could not be higher, because if Decker fails, it could lead not only to his own death but the demise of the woman he loves.

This is book three in the John Decker series, but it can be listened to as a stand-alone novel.

If you are a fan of James Rollins, Douglas Preston, Lincoln Child, and Steve Alten, you will love the John Decker series.

What listeners say about Crimson Deep

John Decker is back

Engaging storyline but the narrator is not the best. Clunky and stilted diction, and terrible pronunciation of standard English words. It's really distracting.

Im a big fan of this author. Thia book works really well as an audio book. The narration is clean and well paced,. This book is a great read and a fantastic listen.
I received a complimentary copy of this book and leave a honest review.

Another decent entry in this monster hunter series

John Decker has a talent for being where any intelligent person should avoid...in the path of some sort of murderous creature that should not exist. But in true lemonade from lemons fashion, he has job offers because of it... and his girlfriend not only encourages his risky behavior, but insists on tagging along.

I think we can tell from that, if not the creatures themselves, that this is well into fantasy territory.

This time it's a VERY large crocodilian menace that seems to be, at least part, dinosaur. This is not much of a spoiler since you meet the critter in the preface.

This time throw in some bank robbers, some scientists who happen to be in the worst possible field test site and an old buddy of Decker's who happens to be the sheriff in the area.


All in all it's pretty far fetched, but still enjoyable. The book is pretty much stand alone, with only a few mentions of the goings on in book one, and only a very brief mention of book two.

I found this enjoyable, if a bit predictable. Worth your time and money I think.

Ta-duh, ta-duh...gave me shivers again like Jaws. John Decker does it again to keep me on the edge of my seat or pacing . He is a HERO