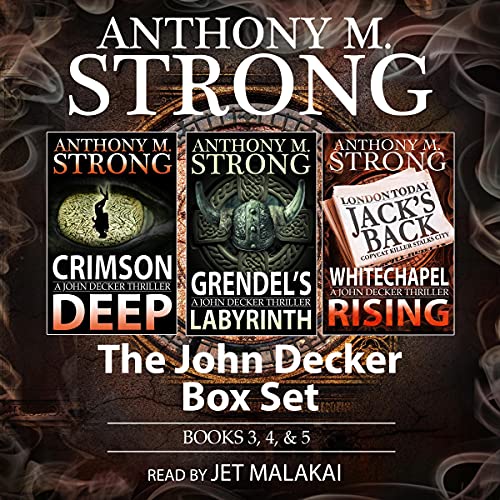 Books Three, Four, and Five in the John Decker series.

Crimson Deep: Deep in the Florida woodlands, a pair of recreational divers are attacked and killed. Miles away, a research team captures an impossible sight on their remote-operated submersible. Meanwhile, a team of bank robbers speed toward their Florida hideout.

As deaths mount, ex-sheriff John Decker is called from a much-needed vacation by a longtime friend, to help a baffled police department track an impossible enemy. Thrust into one of the most dangerous situations of his life, Decker must combat not only a ruthless killer but a cadre of criminals with nothing to lose.

And the stakes could not be higher, because if Decker fails, it could lead not only to his own death but the demise of the woman he loves.

Grendel's Labyrinth: Under a ruined monastery near the quaint village of Clareconnell, a labyrinth of caves hides a dark secret. The remains of Grendel. Defeated by Beowulf and entombed there by the Danes, he has remained hidden for a thousand years, guarded first by warriors, then by monks, and finally by the villagers themselves.

But nothing stays lost forever.

A team of archaeologists is excavating the monastery and searching for his grave. Because Grendel’s bones may hold the key to a medical breakthrough that could change the world.

When John Decker, newly recruited to the shadowy organization called CUSP, arrives in the Emerald Isle to retrieve the bones, he discovers that there’s more to this idyllic village than meets the eye. For Clareconnell has a dark and shameful past, and now that the caves have been opened, the villagers must pay for their sins....

Whitechapel Rising: Jack the Ripper faded into history over a century ago, his identity lost to the ages. Until a work crew restoring a Mayfair home make a shocking find. A secret basement room walled up since Victorian times. The Whitechapel murderer's lair. And inside, a corpse that has waited in silent darkness for over a hundred years. But it won't stay that way....

Within hours of the room's discovery, the body goes missing, and the murders begin anew.

With a violent killer on the loose and the body count rising, John Decker, still new to CUSP, is sent to England, along with seasoned operative Colum O'Shea. Their mission - to stop a ruthless monster from obtaining the one thing that will allow him to escape forever.

As the city huddles in fear and the terror mounts, Decker finds himself in a race against time to catch a hellish fiend smarter than any he has ever faced. Because if he doesn't, the next death might hit a little too close to home.