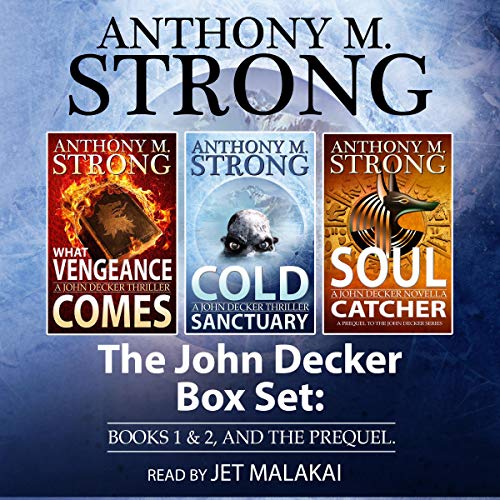 What Vengeance Comes: John Decker left Wolf Haven, Louisiana, to escape the memories of his troubled past, believing he would never return. But after 20 years working for a big-city police department, he suddenly finds himself back in Wolf Haven, taking the reins as the town’s sheriff. Expecting to spend his time dealing with the trivialities of small-town life, he instead finds a vicious killer picking off the residents one by one. Scrambling to find answers before anyone else dies, Decker stumbles across an age-old superstition, a terrifying creature conjured from the depths of hell to seek revenge.

Cold Sanctuary: In a tunnel deep beneath an Alaskan mountain, a man is brutally murdered. Just one in a series of grisly deaths, it is not long before whispers grow that the Qalupalik, a terrifying creature born from centuries of superstition and fear, has come to wreak havoc on the small coastal town of Shackleton, Alaska. With no way to stop the slayings, the town turns to disgraced ex-cop John Decker, hoping he can do what they could not. The assignment, far from his native Louisiana, might be just what Decker needs to put the past behind him. But as the bodies mount, and the town grows frantic, Decker realizes that whatever is on the loose is no mere superstition. The bogeyman is real, and it's up to him to stop it.

Soul Catcher: In New York City, Homicide Detective John Decker arrives at a brutal crime scene. A man has been tortured and murdered in his own house, a sprawling mansion on the Upper East Side. But this is no ordinary home invasion. Nothing has been taken, and there appears to be no motive. Until beautiful Egyptologist Emma Wilson shows up with an enigmatic letter penned by the victim. Soon Decker is thrust into a shadowy world of ancient beliefs, fanatical cults, and the quest for a priceless artifact - a rare statue of the Egyptian god Anubis. Now, with their lives in grave danger, Decker and Emma must solve the mystery of the statue, and stay one step ahead of a cult with one thing on their minds, the return of their god, and the judgment of all mankind.

What listeners say about The John Decker Box Set: Books 1 & 2, and the Prequel.

I love his character, John Decker. A real goody. Looking forward to the rest of his books

This box set is for books 1, 2, and the prequel to a supernatural thriller series of books. My husband and I listened to them, and we both loved all the stories. I'd be hard-pressed to choose a favorite from them as they were all so different. I'm hooked and am looking forward to listening to the next one!
I also thought the narrator was great. He has a nice, deep voice and does a good job with the characters. I hope he is used over the entire series.
All in all, I'd recommend this to anyone who loves action, mystery, and thriller-type books, and if you also love paranormal or supernatural elements, then you will love this author. Good, complete storylines, well thought out, and exciting. Reminds me of Preston & Child mixed with James Rollins.

Back to back thrills and chills!

What a great deal! A John Decker starter pack! If you are looking for a new series to to get into and you like action and suspense with a monster thrown in for good measure then look no further! I have read all of the books in the John Decker series and they are among my favorites. If you like supernatural horror then this series will NOT disappoint! Having the prequel to set the stage and the first two Decker adventures to start will keep you hooked from the start! My only complaint is that the narrator can't pull off a southern accent and with one of the books set in Louisiana his attempt was rather grating to the ears of a native of the south. All in all it was a great listen! I can't recommend it high enough!