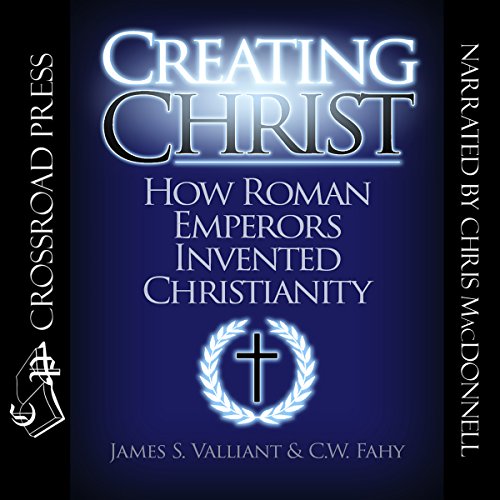 This explosive work of history unearths clues that finally demonstrate the truth about one of the world's great religions: that it was born out of the conflict between the Romans and messianic Jews who fought a bitter war with each other during the first century. The Romans employed a tactic they routinely used to conquer and absorb other nations: they grafted their imperial rule onto the religion of the conquered. After 30 years of research, authors James S. Valliant and C.W. Fahy present irrefutable archaeological and textual evidence that proves Christianity was created by Roman Caesars in this book that breaks new ground in Christian scholarship and is destined to change the way the world looks at ancient religions forever.

Inherited from a long-past era of tyranny, war and deliberate religious fraud, could Christianity have been created for an entirely different purpose than we have been lead to believe? Praised by scholars like Dead Sea Scrolls translator Robert Eisenman (James the Brother of Jesus), this exhaustive synthesis of historical detective work integrates all of the ancient sources about the earliest Christians and reveals new archaeological evidence for the first time. And, despite the fable presented in current best sellers like Bill O'Reilly's Killing Jesus, the evidence presented in Creating Christ is irrefutable: Christianity was invented by Roman Emperors.

What listeners say about Creating Christ

I thoroughly enjoyed this book was brilliantly read very highly recommended it’s now in my top ten books 10 stars if I could, I’ll happily listen to it again in a few weeks. The writers are looking at the early writings and archeological evidence and give the most likely plausible methods of how the Romans were very much involved with early fabrications and massaging of history of creating the Christ, I found it wasn’t too scholarly and so interesting I really couldn’t put it down

Gave up after an hour of droning

The presenter voice is hard to listen to for any length of time. The book is very academic for those research such matters. Not agreeable for true spirit filled believers of Jesus (Yeshua) as the Messiah. At least the first hour isn't - then had to stop listening.

Surely The Truth will set you free.

Objectivity and a careful consideration does not begin to describe this book. The astounding conclusions are so obvious, in retrospect, and so unknown in common parlance, that one can see their daily effect on world events but before reading this they are invisible. This is great literature of the highest intellectual tradition, a solid integration that makes new discovery possible whilst carefully considering ALL the facts.

Where does Creating Christ rank among all the audiobooks you’ve listened to so far?

Finally, there is a well reasoned, meticulously researched & presented, historically accurate explanation for the birth of Christianity.The authors are able to set the historical context with copious annotating, and make their case after having each done 30 years of research. It is an important work.

It comes with high-quality pdf with all the images and notes.
The reader is perfect in all respects: pace, pronunciation, tone, inflection, etc.

life is one big lie

Great book, great narrator , a must read. All these dam lies we been taught, you have to go and re-educate yourself.

Many times, when dealing with unpopular, or not widely-accepted ideas, authors become shrill and somewhat hysterical in their defense of their ideas against attack. This book is not like that. The authors maintain a balanced, scholarly approach throughout, and only occasionally launch criticisms against the pushback to the theory. Instead there is a refreshing adherence to the plain evidence, which is overwhelming and convincing on its own. Excellent work.

Great book. Wonderful scholarship. Absolutely one of the most important works to come out in the last decade. Hopefully this, along with Irving Finkle's book on the flood and the translation of the Cananite Ugaritic tablets we finally have a complete inoculation against the barbarism of Abrahamic religion. My only real complaint is the atheist diatribe at the end of the last chapter. That wasn't necessity. Just because Christianity is false doesn't mean all religions are automatically false too. There are other ways to have a religion that don't require lying about history.

A scholarly analysis of Judeo Christian and Roman history

Analyzing the fragmented bits of history that have been destroyed, hidden, re-written, and obfuscated over thousands of years is a daunting task for anyone, and this book discusses the convoluted aspects of this in a scholarly manner. The most profoundly honest look at religious history I have yet to find.

Couldn't stop reading/listening. It's fascinating to consider how Christianity came to be. We all know the religions are a creation of man, but rarely do we get to understand how and why they were created.

What a different look at Christianity. A look that makes the most sence thats has ever been put forth. It makes perfect sence and will really get you thinking.

This book is a really good theory about the origins of early Christianity. I begin to wonder if the author is right or wrong. Well written book!