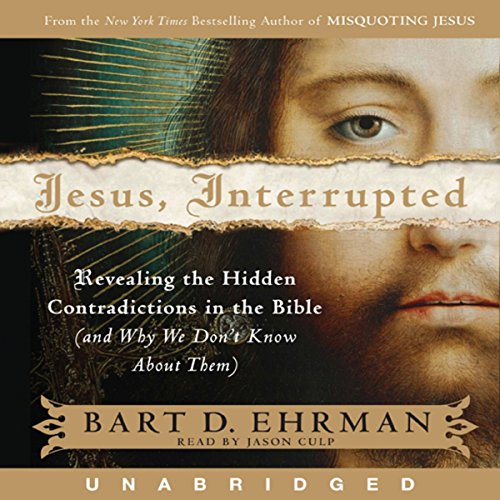 What listeners say about Jesus, Interrupted

Should be a "must listen to" for every adult!

I always feel like an uninformed idiot after reading Bart Ehrman. Yet I am an educated, open minded and well traveled adult. I guess I am almost angry that I've allowed myself to be so easily brainwashed... His easy to read style and depth of information never disappoints.
While listening with my headsets on my partner had to deal with sudden explosions of "What!", laughter and slaps to the forehead. It just gets to you that strongly.
If you are at all worried about it damaging your faith then listen to the last chapter first. It certainly won't unless you want it to!
The reader is perfect. A great voice that one never tires of. I fear if I ever got to meet Mr. Ehrman I'd be shocked to hear his voice!
Now that my 15 hours are over I must immediately download another!

An interesting perspective on an old story

Erhman is a man of great intellect, a scholar of the highest credentials.

The contents if this book he claims not to be controversial among academics in the field of biblical scholarship, but are certainly controversial to the layman.

His conclusions are certainly controversial - but given the weight if evidence he gives in support they clearly shouldn't be.

A good run-through the work of New Testament history; detailed enough to provide clarity but not in-depth enough for me in some places.

A book that will make you think, maybe not fought to shake the faith of the masses but it will certainly leave you with many questions.

A good audiobook but for me it would have been much better if read by the author.

Phew! Should be read in every church

Hard to argue with Prof. Ehrman's reasoned and carefully presented scholarship. Beautifully clear; a shame that the deeply indoctrinated won't ever appreciate or even consider the questions raised by this

Sanity with good humour and honesty.

Sanity at last!!! I have been trying to join up these dots for years, in ministry and for my own quest, and here is a scholarly and sensible account of all the issues that stand in the way of swallowing all these impossibilities ‘before breakfast’. Clearly set out and without the arrogance of a Dawkins. Reading is perfect.

Casts aside arguments that Jesus is a myth with a bizarre anecdote about a story that appears in the new York times. He has no explanation for the silence of Paul. Bart ehrman is a scholar but not when it comes to this.

An informative journey through the happenings of early Christianity with great examples and anecdotes.

Lucid Exposition of Evolution of Christianity

l loved this book and listened to it in record time. Like most other Erhman's books, it's well explained to the ordinary lay audience. The people in the pews can at last appreciate the beginnings of their Christian faith and how it evolved over centuries. Illuminating.

So this book is about the Bible not really just about Jesus. Professor Ehrman does I think play up the "contradictions" in the Bible - for example when he goes into how no two copies of the New Testament agree he cites horrifying statistics for how many discrepencies there are in the manuscripts before admitting most of these are due to spelling differences because there was no standardised spelling at the time.

I do think it is more informative to read the Bible "critically" - that for example the author of a book might actually be an editor who had various manuscripts and oral sources they were trying to weave together into a single whole and sometimes the different sources don't quite fit together and we need to recognise that.

It is also useful to acknowledge that there are differences in the various manuscripts and since we don't have the originals it is quite possible that the manuscripts we do have themselves contain similar differences from the originals, however if you read and understand a Bible book, you can decide for yourself if it sounds coherent or not, and one option if things don't always make sense is that there was some corruption of the text, so it is up to you to decide what the author was most likely trying to say.

So I found this a useful and informative book but Ehrman can be a bit of a showman in trying to "shock" us into what he wants to say are some sensational discrepancies but what are actually quite sensible points that help us to understand the text better.

This book has helped me in understanding why there are many contradictions in the 'good book'.

Excellent content and narration. Very enlightening and informative. As with all of Prof. Ehrmans books and lectures, could not stop listening.

As a Christian believer (albeit open minded) I found this book fascinating. It certainly has caused me to look differently and more deeply and the new testament gospels that we all tend to accept blindly. It has actually deepened (not threatened) my faith. Thank you Prof. Ehrman, I only wish I had taken your classes while at UNC.

The book was very enjoyable: a nice account of the New Testament from an historical perspective.
My complaint is that the book is only 6 hours. It is listed as 12 hours and divided into two parts. If you download both parts, you just downloaded the same book twice. It's a good listen, just limit your expectations to 6 hours (not 12 hours!).

This is the most approachable critical historical look at Jesus and the New Testament that I've yet read. This book should be mandatory reading for everyone, both believers and non-believers, who holds a strong opinion regarding Christianity. It certainly won't turn a non-believer into a believer. It's unlikely to turn a believer into a non-believer. But it is likely to make both sides take less extreme stances regarding the role of Christianity (especially those of the American Evangelical persuasion) in todays society.

Take a college course in New Testament in a book

I teach "Introduction to the New Testament" in a Public University in North Carolina. This is without a doubt the best introduction to the New Testament that is currently available. The book is accessible but always scholarly. I assume Ehrman has taken his notes from his New Testament class and expanded them into a book, because this is precisely the material one would get in a New Testament class at a University. Evangelicals will find the material challenging, but Ehrman (a former evangelical himself) works hard to show the evidence and answer the objections he knows are coming. I cannot say enough good about this book. Buy it, listen to it, and your understanding of the New Testament will be enhance and possible transformed.

A Seminary in a Book

An incredible book that will let you see what is taught in mainline Seminaries and Divinity schools throughout the western world... much of it you'll probably never learn about in church, even though your pastor knows many of these facts... It's like a seminary in a book and will add a whole new dimension to your reading of the most significant book in the western world. It teaches a critical historic review of the New Testament rather then what most people know which is just a devotional read of the Bible. I first listened to on audible and like it so well bought a couple copies here for me and other more progressive friends.

This book seems to fit in between 'Misquoting Jesus' and 'God's Problem'. I didn't find it as intellectually satisfying as 'Misquoting Jesus' and I didn't find it as doctrinally challenging as 'God's Problem'. While I appreciate Ehrman's desire to translate Biblical scholarship for the lay reader, 'Jesus, Interrupted' just seemed over-organized but also underwrought. At his best Ehrman is engaging and challenging. At his worst, Ehrman's prose jumps between pedantic and overly simplistic. His central premise on the need to read the Bible from a historical perspective and not just a doctrinal perspective already had significant purchase in me, so perhaps, I was just hoping 'Jesus, Interrupted' would wow me just a little more.

Less academic than Misquoting Jesus, therefore more listenable, this is another Bart D. Ehrman look into the early Christian Faith/Jesus Movement. I learned nothing about the bible from Christian evangelical radio, so I am glad to get another audiobook that is very well informed.
If you want to learn about early Christianity without the proselytizing this book presents an explanation/examination of the famed discrepancies of the gospels; very intriguing.

Good info. but hard to get through

The book really does have some good information on the historical New Testament. I am taking on faith that Mr. Ehrman is truly the scholar he says he is, and that his historical data does, in fact, reflect the information one would receive at a university when studying the topic. My problem with the material is that the dissemination of this historical information is only about half of the book. The other half is repeating, ad nauseam, the information presented, combined with a rather self-aggrandizing account of the author, his life, and his beliefs (which are also repeated many times). I kept finding myself wanting to shout "you said that already, at least twice, move on!" every 10 minutes or so. He really needed a better editor to cut out all the noise and help him stick to the topic, which would in turn have alleviated some of the need for him to constantly mention that he didn't have the space to go into each topic in more detail.

This book is packed with useful information. I highly recommend reading this book ecspecially if all you've ever known is what you've been told from the pew.

I debated whether to give this book 4 or 5 stars, I love and admire his work, this volume should really be read as a supplement to Misquoting Jesus, however compared to Misquoting Jesus, this book is less subject focused, i.e it went from a book about textual discripency to biblical history to religious ethics to personal experience. I agree with the sentiment and historical approach to religion, I still wish this volume provide more scholarly and academic information than it does, maybe I am too greedy. I remain the author's most loyal fan and disciple.