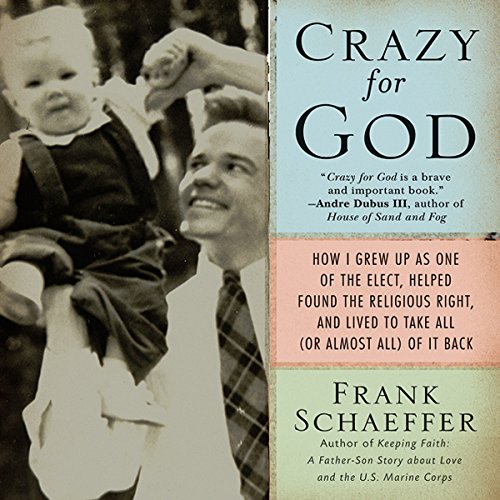 How I Grew Up as One of the Elect, Helped Found the Religious Right, and Lived to Take All (or Almost All) of it Back

By the time he was 19, Frank Schaeffer’s parents, Francis and Edith Schaeffer, had achieved global fame as best-selling evangelical authors and speakers, and Frank had joined his father on the evangelical circuit. He would go on to speak before thousands in arenas around America, publish his own evangelical best seller, and work with such figures as Pat Robertson, Jerry Falwell, and Dr. James Dobson.

But while coming of age as a rising evangelical star, Schaeffer felt increasingly alienated, and as a result, he experienced a crisis of faith that would ultimately lead to his journey out of the fold - even if it meant losing everything.

“ Crazy for God offers considerable insight into several issues that have bedeviled American life in the past thirty years…. it gives us not only a handle on the mess we are in but also quite a few laughs.” (Jane Smiley, The Nation)
“ Crazy for God is a brilliant book, a portrait of fundamentalism painted in broad strokes with streaks of nuance, the twinned coming-of-age story of Frank and the Christian right.” ( New Statesman)
“Schaeffer describes a life that was by turns happy, difficult, idyllic, and completely nuts…. He’s a world-class storyteller.” ( Christianity Today)

What listeners say about Crazy for God

I expected to read a book that criticized a strict the author's religious upbringing, and instead was delighted to hear the author's empathetic, sensitive description of his parents' struggles with religion, their changing views over the years, and the public vs. the private face of their convictions. He expresses a great fondness for his family, and describes his unusual childhood with candid wit. In the final third of the book, Shaeffer exposes the hypocrisy of televangelism and the Republican party's cynical co-opting of evangelical Christianity for political gain. Unlike the previous reviewer, I didn't find his descriptions offensive ?????? he writes with a dark sense of humour, and what he writes has the ring of honesty.

An unorganized memoir devoid of context

Frank Schaffer's sometimes fascinating, but ultimately frustrating, memoir never delivers on the promise of its subtitle, "How I .. helped found the religious right, and lived to take all (or almost all) of it back."

In fact, Crazy for God suffers from an almost complete lack of context. The listener doesn't learn much about how the religious right formed or how it influenced Republican politics, or anything about the movement's champions beyond Schaffer's terse judgments of them. (James Dobson is power hungry; Billy Graham just plain weird.)

Instead, Schaffer paints a vague picture of his intellectual father as an early "culture warrior" - determined to take art, music and philosophy back from the secularists and root it firmly in a Christian worldview. Touring the United States to lecture and to screen their documentary series, father and son light a spark beneath the evangelicals who will create the Christian Right - but it takes nearly two-thirds of the book, a meandering journey through Schaffer's childhood and teenage years, to get there.

Most of the memoir centers on Schaffer's childhood growing up in L'Abri, the Christian retreat center his parents founded in Switzerland. Francis and Edith Schaffer worked to change the image of Christianity as "dumbed down" by offering a place for young seekers to discuss life's big questions in a cultured, intellectual environment. Unfortunately, doing the all-consuming "Lord's work" left them with little time to raise their youngest child and only son. (When they thought to send him to an English boarding school, young Frankie could barely read or write, a deficiency complicated by his undiagnosed dyslexia.)

Schaffer abandons a narrative arc for a stream-of-consciousness portrayal of his family, warts and all. His father is revealed as an introverted, passionate thinker and lover of art and music, who chafed at a life filled with European lecture tours and discussing theology with L'Abri students over the dinner table. He suffered bouts of deep depression and all-consuming rage. His mother emerges as a snob working to win the "right sort" of cultural elites to Jesus and a practiced martyr who let everyone know she could out-work and out-pray them all. She competed endlessly with her husband to be seen as the better thinker, writer and Christian.

Schaffer's childhood recollections jump haphazardly between topics such as his parents' marital troubles, family vacations in Italy and the Swiss Alps, his much-older sisters' early efforts to educate him, and later, his obsession with sex and the attractive women staying at L'Abri. Taken individually, some of the chapters are memorable, offering stunning descriptions of the beautiful valley where L'Abri was located and tidbits of humor, wisdom or insight. But as one chapter after another continued to describe Schaffer's youth, I started glancing at the time left in the book, wondering when he would get on with the story.

Despite Schaffer's unflinching portrayal of his parents' faults, I never felt I knew these people. Why did they devote their lives to L'Abri, when Schaffer asserts they were ill-suited to such a lifestyle? (Both would seemingly have been much happier as college professors teaching about art or music.) Why did Schaffer himself emerge in his 20s as an anti-abortion crusader and uncompromising evangelical firebrand, when his family's Christian work left him feeling so odd and alienated as a child? He doesn't offer any answers. He shares scandalous tidbits (such as his mother telling him, when he was quite young, she had to travel with her husband to all his lectures because he expected sex every night) but doesn't reveal enough about their motivations or why they held such cherished beliefs. Again, his memories lack any context to help the listener make sense of this odd family.

By the time Schaffer, an ambitious young filmmaker, persuades his father to denounce abortion in their first Christian film series, the payoff isn't worth slogging through the book's first two parts. After taking so much time to ruminate on his childhood, Schaffer must rush the rest of the story along. It feels almost like a "tell all" for former evangelical Christians, people already familiar with the religious right and its leaders who just want to hear the salacious details. Those of us who are outsiders looking in, hoping to gain some insight on the movement, are left with nothing new. It's always a bad sign when I search Wikipedia for information that should have been in the book.

I've recently become fascinated with the memoirs of people leaving extreme religious movements, but I will have to look elsewhere for a solid insider's account of the Christian right. Schaffer's book offered a lot of unorganized details but not much substance.

I must have been living under a rock, because I had never heard of the conservative evangelical theologian Francis Schaeffer, let alone his son, Frankie.

Purportedly one of the founders of the pro-life movement, later a low budget filmmaker and then a popular secular novelist, Frankie's family's impact on right wing America was news to me.

An interesting, brutally honest book, now I just need to learn more about his family to figure out if I can trust his account.

The Franky Schaeffer We Knew

Honesty is refreshing to gain insights into beliefs. I recommend this read to learn more than you might like to find out.

Actually I respect the Schaeffers more after reading?

Long story short it's actually a very insightful read and I am joyed it; it also made me think higher of the Schaeffers because they are human just like the rest of us? It's definitely no masterpiece, and Frankie's reputation of always feeling sorry for himself of you that I have heard from numerous people ever since he was a kid through today can definitely be seen throughout this book or he constantly laments and feels sorry for himself on the same time constantly praising himself. Either way it's insightful and worth the read but you will definitely get the whole "wow… Frankie really was a spoiled brat and still is?" Type feeling throughout. :-)

this is a beautifully written book...as a former evangelical myself, i could relate to so many things in the book...a joy to listen to!

It was delightful, full of whit, and thoroughly enjoyable cover to cover. Thank you for making this recording.

This book is a memoir and NOT how Religious wackos have influenced America as some of the liner notes suggest. Granted there is very little of that sort of information and what little there is happens to be informative but mostly this is a biography of IMHO a very uneventful uninteresting life. Angry I wasted my time listening to this.

I was familliar with the name Francis Schaeffer (Christian theologian) and of 'L'bri' a kind of Christian retreat/learning center in Switzerland begun by him that gained a reputation as a kind of intellectual retreat for those seeking answers to their spiritual questions in an atmosphere of scholarship and intellect. So I was happy to see who wrote this book (Schaeffer's son) and looking forward to hearing a description of growing up in that atmosphere. I am still listening to the book, but so far am quite unimpressed by the book and less so by the author. For example, Schaeffer takes a lot of cheap shots in his descriptions of the evangelical leaders he once worked with. My chief objection is that the organizations these leaders head have donated millions of dollars to help people all over the world--started hospitals, dug wells, started educational programs in places where none existed before, etc. These leaders that he makes sarcastic jokes and comments about started organizations which have saved and improved the lives of people in 3rd world countries and given them hope where none existed. My 'bone to pick' with the author lies not in his criticisms, or even the way he expresses them, but in the fact that he gives no reason why I should accept these criticisms of the evangelical community at face value. Jesus said in the scriptures "by their fruits you shall know them". Well, I know the fruits of the leaders he so glibly criticizes, but I really have no idea of what fruits Schaeffer has produced in his own life, to be able to throw stones at other people's houses. How many poverty stricken people has he helped? Does he give part of his book profits to help the less fortunate? If he does give to help others, he has the credibility to have my attention and listen to his criticisms. But if he does not, then he is far worse in moral character than those he seems to take such pleasure in skewing. It is in many aspects, though, an 'eye-opening' read,