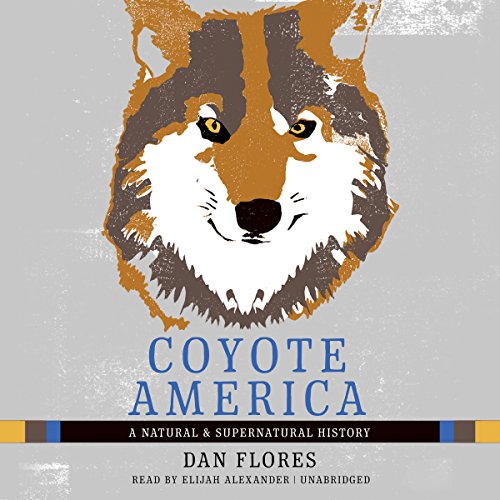 A Natural and Supernatural History
By: Dan Flores
Narrated by: Elijah Alexander
Length: 8 hrs and 51 mins
Categories: History, American
4.5 out of 5 stars 4.6 (22 ratings)

With its uncanny night howls, unrivaled ingenuity, and amazing resilience, the coyote is the stuff of legends. In Indian folktales it often appears as a deceptive trickster or a sly genius. But legends don't come close to capturing the incredible survival story of the coyote.

As soon as Americans - especially white Americans - began ranching and herding in the West, they began working to destroy the coyote. Despite campaigns of annihilation employing poisons, gases, helicopters, and engineered epidemics, coyotes didn't just survive, they thrived, expanding across the continent from Anchorage, Alaska, to New York's Central Park. In the war between humans and coyotes, coyotes have won hands down.

Coyote America is both an environmental and a deep natural history of the coyote. It traces both the five-million-year-long biological story of an animal that has become the "wolf" in our backyards and its cultural evolution from a preeminent spot in Native American religions to the hapless foil of the Road Runner. A deeply American tale, the story of the coyote in the American West and beyond is a sort of Manifest Destiny in reverse, with a pioneering hero whose career holds up an uncanny mirror to the successes and failures of American expansionism.

An illuminating biography of this extraordinary animal, Coyote America isn't just the story of an animal's survival - it is one of the great epics of our time.

Absolutely loved this book. A fascinating insight into coyotes and our interactions with them throughout history. In addition, it was wonderfully narrated, I highly recommend it to anyone with an interest in natural history, and human-carnivore/opportunist interactions.

What made the experience of listening to Coyote America the most enjoyable?

Over the last few years I've stumbled into a deep interest in North American natural history (plants, animals, and indigenous peoples that preceded European arrival), and how modern humans have played into it.

Listening to this book was an easy choice after I heard the author (last name pronounced floor-ease) speak on a few podcasts, ReWild Yourself #93 and The Meateater #33. There are handfuls of hard, powerful - often horrifying - looks at Americans and the U.S. government interacting with coyotes. Many of these stories are shocking, yet they make for important and captivating storytelling; they are memorable anecdotes that enrich our understanding of the transition the natural world endured following European arrival.

I dug the author's bias toward natural history told from an eco-centric (vs. ego-centric) perspective. He doesn't tell the story from the vantage that says humans are the apotheosis of life on earth and thereby possess a warranted dominion over all things animate and inanimate. Rather he writes looking at coyotes as they truly are in a biological sense: a wild species part of the landscapes and ecoranges they evolved on. He contrasts the coyote's incredible biological resolve against the often bizarre, control-obsessed campaigns waged against it by modern humans.

Have you listened to any of Elijah Alexander’s other performances before? How does this one compare?

The reader's pronunciation of some words was interesting, but didn't take away from the overall story.

Much looking forward to the author's similar book, American Serengeti. If you don't have time to listen to Coyote America in its entirety it's worth checking out episode #33 of The Meateater Podcast. It clocks in around two hours and holds some of the best information on American natural history and the mammals and other animals that existed here prior to the Anthropocene era.

I approve of this audiobook. I basically listened to it due to the fact that there isn't a mammal alive that I dislike to the degree that I dislike canis latrans (still bitter about the loss of my childhood pets thanks to them) and I wanted to know more about them and hopefully develop some empathy. This book did that. Flores is a gifted author and audiobook reader a damned fine reader.

This book is a wonderful balance of story and facts that keeps you wanting more. I am a Park Ranger and can’t wait to use some of this material in Programs for the public. I wish there was more folklore, but I think I can find separate books on that. This book inspired me to learn more and better connect to our natural neighbors.

I found this book absorbing in its description of our wonderful, fascinating native critter, the coyote--its evolution, ability to adapt and survive, and its incredible intelligence. Our attempts to totally destroy this animal, to wipe it completely from the face of the earth, with unbelievably horrendous poisons and other unspeakable methods make me deeply ashamed. It was engaging to read about the coyote, but almost impossible to read about what the government, in our name, has done to kill it.

But the coyote has continued to thrive and increase its range into our cities and suburbs. The author tells us how to live with this wild creature in our midst, to avoid contact but to simply enjoy occasional sightings of something from our wild past that is with us in spite of our efforts to remove it.

A good mix of natural history and our role in the North American ecosystem. Interspersed with reflections and observations about our nature.
Didn't love the cadence of the reader but nothing to turn you away.

I thought I was going to get some info on behavior, breeding, territory . . . the usual educational stuff.

Nope - there's all that and more. First of all, the narrator was great! Some of these non-fiction audio books get stuck with dry monotone-ish readers, but this narrator was really into the book and made the audio book a pleasure.

Secondly, what in the world did they forget to teach me in history in school? A lot. I must have gotten the redacted version of western history. Along with the story of coyotes comes the story of the West. And, while some of it isn't pretty, it is by knowing things that we can change things for the better.

The book starts with a great foundational introduction, covering geological, geographical and species across time and lands. And we get some entertaining Native American coyote mythology, and the situation of urban coyotes in New York and Los Angeles (I think Chicago too), and then in the middle of the book we go back to the plains and deserts and even Yosemite and there is a whole lot of information on what's been going on - been done - to animals, millions and millions of animals and most of us have no idea about it. Killing of coyotes has been honed to a science, but studies that include examination of stomach contents and scat have shown what percentage of what animals coyotes really eat and while being blamed for many kills, not all kills attributed to coyotes are correct.

It appears that a lot of the coyote killing is not for correct reasons, or even effective due to how coyotes breed, but it does make certain people feel better. And provides jobs.

Studies are shared - layman level. And we consider the types of people who interact with coyotes. And, near the end we go back to the Greater Los Angeles area and see how coyotes are doing. Especially interesting to me also, near the end, was the discussion of hybrids, the red wolf, wolves, and the results of genetic studies. And, Wiley Coyote was not left out . . .

This is a science book for layman, but written in a very interesting and entertaining style. I learned a lot - kind of a Coyote 101 experience. If you are a person who lives in an area where there are coyotes, where you can hear them if not see them, you may especially enjoy this book too.

Covers a Lot of Interesting Ground

Narration was good, the coverage was broad - from nature to science to politics, and from wolves to ranchers to their new urban haunts. Many good anecdotes. I didn't know what to expect - I purchased the audio book for two reasons: 1.) as a relief from just listening to the new quantum loop gravity theory, and I received said relief; and 2.) I purchased it to enhance my grasp of reality, which has a direct bearing on the quality of my new philosophy.

The book kept me interested all the way through. It did three things to me: 1.) it made me want to get more books that contain in-depth studies of specific animals (though I've listened to many already); 2.) it made me want to vote Democrat (that actually went through my head) (but I'll go for enlightening the world instead); and 3.) it made me more aware of existing nature.

More about politics than about the coyotes

I love the parts where the author focuses on the lives of the coyotes but those were unfortunately buried in his focus on politicians.

Yes, politics are an important part of the coyote story past and present. It has to be covered. However, I learned more about politicians than about coyotes in this book. You will learn some interesting things about the animals in this book scattered amongst folklore and Washington DC stories.

In a book about coyotes, the author could have skipped the personal histories of each politician and spent much more time on the animals, their behavior, their lifecycle, etc. I learned more about coyote behavior from the state fish & wildlife website than I did from the book. That’s a shame.

My intrigue about this book came from listening to the author's interview with Joe Rogan. As a great fan of Wiley Coyote, and having had several run-ins with coyotes throughout California, this book gave context to my mysterious fascination with them. It's a different kind of wisdom, and a non-linear logic that I really appreciate. The stories and factoids in Coyote America are remarkable, and I've already recommended this book to my trickster friends and family. A great read for long drives.

Just can’t stick with it.

I usually enjoy and appreciate information on animal species. I have been curious about coyotes for a long time and hoped this book would enlarge my knowledge of the subject. I expected to like this book. But after several chapters, I’m done with it. There is too much repetition, too little smoothness of flow. As I listened, I found my attention wandering often in spite of my best efforts to focus. I never have this problem with a well written book. I’ll get my coyote fix elsewhere.