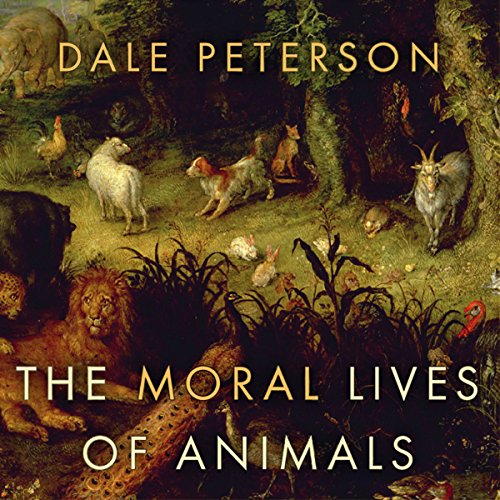 The Moral Lives of Animals

By: Dale Peterson
Narrated by: Sanjiv Jhaveri
Try for £0.00

Wild elephants walking along a trail stop and spontaneously try to protect and assist a weak and dying fellow elephant. Laboratory rats, finding other rats caged nearby in distressing circumstances, proceed to rescue them. A chimpanzee in a zoo loses his own life trying to save an unrelated infant who has fallen into a watery moat. The examples above and many others, argues Dale Peterson, show that our fellow creatures have powerful impulses toward cooperation, generosity, and fairness. Yet it is commonly held that we Homo sapiens are the only animals with a moral sense - that we are somehow above and apart from our fellow creatures.

This rigorous and stimulating book challenges that notion, and it shows the profound connections - the moral continuum - that link humans to many other species. Peterson shows how much animal behavior follows principles embodied in humanity's ancient moral codes, from the Ten Commandments to the New Testament. Understanding the moral lives of animals offers new insight into our own.

Dale Peterson's biography Jane Goodall: The Woman Who Redefined Man was a New York Times Book Review Notable Book and Boston Globe Best Book of 2006. His other publications include Visions of Caliban (with Jane Goodall) and Demonic Males (with Richard Wrangham). Peterson lectures in English at Tufts University.

What listeners say about The Moral Lives of Animals

Read This Book Along With One...

entitled Wild Justice. They complement each other nicely. (Both are much better than Temple Grandin's rather disappointing Animals Make Us Human.) It is high time someone wrote a book or two on this subject. Endless Neo-Darwinians (Pinker, Nowak, Wright, et. al.), writing of the development of morality in humans, have used animal examples to demonstrate the concept of reciprocal altruism and how morality has evolved to preserve species through group caring and protection. It only makes sense that if humans need each other to survive in a rough and tumble world, and morality developed in order that we help each other out and resist harming each other at least a majority of the time so that we can better reproduce and carry on--how much more for other mammals who have to spend some time raising their young in groups and living in those groups sometimes for an entire lifespan? (It is suggested that the more social a mammal is, the more it will be geared toward moral behavior toward other members of the group, which makes perfect sense in this context...) We all know stories of dogs jumping into rivers to save little girls and cats waking tenants of a burning apartment complex (when they could have just run for their own feline lives!), but working with horses, I see smaller examples all the time. Just the other day, after a ride, I was returning my horse to pasture, and her pasture mate, very uncharacteristically, bolted and ran through the gate and had an escape and was heading for a rather dangrous situation near a road. Without prompting or any training in such a situation, my horse, Sassy, instantly took to the task of helping me corral the fleeing Ore back around toward the pasture and safety. It was unmistakable to me that my horse was doing me (and her pasture mate!) a favor because I needed help and she loves me and knows I do good things for her and will continue to do so (this is the entire basis of reciprocal altruism, which is the foundation of morality). But then, if you like the dramatic, life-saving examples, when you are done with this book and Wild Justice, read Cheryl Dudley's Horses That Save Lives. In short, The Moral Lives Of Animals is thorough and engaging--but it will tell someone who has worked for any time with four-leggeds what he knew all along: animals decidedly have a moral sense--and it aids in their everyday survival the same as it does for us.

Sanjiv Jhaveri really brings life to this book. He manages to expertly convey nuance and personality.

This was not a bad book, but I would classify it more as a book about philosophy than I would a work of non-fiction. The most quoted work is Melville’s Moby-Dick, and while most of the time he uses it to frame the extremes of the argument of the morality of animals, at other times he also seems to be using it as an actual reference of fact. His basic argument is that animals are moral, but that it is a different type of morality than that recognized by humans; sort of a species specific morality. While he develops this theory in great detail (other reviewers seem to think too much detail), in the end he makes a leap saying that, while humans and other animals all have this species specific morality, that humans should broaden their morality to encompass all other species, even though he just argued for "X" number of pages saying this was unnatural. In short if you tend to lean heavily to the “Animal Rights” side of civilization you will love this book. As you drift away from that being your “singular goal” I would say your excitement will also drift.

If you could sum up The Moral Lives of Animals in three words, what would they be?

What could Dale Peterson have done to make this a more enjoyable book for you?

have a competent editor cut it in half; have more of his scholarly experience appear near the front, which now reads like an adventure tale of youthful avocational interest and passion, with no assurance that it will actually lead somewhere important (which it eventually does, in fact, do)

The narrator reads every sentence as if it was the climax of the paragraph, so it was exhausting to listen to.

The Moral Lives of Animals is to long

The Moral Lives of Animals
Interesting topic but this book could have been much better at half the length.