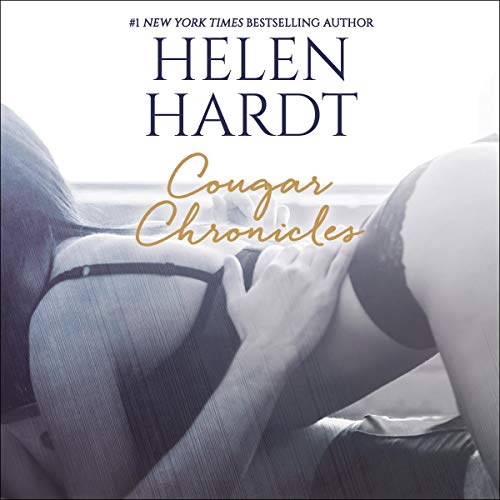 By: Helen Hardt
Narrated by: Jill Redfield
Try for £0.00

The Cowboy and the Cougar

A hot time with a gorgeous young cowboy is just what the doctor ordered for forty-year-old Holly Taylor. But after a night of amazing passion, she leaves discreetly. Life has other plans for her at the moment.

After the best sex of his life, single father Jack Sherwood isn’t ready to give up his mystery woman. When he runs into her several months later, he’s relentless in his pursuit, and he doesn’t care a whit about their eleven-year age difference.

Holly’s life has taken a new course since her first meeting with Jack, and she’s convinced she’s not what he and his adorable son need. Can her new friends at The Cougar Club persuade her to stop running? Or will she lose the best thing to ever happen to her?

Michael Moretti, age thirty-six, knows his career as a cover model and exotic dancer is rapidly coming to an end due to his age. He has his own reasons for attending this conference - find an attractive older woman whom he can woo into keeping him in the lifestyle to which he’s become accustomed. Lovely Stacy fits his requirements nicely.

With Michael’s help, Stacy begins to overcome her shyness and engages in some exciting activities both outside and inside the bedroom. But she’s nobody’s sugar mama, and she makes that clear to him when she finds out his ulterior motive. Too bad for Michael, who finds out he just might be in a little deeper than he thought.

What listeners say about Cougar Chronicles

Story 1: Cowboy and Sugar, just about sums up the rodeo these two were on. Beautifully written, crafted and narrated like only Jill Redfield can.

As an older women, it's nice to see how other cougars have dealt with their "cubs" (didn't know that's what the male component of these relationships was called before this). Both have a HFN,

Well worth the credit, well done Audible another gem.

I really enjoyed both stories and although they weren’t super long, Ms. Hardt has a way of telling an amazing story, with just enough sexy/sex/steam! She’s incredible, the narration helps, it wasn’t bad at all, so Kudos on another hit and as I’ve seen pointed out in other reviews if you have a problem with the cougar thing, what generation are you living in? Men literally do it every day. Honestly, I think it depends on how big the gap is and how mature both parties are some people just are more wise than others period, I know a couple of kids who have been described as having an old soul.....Doesn’t mean I would pimp out kids!!👎🏾😱😳I’m just saying some people really do start out ahead of their time...🤔🤔

Love Helen Hardt. If you haven't read anything from her, well, it's time. I'm a huge fan of Steel Brothers Saga. About Cougar Chronicles: Get both, book and audio. Read it in one night. If you're in the same situation or not a judgmental person, who understands that every person is different and life is full of surprises, you will enjoy both stories. Happiness can be found everywhere at any time in one's life regardless age and circumstances. And if men do it, why can't a woman be desired too. Even more when this woman is alive and still as beautiful as she has been for the last 10 or 20 years. 😉