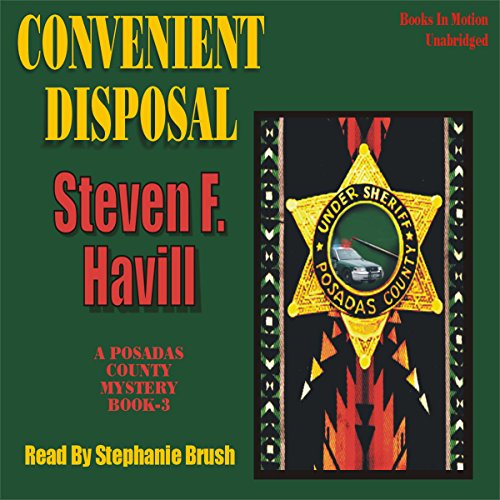 To most people, hat pins are vestiges of the past, used now only by elderly ladies who don't leave home without a hat. But recently, the notion store in Posadas County has been doing a good business selling hat pins to teenage girls. Following a "cat fight" over a boy, one of the girls, Carmen Acosta, had been suspended from school. But Carmen's friends are still around. So Deena, Carmen's rival, wants something with which to defend herself.

Not long afterward, Posadas County Undersheriff Estelle Reyes-Guzman is called to Carmen's home. When she arrives, Carmen's father is in police custody and an unconscious Carmen is on the way to the hospital "beat to a pulp". Of course, it's hard to believe that young Deena is responsible. Estelle has many other suspects to choose from, since the Acosta family holds the record for the number of domestic violence calls the police have received. The question is, which of the other four children, or which parent, is responsible? Or is it someone else entirely?

What listeners say about Convenient Disposal

Not as good as previous books

This was an OK book but not as good as previous books. I like Beth Richmond as a narrator. Her voice has more of a hispanic tone than Stephanie Brush. What is missing with this book is the family life of the characters. There was some, but not very much.

Having listened to most of the initial Bill Gastner books, I missed his voice. However, Stephanie Brush does an excellent job, even the difficult task of voicing numerous male characters. This story, like the others, conveys the atmosphere and the personalities of a small town beautifully. The plot is involving, and the conclusion really very dramatic. I hope Mr. Havill keeps writing.

keeps your interest. you feel connected to the characters and their part in the story