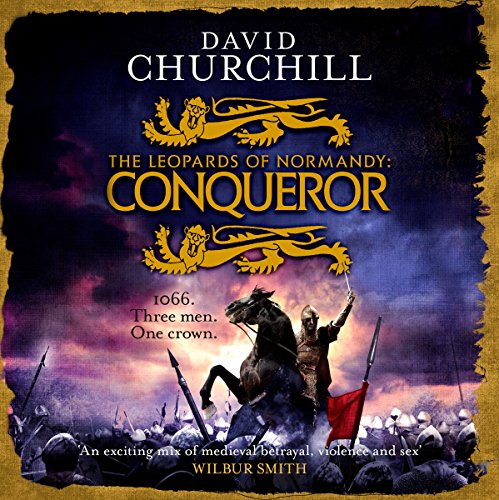 By: David Churchill
Narrated by: Russell Bentley
Try for £0.00

The Leopards of Normandy trilogy concludes with Conqueror as Duke William prepares to take England, and his rivals for the English throne, by storm.

This vibrant series by David Churchill, coauthor of War Cry, the upcoming Courtney novel by Wilbur Smith, is a must-listen for fans of Bernard Cornwell and Conn Iggulden.

It began with a promise. It will end at Hastings.

William of Normandy, sworn heir to the English throne, is no longer the boy duke but a loyal and proven warrior. Few dare challenge him, but England is an irresistible prize. The handsome, ambitious Harold Godwinson and the Viking Hardrada are both determined to stake a claim. William faces his greatest ever battle: deny his own destiny or conquer the land he was born to rule. History will be written in the blood of those who fall.

What listeners say about Conqueror

Incredibly engaging and informative way of understanding the events around the Battle of Hastings.
Thje personalities and Political issues involved are explored and brought together which allows you to understand the events easily.
Excellent.

Far too long. Too much "romantic" in story. Dialogue is dreadful. The first 2 in this series were good - he lost his way with this one

Keep your eye on this one, Harold

Who needs fiction? The drama of reality can often be more interesting than the imaginary. Not strictly fact and with plenty of poetic license it does contain enough knowledge and understanding of the period to make a fine faction novel.
A very good no intrusive performance by the narrator that adds flesh to the characters.
It would be a full five star from me but for the unnecessary intrusion of . . . . sex. Descriptive sex should be both well done and serve a purpose. Here it is neither. It's omission would detract nothing from the book and one has the feeling that it has been added in a misguided attempt at 'popular ' fiction. Perhaps a. 'Game of Thrones' syndrome.

I'd have preferred it to have started rather than ended at Hastings and concentrated more on William than his contemporaries.
Nonetheless it is a brilliant interesting and entertaining version of historical events.
Let's have another please