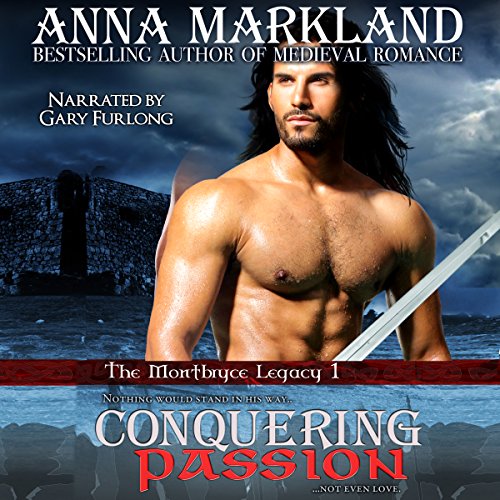 The year is 1066. Events are unfolding that will change the course of history.

Conquering Passion is an epic medieval romance. The first book in the family saga series The Montbryce Legacy, Conquering Passion introduces us to Rambaud, Antoine, and Hugh de Montbryce, brothers from a noble Norman family with a long and illustrious military history. The eldest brother, Ram de Montbryce, is an ambitious warrior, greedy for glory and power in the service of his friend, William the Conqueror. His heroism at the Battle of Hastings helps secure the Norman victory and earns him an earldom in newly conquered England. Nothing can stand in the way of his ambition, especially not love. He recognizes he has an obligation to marry but believes the woman his father has chosen for him is unsuitable.

Mabelle de Valtesse has spent years wandering through Normandy with her exiled father. When his lands are finally restored to him and freedom is within her grasp, her father betroths her to Ram de Montbryce. Together Ram and Mabelle struggle to establish a powerful dynasty in a hostile and dangerous medieval world. They share passion, but can a warrior like Ram, who demands obedience in a wife, find love with the willful refugee brought to his bed in an arranged marriage?

They are drawn to each other physically, but it takes a cruel separation to make them realize the depth of their mutual love. Power and wealth will mean nothing if Ram cannot rescue her from her kidnappers.

Can love survive and flourish amid the carnage, hatred, betrayals, and dangers of the Norman Conquest?

If you could sum up Conquering Passion in three words, what would they be?

never lost interest all the way through

I did listen in one sitting

An Exquisite Tapestry of Love

This is the first narration I've heard by Gary Furlong. He is so easy to listen to, a sensual feeling to his words, a perfect sound for the Montbryce brothers' voices.
Anna Markland weaved a wonderful romantic story full of the early doubts of true love between Ram and Mabelle. Their denial of love, yet their devotion to their passion flows through the pages of events of the ravages and devastation of the Norman conquest of England.
A story of the Welsh struggle against the Saxons and Normans through Rhodri's character adds an intriguing and mystic element to the exquisitely woven love story of Ram and Mabelle Montbryce.
I will look for more books of Anna Markland and definitely more narrations by Gary Furlong!

I loved the book years ago and having it read to me now was wonderful. I had forgotten most of the book and it was all new again! You really should listen to it even if you read it before.

I have yet to read the book, though I do have it, because I wanted to be able to hear the correct pronunciation of the names as well as the correct dialect. I loved the book to the point where I found myself feeling interjected into the story as an outside observer. The emotionalism/feeling written into the story are epic. I laughed, I cried, and even caught myself giving unsolicited advice to a couple of the characters.... lol. Gary Furlong did a masterful job with his narration. I believe that perhaps this is the first book I've heard with his narration. His skill with accents, dialects, and storytelling really brought the book alive! I can't wait to read, or listen, to the next story. Hopefully this is a series! 😀 It's a don't miss, in ebook and audio book format! Enjoy...