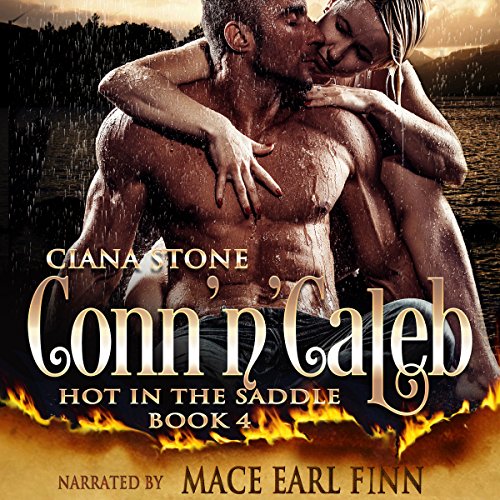 Single and loving it! That’s Caleb, the only Russell man not yet hitched, and that’s fine with him. Life’s good - if a little predictable. Until a little lady drops out of the sky and into his kayak, nearly drowning him in the process.

But getting wet is the least of his problems. Seems like Caleb’s going to follow his brothers when it comes to fixing on kinda offbeat women, because Conn isn’t like any woman he’s ever known. But then he’s never met a woman who isn’t from this world. And he sure as shit hasn’t ever met one who can put as much starch in his shorts and fire in his blood as Conn can with just a look.

Caleb thought he was a master when it came to seduction and making love. What he’s about to learn is that he’s only touched the tip of the iceberg.

What listeners say about Conn'n'Caleb

Wow this fourth book in The Hot In The Saddle Series took quite a turn and involved aliens this time around. I guess it shouldn’t have been surprising since the previous books included witches and shape shifters. There were some pretty comical scenes in this one as well as a good mystery. There was a bit more sex than the previous books as well, which I found myself fast forwarding through after awhile, however for those who enjoy that sort of thing you won’t be disappointed. I didn’t quite feel the passion between this couple as I did with the others so it wasn’t my favorite book however I still enjoyed the story. I thought the storyline was intriguing and creative and, as I said previously, there were some good laughs throughout. Mace Earl Finn did a great job with the narration, as usual. I received a free copy of this audiobook and have voluntarily provided an unbiased review.

The fourth book in this series is mindblowing, having read the book first and then listening, especially with this narrator, bring so much more to the story and the characters. I love the twist of supernatural written into stories with regular people and finding romance with a bite of suspense. An awesome book, wonderful writer with a great imagination.

not only cannot he pronounce easy words but in trying to do voices, everyone is whispery, nasally and lispy. Horrible!!!!!!! Good story ruined my ridiculous narration. Sad!

Enjoyed this story with unexpected path to love. Not like any other romance that I have heard or read before which made for a really nice change. Was not thrilled with the narrator's accent/voice when he was voicing Caleb, but got used to him after a while.

What do you add to a family that has skin walker, witches and American Indian. Of coarse you add an alien. The sence of they sitting at the table talking for the first time had me crying I was laughing so hard.new author and narrator to me but enjoyed both.

Sorry, I didn't care for the narrator.

This is the first audiobook I've listened to performed by Mace Earl Finn and I didn't really care too much for his narration. I felt like his voices sounded too much alike and not much like a performance (I've become spoiled by my favorite narrators who "perform" books).

The story was pretty hot but I wasn't expecting the paranormal aspect (shame on me, I must not have read synopsis close enough) but that didn't really bother me as I do like paranormal stories. I admit to doing other things around the house while I listened to this, but this hasn't mattered for other audiobooks I've listened to. I really think it was just the narration that failed to keep my attention. I believe if I had read this book instead it would have been a different story as I have enjoyed others by this author.

I would read more stories by Ciana Stone but I don't believe I would listen to any others by this narrator.

I received a copy of this audiobook from the publisher but my review was voluntary.