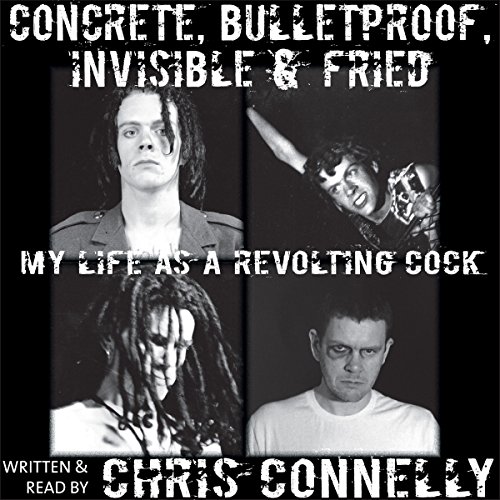 When hardcore industrial rocker and Ministry supremo Al Jourgensen recruited Chris Connelly as a singer for the Revolting Cocks, the young Scottish lad could hardly have imagined the mayhem that was about to ensue.

As an integral part of Jourgensen's Mad Max-like mutant family of musicians, Connelly joined a drug-crazed travelling circus. Live shows were transformed into an ear-splitting redneck disco from hell, under the influence of a mind-boggling cocktail of every conceivable narcotic, with sleazy strippers and even reports of live cattle on stage.

As well as Jourgensen and all the Wax Trax! crew, the book features cameo appearances by Ogre of Skinny Puppy, Trent Reznor of Nine Inch Nails, Killing Joke, Jah Wobble, and Cabaret Voltaire.

Despite the unrelenting chaos, both Ministry and the Revolting Cocks have been immensely successful; Connelly appeared on two US gold albums (The Land of Rape and Honey and The Mind is a Terrible Thing to Taste) and worked as songwriter on the million-plus selling platinum album Psalm 69: The Way to Succeed and the Way to Suck Eggs.

Connelly's superbly written, funny, irreverent, and sometimes downright scary memoir is one of the finest portrayals of a man trapped in the eye of a post-punk industrial storm this side of Armageddon.

Chris Connelly was born in Edinburgh, Scotland, and now lives in Chicago where he has pursued a successful solo career.

What listeners say about Concrete, Bulletproof, Invisible and Fried

Chris Connelly may not be a well-known name in rock circles but he certainly experienced a lot of the thrills, spills and bellyaches.

His disdain for Al Jourgensen is obvious and he deals with it really in a humorous way. I especially liked his piss-taking of bands like Sepultura and obscure European noiseniks.

Connelly's Edinburgh accent is easy on the ears and I'm glad I bought this over the book version.

This is without a shadow of a doubt the best audiobook that I have listened to. Chris Connelly tells all, in a unique style, about his life as a musician and the debauched journey that it led to.
No punches are pulled and things are not either demonised or made overly glamorous either. It is just told as it is, obviously from his own point of view.
Without wanting to be clichéd, the book made me smile, groan, grimace and laugh out loud in equal measure.
I binged the book in an all night listen whilst not being able to sleep in lockdown for Covid-19. Worth every minute.
You don’t need to be a fan of Connelly in any of his guises, whether it be as a member of Ministry, Revolting Cocks, Pigface, Cocksure, Bells into Machines or any other side project. But if you are, why haven’t you read or listened to this?

Hilarious account of life in the industrial music scene

Chris’ account of life as a member of Ministry, Revolting Cocks and more will be fascinating to anyone who remembers that scene through the late 80s and 90s. His anecdotes are hilarious and listening to him tell them as he narrates this audiobook even more so.

I loved his impressions of some of the well known characters around him, and the occasional moments of him breaking down in laughter. He has a talent with words, making the book enjoyable in itself, but his narration adds so much more. I’m so glad to have listened to this as an audiobook.

It would be easy to dismiss this collection of hazy, drug fueled tales from the glory days of Industrial music if it weren't for the wonderfully likable, and self deprecating, tone of Chris Connelly.

Now, I don't even know the works of Ministry, Pigface or the Cocks, but none of that matters in my appreciation of this book.

What makes this read so enjoyable is Connelly's unrepentant celebration of the abstract Rock reality, where he dreamily lived ( in a bus bunk, from tour to tour, indiscriminately pounding narcotics (of all levels) and mounting everything that moved) until "something" snapped..

Connelly also is also refreshing in his willingness to dish the dirt and happily reveal the failings of ego driven, drug addeled "rock stars" as they celebrated the chase of The Big Dumb.

Call it good old Scottish self deprecation, but It also should be noted that Connelly never let's himself off the hook. Sure, this book is a unfettered hit piece on Ministry's Al Jourgensen, but who cares! Hit pieces are fun! And, let's face it, Al Jourgensen really needs a literary kick to the bait and tackle.

And he NAILS the reading. Also, the production of this book is very interesting, as the tight comical edits help convey the manic pace of the times. This one made me laugh out loud many times.

What made the experience of listening to Concrete, Bulletproof, Invisible and Fried the most enjoyable?

Connelly's wit and sincerity:
That is right. Connelly narrates his own book. (In case you missed that part.) It is as if you (the listener) are sitting in a room with Connelly as he invites you to unravel the dingy infested era of industrial music.The listener is immediately charmed by Chris Connelly's Scottish accent and honesty.

The fact that I am such a fan of industrial music:
Connelly shares many great (and sometimes tragic) stories of the various key names that made up the rusted mud pit that was 90's industrial/Alternative. Examples are (but not limited to): Pigface, KMFDM, Nine Inch Nails, Lydia Lunch, PTP, Skinny Puppy and of course Ministry, Revolting Cocks, and the Finitribe.

Which character – as performed by Chris Connelly – was your favorite?

Connelly as Al Jorgensen:
Connelly's impression of Al Jorgensen is more sincere then perhaps a conversation with Al Jorgensen. I will just leave it at that.

An extreme reaction? Not really:
This book was highly entertaining. I would look forward to moments of downtime so I could pop in my earbuds and laugh along with the narrator. I like the fact that if Connelly found a memory funny he did not hold back his own laughter. (Though, Sometimes it seemed forced for the sake of story telling.)

stories of life on the road and in the studio

If you're a fan and/or musician (or just like listening to Scottish accents), you'll love it. This will give you a first hand look at what's involved with touring and recording in a rock band of Herculean excess, albeit from a safe and sanitary distance. Just when you think that's it, you also find out it's a story of humanity, love and friendship.

If you know Chris Connelly and are interested in his time as a Revolting Cock then this is the book for you. The Audiobook is pretty great because he cracks himself up and has to get reset to keep reading. Good times.

Connelly is very very good at this

He really should write books more often. The book itself is highly entertaining and the narration is hilarious. This book also confirmed everything I always suspected about Ministry. Thanks for a great book Chris.

More than a bio

This book is the closer we will get to an oral history of industrial rock in US. Beautifully delivered by Chris.

Pure entertainment with a heavy dash of nostalgia.

Connelly delivers a great performance reading through his memoir. The pace stays pretty good throughout taking you through the musical up and down down downs with a sordid adventure or two. Perfect for those that were there or wish they were.

Who's your favorite cock?

Love to hear stories straight from the (acid) horse's mouth (see what I did there?). Like this better than Jourgensen's inebriated accounts of what happened at the time. Plus, Connelly's impressions of the cast of industrial characters, help move the story and are hilarious to boot!

I was so excited to see that one of my favorite artists in the Wax Trax / industrial music scene, one who was an important member of a few of my favorite bands, wrote a memoir. I still have a lubricated, ribbed Trojan condom he threw in the audience the first time I saw Pigface. This book is juicy, fun, and absolutely hilarious! It is even more so read aloud in the author's voice accompanied by many throaty laughs. This book was a joy, and I highly recommend it. it really made me a bit nostalgic for a few wonderful times and a few wonderful places.

I love it...I was there for some of it...heard rumors of others...I ran away to stay clean and not die...lol...it is all very true. those were THE DAYS!