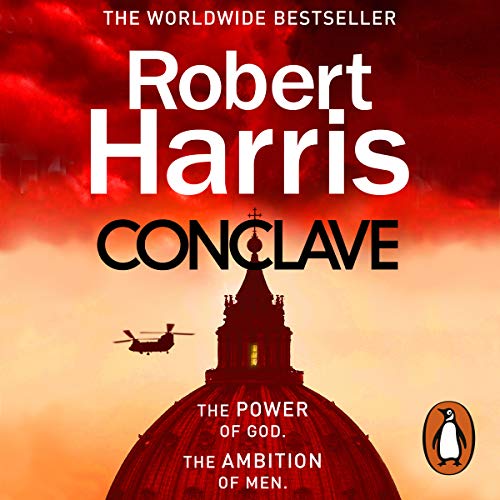 By: Robert Harris
Narrated by: Roy Mcmillan
Try for £0.00

What happens behind the closed doors of the Roman Catholic Conclave? The mysterious rituals surrounding the congregation of cardinal electors responsible for electing a new pope is brilliantly researched by Robert Harris, bringing an age old tradition to life. Set against the swirling of religious theory comes an explosive political drama that will have you on the edge of your seat.

The Pope is dead.

Behind the locked doors of the Sistine Chapel, 118 cardinals from all over the globe will cast their votes in the world's most secretive election. They are holy men. But they have ambition. And they have rivals.

Over the next 72 hours, one of them will become the most powerful spiritual figure on earth.

What listeners say about Conclave

Robert Harris is a fine writer but I was surprised at just how much tension he could put into the election of a fictional Pope. As someone with no real knowledge of Catholicism it was well sign posted and the end twist was unpredictable but signposted.

I cannot say what drew me to this book. However the story kept me enthralled. The twists and turns and the detail.

Factual about the Conclave and with an interesting storyline and ending.

How do cardinals elect a new pope?

Would you consider the audio edition of Conclave to be better than the print version?

I didn't read the book and enjoyed listening to the audiobook, which was presented very well.

The Conclave is a story about a fictional papal election, which takes place following the sudden death of a humble pope who introduced several changes to modernise the Catholic Church and provoked some controversy in the Curia by doing so.In the center of the story we meet Cardinal Lomeli, the Dean of the College of Cardinals whose responsibility is to run the conclave according to the Apostolic Constitution. He conscientiously guides the 118 cardinals - who gather from all around the world - through the process, while discovering and exposing unethical behaviour of a number of potential candidates. He is loyal towards the dead pope and ultimately protects the election process from negative influences with the aim to appoint a worthy Pontiff.

Have you listened to any of Roy Mcmillan’s other performances? How does this one compare?

No, I haven't listen to Mcmillan's any other performances.

This novel made me think. It gives some insight into how a real papal conclave might have run and features some of the current opposing views on terrorism and liberalism, both from the view point of the Catholic Church. The liberalist views resonated with me.As expected from an action-packed novel, the final twist leaves the reader wondering whether ultimately Lomeli can achieve his aim and what sort of message Harris would like to give to his readers. As such the story is open ended and helps readers to ponder on the challenges the Church and our society are facing in the 21st century.

Like all Robert Harris books, a rivetting listen. Without going into any details, it was clear that there would be a climactic finish, but the twist took me totally by surprise. Roy McMillan's narration was clear and measured, well-matched to the text. An excellent listen.

I was really surprised how much I enjoyed this boo

Its all about selecting a pope but its a melting pot of secrets and plots to secure power and conceal the truth.

I really enjoyed this story, it flowed and kept you wondering what would happen next right to the end. Excellent

In both the writing and the telling this book ticks all the boxes for me.

Good story. Loads of detail but never really had a climax.

Well narrated by Roy as always.

Conclave wasn't the story i was expecting from Robert Harris but I enjoyed it anyway, quite informative while remaining interesting.

Never thought I'd like this but the whole book is great. My only criticism is it was too short

Dirty doings at the Vatican

I've enjoyed nearly all of Harris's novels, especially 'Pompeii', though I found the Cicero trilogy very tedious and gave up halfway through. 'Conclave' deals in minute detail with the election of a new Pope, plus a mildly thriller type plot. As usual, Harris has done his research and provides plenty of twists and turns to his plot, though for the reader who is not a Roman Catholic, and takes little interest in the Pope or the Church's internal affairs, the reaction might well be 'Does it really matter, and why should I care?' It's hard to give any more details of the story without committing some serious spoilers, so I'll leave it at that. It did strike me that the current outrage at the sins of the Vatican, covered-up child abuse, is given a very easy ride; in fact it hardly figures at all. No, not one of my favourites. The reader is excellent.

Would you listen to Conclave again? Why?

Yes, mostly cause I fell asleep during one passage, but also because the book is so good

None in particular, all were realistic and well defined

What does Roy Mcmillan bring to the story that you wouldn’t experience if you just read the book?

Unusual book, well worth the credit

Excellent book with great detail and plenty of political intrigue within the Vatican. Narrator superb. Unfortunately, the ending was too contrived and brought me down with a bump!!

I found this book almost as good as 'The Ghost', that Robert Harris wrote some years ago.

Our Dean, in telling his own story is an exact and very likeable person who begins to take a few risks and moves away from his established comfort zone in order to do his 'job' well.
Do not expect 'leaping over tall buildings' or 'spy vs spy' or contrived plots. You as reader or listener may guess the outcome and it really does not spoil the story at all. Another story you may find is about a man we only meet as a corpse. There is an absence perhaps of the high drama of Harris's Cicero trilogy and for me 'Conclave' remains compelling.
If you have already read and enjoyed Harris's other books and wonder how the election of a Pope could stand up to his other works, my only response is 'this book is well worth your credit and your time'.