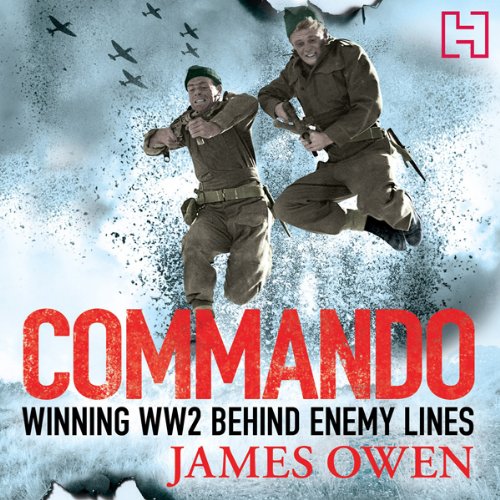 By: James Owen
Narrated by: Andrew Wincott
Try for £0.00

June 1940: As Britain's soldiers limped home from Dunkirk, a maverick Army officer was already devising a bold plan to hit back at the enemy. His idea was to revolutionise military thinking and change the face of warfare forever. Relying as much on stealth and guile as on courage and stamina, the Commandos brought to the battlefield the skills of the guerrilla. Trained by an unconventional band of experts, and led by a big-game hunter, a film star, a Highland chief and an eccentric wielding a bow and arrow, they became the spearhead of the Allied drive for victory. Weaving together official documents, new research, and veterans' own accounts, Commando reveals for the first time the exhilarating full story of WWII's most formidable fighting force.

What listeners say about Commando

quite the eye opener

It goes to show that the ruling elite once again played with the average soul pretty much as their plaything in pursuit of personal glory. Funny how junior ranks get the slightest of mention whilst giving a vivid pictures of the gentry.

that said the commandos were all very brave especially those that went back for more. god bless all of them.

It's a good book let down by a poor audio recording. Or more precisely, let down by the very strange and even confusing mis-pronunciations that feature very heavily in the recording. Some are just bizarre, but some also undermine the meaning, most particularly the way Boulogne (in France) is pronounced as Bologna (in Italy). Unless you already know otherwise, that makes for some very confusing sections,

Another outstanding piece of work. Very well researched and compiled. Inspiring stories of truly phenomenal achievements from who risked and sacrificed all. The narration is good and the accents are not bad.

This book is a must read for all serving and former Commandos. Definitely up there as one of my favourite books.

A excellent historical piece on the commando special force raiders throughout the Second World War . The narrator has you gripped by his tone from start to finish

Excellent book from start to finish

The book was well narrated, logically throughout out and kept the listener engaged. I thought I knew something of the inception of the Commandoes but this book really broadened it. It was especially interesting to hear a detailed account the cockleshell heroes, the raids on the Greek islands, the establishment of the Commando school and Heroes like Anders Lassen.

Not sure I took it all in so I plan to listen to it again, genuinely excellent!

Very informative. Accents could do with some work

A very full and interesting account about the commandos and its inception and the earlier raiding teams that come before. Some of the stories such as the SIG raids in North Africa I read about in Ghost Patrol by Damian Lewis. A very good book and although I liked the narrators natural reading voice I was not a fan of the constant changes of accent when attempting to impersonate a scouse manc or cockney soldier. Not necessary and sometimes the comical sounding accents detracted from what was being said. That said I would still recommend it.

What a Story of Men cut from a different cloth. The Commando Spirit and all they stood for. Men of such courage and fortitude. Highly Recommend one of the Best Books Ever on WW2 and these Men.

An amazing story of truly amazing men...told in a very objective way. The narration is excellent...you can imagine Andrew is a young commando officer himself, delivering a post op debrief...

And it’s a important tale to tell

I could only entre comments if I put one star down

After the first couple of chapters I was very excited to get into this book. What a shame I will never finish it.

What was most disappointing about James Owen’s story?

The author decided to disrespect the Australian troops. From this I could only ascertain that all the research would be invalid.

Can I get my money back?