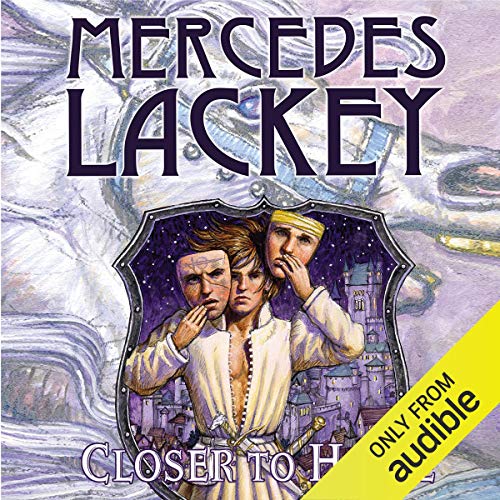 By: Mercedes Lackey
Narrated by: Nick Podehl
Try for £0.00

Mags was once an enslaved orphan living a harsh life in the mines, until the King's Own Herald discovered his talent and trained him as a spy. Now a Herald in his own right, at the newly established Heralds' Collegium, Mags has found a supportive family, including his Companion Dallen.

Although normally a Herald in his first year of Whites would be sent off on circuit, Mags is needed close to home for his abilities as a spy and his powerful Mindspeech gift. There is a secret, treacherous plot within the royal court to destroy the Heralds. The situation becomes dire after the life of Mags' mentor, King's Own Nikolas, is imperiled. His daughter, Amily, is chosen as the new King's Own, a complicated and dangerous job that is made more so by this perilous time. Can Mags and Amily save the court, the Heralds, and the Collegium itself?

What listeners say about Closer to Home

I have loved Mercedes Lackey books since I first picked up the Last Herald Mage series over 25 years ago. This book is a shadow of those early books. The characters have no depth and the storyline is entirely predictable. Such a shame.

So nice to go back.

It was like re visiting a favourite place going back to Valedemar. The characters are so real, you feel you know them and I love the concept of the mind communication with the Companions. Most go and get the next book right now!!!

I have read most of Mercedes Lackey's Valdmar series and this is the best one yet. I can't wait to read what happen next.

I like seeing how Mags grows throughout the two series, from the mine slave to the upstanding man he is in the book today,

Nick did awesome job telling the story. He really makes you feel like you are right there. I have recently had a lot of narrator changes in the series that I have listened to please don't change this one.

Great transition for this series

This book picks up on the Collegium Chronicles, and is able to move them forward. The kids/students are now fully vested in their roles in life. I am surprised how smoothly this process went. The book is enjoyable and I am just waiting for the next book to come out.

Not one of my favorites

I love the Valdemar series and have read them all many times. This is definitely not one of the better ones. All the whining and self pity from Violetta gets old, and the family feud is a bit of a tired and predictable plot. Hoping for better from the rest of the series.

Well written with great use of the English language. The whole collegium series is perfect for high school students and higher.

Excellent! I have "read" 6 so far and will continue in with the story!

I am so happy ms. Lackey had continued the tales of mags.
thank you so much please continue

Bad play on Romeo and Juliet

While I like the Foundation and Herald Spy series in general, starting around chapter 5, this book starts down a path of a bad play on Romeo and Juliet.
Two houses that have a blood feud are both at court at the same time, both trying to get their children married off, a boy and girl from each house seem to get together, and then it all goes down hill from there. This is of course followed by blood and betrayal with the whole book ending on a sour note.
I really only keep the book because the first couple chapters are good and it ties the Foundation series to this one.

although this book was well written it was indeed not my favorite of all the herald mags series. I believe it has more to do with the storyline and the content then they writing.

I put off reading this since I wasn't too impressed with all the flashbacks in the collegium chronicles / Mags' stories, but Lackey really aced it with this book. a slightly more realistic Romeo and Juliet meets Valdemar.

What was one of the most memorable moments of Closer to Home?

The prince tossing Amily onto Roland's back

Have you listened to any of Nick Podehl’s other performances before? How does this one compare?

I've enjoyed the entire series so far. I tried to read one and the dialects drove me nuts on paper. However, the narrator is excellent and this is a great series for commuting!

This series is very enjoyable. Nick Podehl narrates the story just as I heard it in my head when I read it years ago. My favorite parts are the character interactions as they build on their herald training and grow with each experience. The action parts are just the right length and the romance sweetens the story as well. Read the series in order as it greatly adds to your insight to the characters. Thank you Mercedes Lackey for another fine experience.