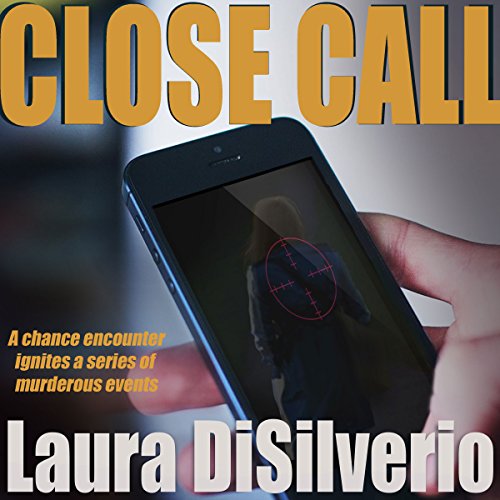 By: Laura DiSilverio
Narrated by: Emily Emerson
Try for £0.00

After living through the media shaming of a political sex scandal when she was in college, Sydney Ellison fears notoriety above all. So when she stumbles onto a plot to assassinate a senator, she resists contacting the police. Before she can make herself do the right thing, the assassin tracks her down and kills her fiancé. Now a murder suspect and a killer's target, Sydney reluctantly enlists the aid of her estranged sister, who betrayed her fifteen years earlier. Sydney must overcome her distrust and put all she has worked for on the line to stop the killer and his employer before more people die.

What listeners say about Close Call

I enjoyed this one

Great story and easy to listen to. Solid characters who stand up on their own. I looked forward to listening to this story on my drive to and from work. There is a fun twist at the end.
I was given this free review copy audiobook at my request and have voluntarily left this review.

The narrator did a wonderful job on bringing alive all the characters. The story itself was chilling and intense. The plot was excellent and you did not know what was going to happen next. Would recommend this to all who love a good murder mystery.

Laura weaves an intricate plot with several subsets and the book covers the gamut of suspense and intrigue between family, politics, meaningful occupations and love.
It was difficult to stop listening to the book to do other chores.
The narrator performs the story well and she enunciates the different characters voices in a way that you know who is speaking, and makes the story easy to follow.

How could picking up the wrong phone be deadly?

Close Call by Laura DiSilverio begins with something that could happen to any of us - Sydney Ellison picks up the wrong phone in a deli. She doesn’t realize her mistake until she gets a call on that phone talking about murder. Sydney’s first reaction is to just ignore the call; it must be a prank, right? And suddenly she is drawn back to a past she thought she’d left behind for good and that innocent mistake of picking up the wrong phone – and the possible confusion of the caller about her name – Sydney, Syd? – becomes much more than a mistake. Now it’s a cat-and-mouse chase with life and death stakes.

Close Call is a thriller with many layers and unexpected twists and turns. The plot is solid, well-developed, and fast-paced. The story is rich in detail about all of the very compelling characters, making it impossible to simply like or dislike them or characterize any of them as good or evil. Sydney is stubborn, hardheaded, often impulsive. She thinks she’s moved on but she won’t let much of the past go. She’s also loyal and dedicated and brave, but that impulsive rush to action without thinking has serious consequences. She is responsible for much of the danger to those around her because she has a need to act. The story very effectively switches back and forth from Sydney’s point of view to that of the hitman, Paul. The suspense builds to an ending I didn’t see coming, although when I thought about it, all the clues were there. The locations are richly described. You feel are there, in danger along with Sydney or trying to plan your next move with Paul.

I received an audio copy of Close Call from the author and have voluntarily left this review. The story is riveting, with more and more layers being revealed as each chapter unfolds, making it ideal for an audiobook. The narrator is skilled and easy to listen to. I didn’t want my daily walks to end. I highly recommend Close Call.

LOVED IT!!
I love Laura DiSilverio's writing! It has an intriguing and old-style gritty quality that I love! Great edgy/cool characters, great story, and the narration was amazing. I've listened to The Reckoning Stones prior to this one, and can see her talent in both. This is one that I could not stop listening to, I found myself in the slow lane (which I HATE as a long commuter LOL), wanting to get to work or back home just a few precious minutes later so I could listen to more. I love stories on the longer side, I love to "get in deep" as they say lol. Absolutely chilling story!

This is a fantastic murder mayhem mystery, and is great from beginning to end. I was swept away, dragged under and spit back out into the world. It was a great experience, I highly recommend it (and also The Reckoning Stones!), I'll be searching for more of Laura's titles!
I was given this free review copy audiobook at my request and have voluntarily left this review.