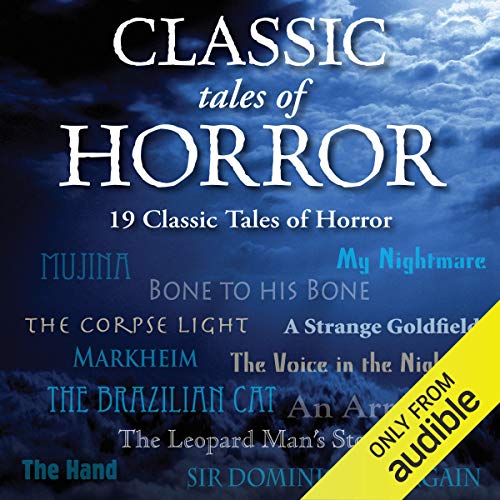 Nineteen stories of the supernatural:

What listeners say about Classic Tales of Horror

This is an excellent collection. The readers are all serious professionals. But more than that: they've all taken the time to deliver well thought out, intelligent readings. The reading of "The Voice in the Night" by Sean Barrett is exceptional.

Kept on falling asleep, so the narrator must have been good !
Those I listened to were excellent!
Happy new year!

a nice mix of stories

This should be titled Classic tales of Intrigue!!! Some of the stories are quite good, but none of them hold anything fantastic or scary. Although the author list is very impressive all you are likely to get is the occasional shiver and that's about it. Unless this book is on offer, I would suggest you give it a miss.

This audiobook gives you over seven hours of classic horror with great narration....what else can you ask for!?! I am always on the lookout for any sort of classic horror/ghost story, and this selection did not dissapoint! I enjoyed most of the stories, some of which are so-so. However, the narration of the majority of them was top-notch. I especially liked The Brazilian Cat and The Voice in the Night. Great stuff from great authors. Pick this one up!